If ever there was a team skilled enough to capture the beauty of Banff and Ski Big 3, Sherpas Cinema is surely that team. Their meteoric rise to the top of the action sports heap began with 2011’s All.I.Can; a ground-breaking ski film featuring the legendary JP Auclair Street Segment.

So when they teamed up with Ski Big 3 for a profile of Banff, Lake Louise, Sunshine Village and Norquay, they wanted to offer a little more. And they did. Working with the celebrated spoken word artist Shane Koyczan, they created a visual and audio love note to one of Canada’s oldest and greatest National Parks.

With five seasons worth of footage in the can, the Sherpas set to editing, using Koyczan’s words as inspiration.

“The words Shane wrote weren’t simply the complement to the footage we were editing, or the story we were telling–but were completely shaping it,” says Sherpas post production supervisor Tim Symes. “Shane’s poem set our whole narrative. As filmmakers, we were being guided by the beautiful words of Shane, with the words ‘Look Up’ then becoming the title.” 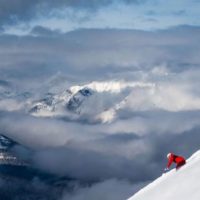 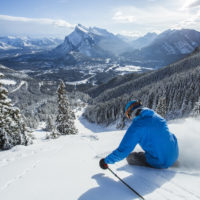 RIP LIKE A LOCAL: SKI BIG 3 NOW OFFERING GUIDED ADVENTURE PACKAGES
There’s nothing like your home resort; you know where the powder stashes are, when the out-of-towners will arrive, which lift-lines to avoid and where après is. You’ve spent years doing your research and you have it absolutely dialled. That’s what sucks about going to a new resort; you don’t know anything about it. A total noob. Ski Big 3’s new Guided Adventure Packages eliminate that dilemma… Read more