When adaptive skier Rob Roest slides his sit ski down Easy Rider you witness the reason we all hit the slopes: it’s damn fun. His ear-to-ear grin is a testament to that. The 32-year-old has a long history with Blue; he started skiing with the Blue Mountain Special Olympics Alpine Team 20 years ago. Using outriggers (like ski poles with short skis attached to the end), he skied upright for 15 years. But recently his cerebral palsy led to major knee surgeries and he can no longer walk. Thankfully, because of the adaptive ski program, Rob is still able to get out there. 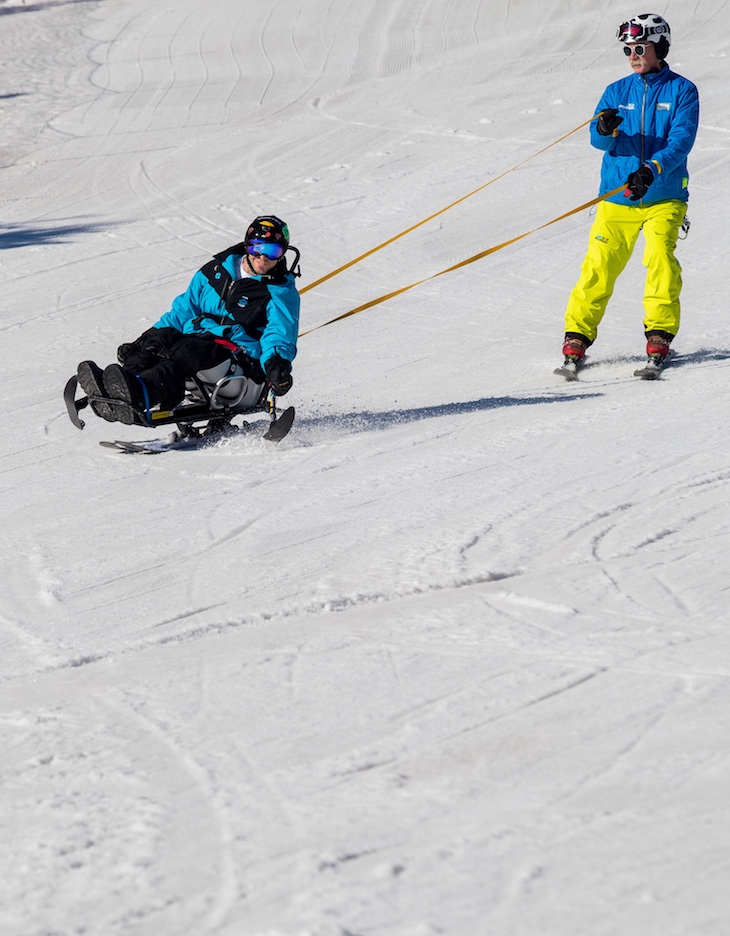 “I pitched the idea of starting a program, just as Blue Mountain was thinking they needed a program,” Sim recalls. “That first season in 2016/2017, it was really just trial and error. We entered the season with no lessons booked, but it picked up as we went along. I’ve got 12 people ready to book for this year.”

Few resorts offer this kind of program, and Blue Mountain’s model is really just an extension of the ski school; if you’re disabled in nearly any way, Blue’s ski school has the gear for you. Simply book an hour, 90-minute or half-day lesson and they’ll take care of the rest. Rental equipment included. At the same cost of a regular lesson/rental package.

“We have six sit skis,” says Sim. “They start at $5,000 and go up to $20,000. Through some connections we had, we managed to have equipment loaned to us and we’re looking at adding to the fleet as we go on. We also have about a dozen pairs of outriggers.”

Most adaptive ski programs are run by non-profit charitable organizations. And they’re great. But they have limitations.

“In the Blue Mountain–Collingwood area there are a couple of programs. One is Track 3 which is a program that runs every week and usually kids come up from Toronto and they ski every Saturday or Sunday. It’s an eight-week program, they have quite a big waiting list and once you’re signed up for the eight weeks you’re in the program. Once you’re in, you can keep coming back, so it’s hard to get the waiting list down because nobody ever voluntarily leaves the program.”

And why would they? Because, like we all know, skiing is damn fun. Blue’s program is designed to fill that void.

“We’re more of a one-off type lesson,” he says. “So if you’re coming up to Blue Mountain with your family or yourself, you can book a lesson and get out there. And if you decide to book more lessons you can carry on that way. If you want to do a one-off that’s fine too. That’s what we’re trying to achieve: offering something to people that can’t get into those programs. Come here, book a lesson and you’re good to go.”

A community-building effort, the adaptive ski program goes beyond dollars and cents.

“If you’re in a wheelchair all winter, and you get in a sit ski and fly down at a faster speed than you would ever go in your wheelchair,” says Sim, “it’s pretty freedom-enhancing.”

And one look at Rob Roest’s face will tell you he agrees 100 percent. 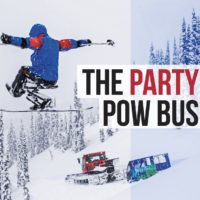 THE PARTY POW BUS: JEFF SCOTT’S BREAKTHROUGH IN ADAPTIVE BACKCOUNTRY ACCESS
They call it the Lunchbox. It’s a one-of-a-kind trailer designed to be towed behind a snowcat. It holds four sit-skiers and is about to embark on its inaugural test run in British Columbia’s Monashee range…. Read more