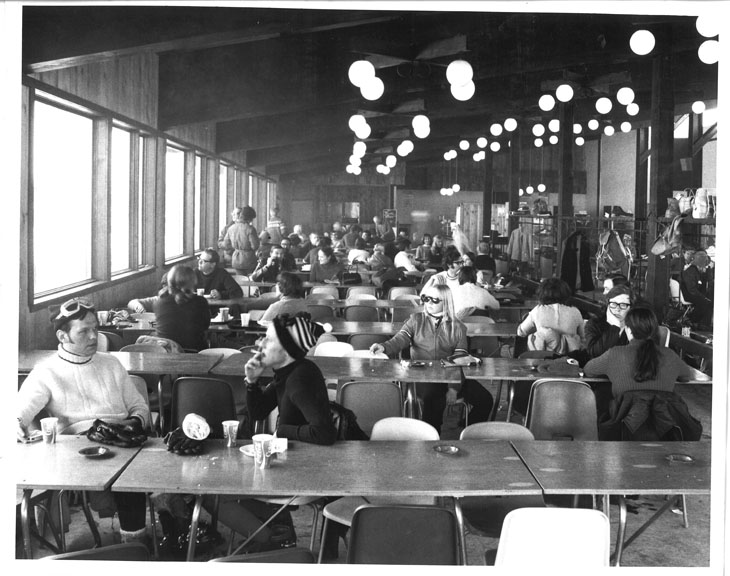 42. BEV PHILP
Bev Philp joined BMR as a hill hostess in 1976 and assisted with marketing projects until becoming Vice President of Marketing in 1983. Among her many achievements and projects, she introduced the popular 5×7 season pass in 1998 and was on the Start Up Committee for Memory Lane Park. She retired in 2014. She’s pictured here in the early 1980s, testing out the Blue Mountain Inn’s newly revamped facilities.

43. PRIME REAL ESTATE
Apple Bowl Chair, 1970s. The snowswept fields in the background are now occupied by the Village, and the snowmaking reservoir is now the Mill Pond.

44. ON DUTY
Ski patrollers Shirley Rhodes and Linda Fitzgerald at the base of North Poma, 1962.

45. YARD SALE
The “joke wipeout” that keeps on giving.

46. THE BANDSHELL
A precursor to the open-air Village Plaza concerts of today, the Bandshell stood beside the old Central Base Lodge in the mid ’70s and hosted such musical luminaries as Moe Koffman, Lighthouse, and The Good Brothers. BMR

47. K-WAYS & TIGHTS
From K-Ways to mustard ski tights, there’s a lot of style going on in this deep-Seventies shot. So we decided to let you choose your own caption.

49. IN THE ZONE
Riding the T-Bar, happy together, no hats required.

50. BLUE & THE SPECIAL OLYMPICS
An event that holds a special spot in Blue Mountain’s collective heart, the Special Olympics World Winter Games came to Collingwood in 1997, co-hosting over 2000 athletes from over 90 countries, leading to the founding of the largest program of its kind in the world. BMR has sponsored the event, the organization’s 40+ volunteers and over 30 athletes since the beginning. 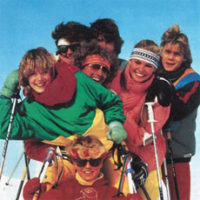 FROM THE VAULT: CELEBRATING 75 YEARS OF BLUE MOUNTAIN RESORT—PART 4
BMR founder Jozo Weider oversaw the construction of this 50-metre jump just a year before his death in a car accident in 1971. The jump was named in memory of Pete Pettersen, a Norwegian who had developed ski jumping programs in Ontario in the 1950s. The jump was the site of the North American ski jumping championships… Read more