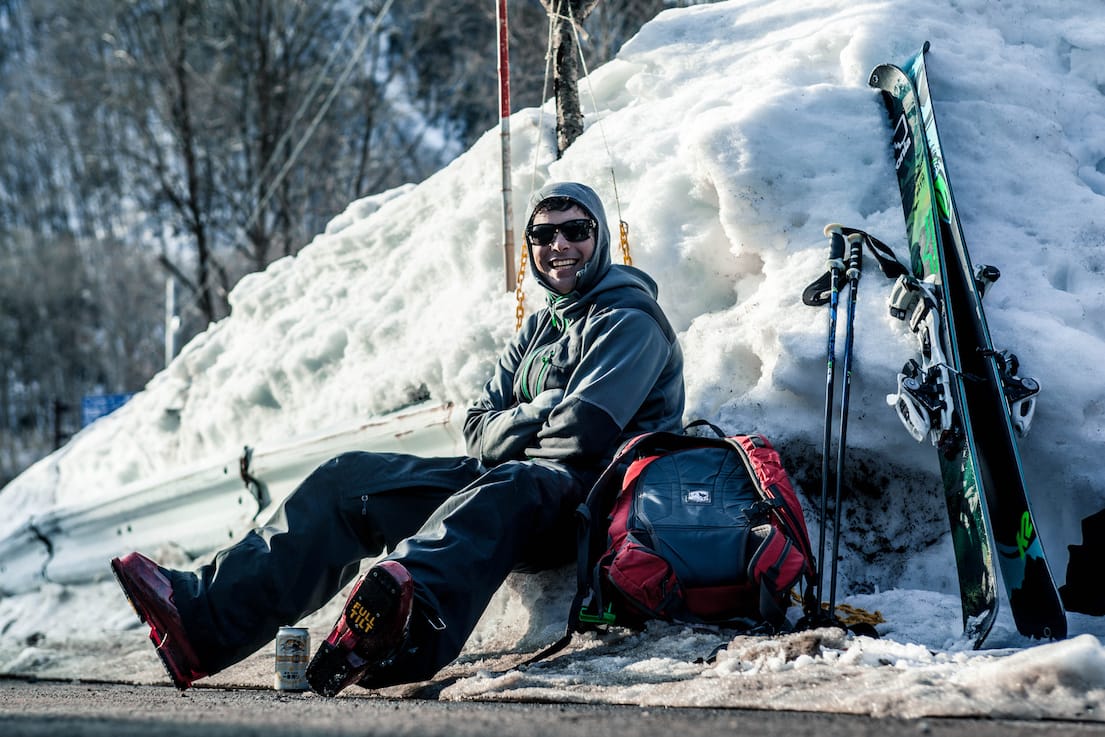 The Man Who Turned Used Gear Into a Career

There were no smartphones in the spring of 1998. No internet apps with up-to-the-minute snow conditions or live updates from the Pontiac Freeskiing Challenge being held on Chainsaw Ridge—a steep, jagged, sphincter-puckering patch of terrain high on Blackcomb Mountain. There were no drones filming, and not a single POV camera affixed to the helmets of the competitors—which included pretty much every single one of Whistler’s best young skiers, as well as some big names from south of the border. There was, however, $10,000 cash up for grabs and a chance to prove your stuff. In those days that was more than enough to guarantee a good show, you just had to show up.

After two years in college in Seattle, Phillips had accumulated enough funds to drop out and move to Whistler for the winter to ski every day, get disqualified from freeski comps, and get serious about skiing as much as possible. Which is exactly what he did.

Only 20 years old at the time, Oregon-born Bryce Phillips was not one of the big US ski stars. He was an unknown kid who’d lucked into a volunteer job on Blackcomb and was living a ski bum lifestyle financed by money he’d made selling discontinued ski jackets procured from K2 while interning in ski marketing.

“I bought hundreds of jackets and backpacks,” Phillips remembers. “Full retail on the jacket was something like $200, wholesale it would be $100. I got them for 12 bucks each—I could sell them in consignment stores and make $50 or $60, or sell them myself for $100. That paid for my first year in Whistler.”

“Next to those guys I didn’t know how to ski,” Phillips admits. “I just flung myself off cliffs and held on. I ended up skiing a line that was deemed out of the contest boundary, scraped off a sketchy bit of snow, hit an air and made it to the bottom. I ended up winning the equivalent of a “Sick Bird” award and the team manager from K2 told me he’d give me a free pair of skis which led to shooting photos, filming and eventually travelling as a pro. But the best part was I started skiing with all those guys from the comp… that line started everything.”

Peter Smart, Whistler legend and organizer of the Pontiac Challenge, remembers Phillips’ line choice that day. “I remember it specifically. He went skier’s right of the couloir, way beyond the boundaries of the comp. There was a little notch and a drainage in the cliffs you could land in. We ended up including it in the competition the next year, but in that moment he was sketching us out—he made it though. To look back and judge how he skied that day, it’s the same way he is with business. He was confident, aggressive—and regardless of his ability, he was gonna go for it.”

That tendency to “go for it” helped Phillips build himself a pretty decent pro ski career, but his greatest impact on the sport has come from the lines he’s chosen in the world of business. Bryce Phillips is the founder and CEO of evo, an online retailer of outdoor gear with flagship stores in Seattle, Denver, Portland and, new this season, Whistler. Last year, evo sold more skis and snowboards than anyone else in North America. And, like Phillips’ life on skis, the business has deep Whistler roots.

“My uncle Jack introduced me to skiing back in Oregon when I was ten,” Phillips says. “And in eighth or ninth grade I got my first pair of skis—used Atomic Arcs with Tyrolia bindings for 80 bucks. I was so stoked, my very own skis. I didn’t care that they were used, that was what allowed me to afford them.”

That purchase, and the feelings of freedom those skis opened up, left an impression on Phillips and ignited an entrepreneurial spark. Throughout his teens he continued to hunt out deals on gear he could sell for a profit. “Garage sales, classified ads… I was constantly buying and selling stuff so I could afford lift tickets or soccer cleats or whatever I was into. My folks have always been amazingly supportive, but we didn’t have the financial resources so I had to figure out how to make it happen.”

As a sophomore in high school, Phillips found a store going out of business and purchased 12 pairs of ski boots for 90 per cent off, then sold them to kids at school. Bargains like that kept him in lift tickets for the rest of high school and eventually lead the way to that infamous K2 ski jacket deal. After two years in college in Seattle, Phillips had accumulated enough funds to drop out and move to Whistler for the winter to ski every day, get disqualified from freeski comps, and get serious about skiing as much as possible. Which is exactly what he did.

By 1999 however, very few (if any) professional freeskiers were being paid enough to live, even by ski bum standards. So, as he prepared to return to Seattle for a summer of work, Phillips ended up in Spicy Sports, a collection of Whistler shops that would sell off their rental and demo skis each spring. With his history of buying and selling, Phillips smelled opportunity—thanks in part to a new website he’d heard about called eBay.

“At the end of the ’90s eBay was really firing,” he recalls. “People were in bidding frenzies on these auctions and it was the only thing going—Amazon was still only selling books. Plus, the US exchange rate was crazy high. So I could buy 100 pairs of skis for 100 bucks each, but I’d get them for 65 bucks US. That worked in my favour and soon I was buying from everyone and selling them on the internet, or out of pop-up shops I’d set up in roadside parking lots. I had a UPS printer in my garage and my only other expense was a pager and a car worth about 2,000 bucks. No other bills.”

Still skiing professionally all winter, Phillips began spending most of his off-snow time buying, cleaning, selling and sourcing used skis and snowboards. He says he found a certain sense of achievement in the practice, one that reminded him of his first days in the mountains.

“Used gear is not the sexiest thing, but it’s rad, it gives people easier access to the sports they love. Skiing, snowboarding and mountain biking are not easy to afford; used gear helps people find a way. Who ever starts a sport with all the latest and greatest brand new stuff?”

By 2001, still wintering in Whistler, Phillips knew he needed a website of his own. “I had no tech capabilities, no tech background. I was literally selling out of my garage and off the side of the road. So I worked with Mark Simon, a fellow Yankee living in Whistler, to build evogear.com—that was a pivotal stake in the ground.”

With a website up, Phillips did $300,000 in revenue that year, and began sourcing demo and rental gear from the big American resorts as well. By 2004 business was so busy that, after seven straight years of Coast Mountain powdery bliss, he didn’t move to Whistler for the winter. He had a store to open and a new business to build, one based in the culture of true mountain living he had been entrenched in since getting those first Atomic Arcs as a child.

“We blurred the lines between retail—new and used—and art, music, film, galleries and community,” Phillips says. “In 2005, when we opened the first store, I identified that there was no gathering place for those of us who really loved the sports and the lifestyle. That first warehouse in Seattle was as much a community centre and venue as a store.”

Phillips began developing a set of values to guide every part of evo—online, in the store, on the mountains and beyond. Rooted in respect, balance, giving back, and what he describes as “a restlessness to take smart risks, embrace failures and work relentlessly to improve ourselves,” Phillips humbly created the foundation of an outdoor sports empire. During the biggest days of the year, evo will sell as much gear in a single hour as Phillips did that entire first year with the website.

“The business of buying and selling is not new,” Phillips says. “Our approach and the way we engage the community is what differentiates us. We didn’t reinvent the business, we reinvented the experience—it comes from a place of commitment and passion.”

The evo campus in Seattle is also home to restaurants, a skatepark, giant murals and plays host to everything from underprivileged youth fundraisers, musical performances, film premiers, backcountry seminars and more.

“I’m really proud of the skatepark,” Phillips says. “It’s such an awesome, inviting welcoming, healthy place for the community to come together.”

There will be no skateparks at evo’s Whistler locations, but after spending the entire summer up here with his wife and two young children, Phillips is visibly excited to be back in his second home. And the full-circle vibe of buying the Whistler shops that he used to purchase used skis from is not lost on him.

“Whistler is where it all started for me,” he says. “And Dave Milley, who owned Whistler Village Sports was part of my journey right from the beginning—I first purchased his used demo skis 20 years ago. We’ve always built relationships and the evo culture around shared passions. Dave and his team are really fantastic, they get it.”

As a pro skier, Phillips travelled to Europe, Japan, Argentina, and across all the best North American powder stashes. Thinking of those simpler times, he is quick to grin and point out that opening a handful of stores in Whistler will certainly translate to more days riding the mountains he loves. But what gets him the most stoked about returning home is seeing people still living like he and his friends did back at the turn of the millennium, before anyone thought of
using the internet to sell skis, boards, boots or anything else.

“It’s amazing to see people living modestly, so happy and inspired to have access to the outdoors and these mountains,” Phillips says. “I think back to that first freeskiing comp on Blackcomb, meeting people that would become some of my closest friends—and they are still living throughout the Sea to Sky today. While a lot has changed, in all our lives, and evo has become much more than a scrappy, used-gear, garage startup, so much has stayed the same. This life and culture isn’t about the gear or toys we’ve been able to accumulate. It’s about the commitment, camaraderie and passion for the sports that we all love.”

New/used, past/future, skiing/business—when you see a line you like, you gotta go for it. That’s evolution. —ML