Skadify your winter with the new issue of Mountain Life Blue Mountains! Discover the story behind Stu MacKay-Smith‘s astonishing cover illustration of a forgotten Norse goddess, Skadi. Then scroll on for Editor-at-Large Colin Field‘s Liftoff. 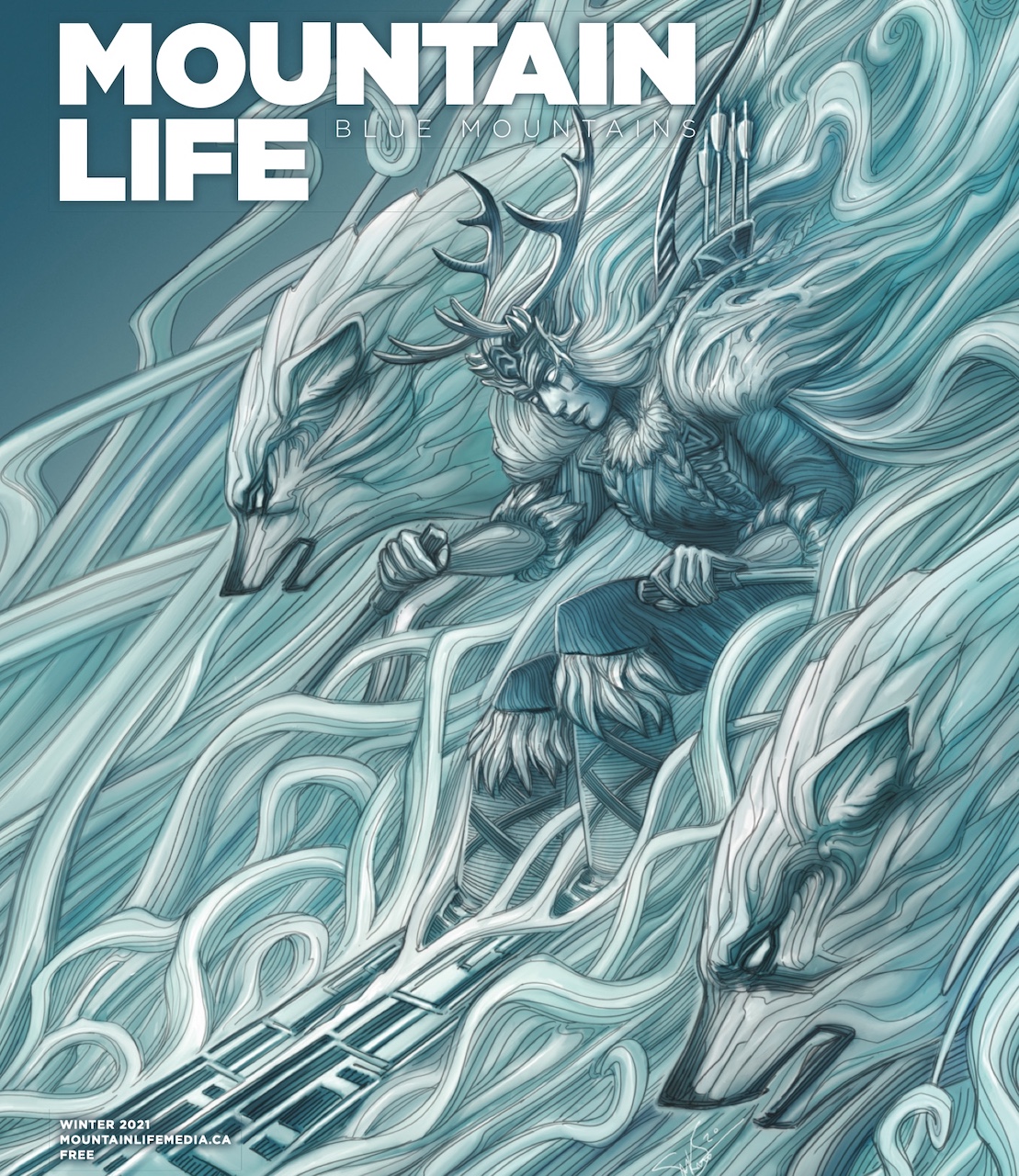 If we dig back in time, below the rich, rotting topsoil of the patriarchy, we’ll find the goddesses and gods Christianity tried to bury. Among them is Skaði (often anglicized as Skadi), a Norse ski goddess associated with bowhunting, skiing, winter and mountains.

While not a household name today, Skaði shows up in nearly all the surviving Norse mythological texts. These oral stories were passed down for two centuries before being written down in the late Middle Ages. And in all of them, Skaði is a force to be reckoned with.

Skiing as She Pleases

Skaði storms Asgard (home of the gods) and demands revenge after her father is killed in a tit-for-tat with Loki the trickster. The gods offer her compensation, the most enticing part being that she can pick a husband from the gods—but she’s only allowed to choose by the sight of their feet. She picks the best-looking pair, hoping for the handsome Baldr (son of Odin, ruler of the gods), and winds up with Njörd, god of wind and sea.

It proves a poor match. Njörd is from the coast, and Skaði the mountains. They attempt to inhabit each other’s domains but Njörd can’t sleep through the howling of the wolves, and the chattering seagulls are enough to make Skaði jump ship on the marriage. She returns home to Thrymheim “where the snow never melts” to ski and hunt as she pleases.

If we’re going to unearth Skaði’s legend, let’s do it right. Bring on the character-testing missions in the backcountry full of punishing climbs, gnarly descents, and midnight howls with the wolves (all between swigs of ice-cold vodka, her favourite). Done right, a pre-season Skaði party sounds a lot more badass than a typical Ullr shindig, and it might even bring us more snow.
–Nikkey Dawn

Artist Stu MacKay-Smith has reimagined Skadi for 2021. “We knew we wanted to do something different for this issue,” he explains, “so I thought a hand-drawn approach would be interesting and [Mountain Life Creative Director] Amélie Légaré suggested the goddess Skadi would be the perfect subject matter.”

“Skadi is also known as ‘Sister of Wolves’ and Ondergud (God of Skiing). She’s a badass Viking giantess who is associated with independence and self-reliance, and bit of revenge.”

“One of the timely aspects that I like about Skadi is that she symbolizes the toughness of winter and the preparation for spring. She serves as a reminder that we must go through a period of stasis in order for rejuvenation to occur.”

I remember it like it was 30 years ago. I recall being on the lift with my buddies, laughing and yelling. It was a Grade 8 ski trip. I can’t visualize who was on the chair, but there was definitely denim. It was mid-week and barely anyone was on the hill. For a group of pre-teens this was the height of fun.

Halfway up the chairlift, we spotted the best jump on the hill. The groomer had created a perfect little lip right under the chair. It wasn’t much, but we didn’t need much.

Of course, you’ll only know this if you were around 30 years ago, and anyone younger will find this impossible to believe, but in those days you weren’t allowed to jump. In fact, they’d punch your ticket if they caught you. I’ll repeat, you were not allowed to jump. Imagine that. We knew the rules, but finding that jump was like being told not to eat the marshmallows in our hot chocolate. The temptation was too much to resist.

So we hit it a couple times, getting a little more confident with each subsequent hit. We were maxing out at about 12 inches of height and four feet of distance, but it felt amazing. And we couldn’t get enough.

On my fourth or fifth hit, I landed too far forward and slid to the hardpack. I felt my ski pop off. With the ski dangling from its leash, I fumbled wildly trying to get back in. I looked around for a friend to help, but they were all gone. The only person approaching was one I didn’t want to see. A ski patroller. He was offering his assistance. But only after punching my lift ticket.

I looked around for a friend to help, but they were all gone. The only person approaching was one I didn’t want to see. A ski patroller.

He helped get my ski on and escorted me to the lodge. I could hear my friends’ taunts from the chair above. It was the most humiliating moment of my then-short life. I spent the rest of the day in the lodge with my home-ec teacher, Mrs. McClure. It stung knowing my buddies were ripping around the hill having the time of their lives. I nearly regretted jumping.

As a kid, stuck in that lodge with a chaperone three times my age, there was no rhyme nor reason to the rule that put me there. It was a total injustice. It’s difficult to believe that jumping was a ticket-punching kind of infraction. How do you even police that? What if you hit a mogul and accidentally catch air? What if the terrain lends itself to getting airborne over a knuckle? It’s ridiculous. The only thing it taught me was if you’re gonna jump your skis, don’t crash—and don’t get caught.

Leaving the Earth Behind

Thankfully, these days you’re allowed to jump your skis. Heck, they have entire runs dedicated to getting your P-tex soaring through the air. Not only that, they allow snowboarders on the hill. Imagine!

If there’s something to be thankful for in 2021 it’s that you’re allowed to jump your skis (you may have to earn your own turns though). My banged-up boards will be leaving the ground as often as possible this winter. Probably not much higher or farther than they did all those years ago, but that’s fine. It’s the feeling of leaving the earth behind, if ever so fleetingly, that I’ll be chasing. It isn’t much, but these days I’ll take joy anywhere I can find it. See you on the slopes.
–Colin Field