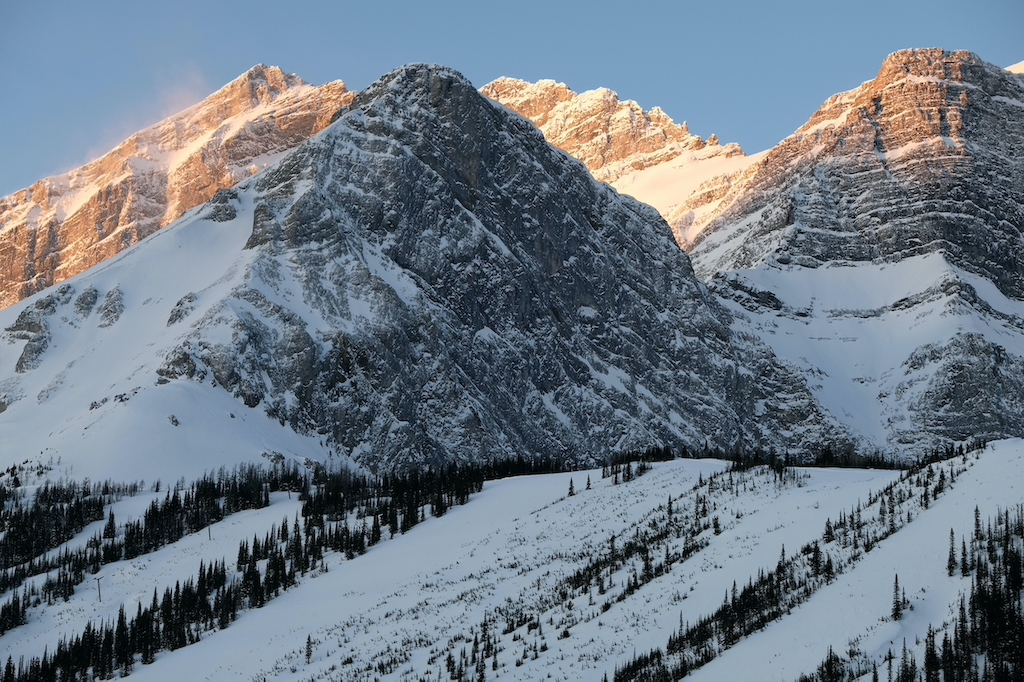 Fortress Mountain in K-Country was an operational ski area between 1967 and 2007 and etched itself into Alberta culture as an indelible icon of powder skiing and adventure, strongly rooted in the regional ski lifestyle. It is forged into folklore since its closure and the subsequent production here of many Hollywood films. We’ve seen Leonardo Dicaprio twice up here (filming Inception and The Revenant) and Liam Neeson residing in a cabin on one of the ridges while filming Cold Pursuit. The actor Kevin Hart was astonished at the beauty of the region while filming Jumanji 2 at Fortress. Many Alberta ski areas have iconic views of the mountains at a distance but Fortress sits on the shoulder of giant peaks, very closely nestled into their stormy embrace.

Fortress is forged into folklore since its closure and the subsequent production here of many Hollywood films.

I find myself driving in the early morning glow of the alpine on the old Fortress road that was rebuilt for the film productions. In my mind, I am recreating a scene from The Shining as I push on the gas pedal to unknowingly ascend a snow-covered road through avalanche paths and indelible scenery. The drive is increasingly snowbound as the banks increase in height as I approach the decommissioned pyramidal 1967-designed ski lodge which is buried under snowdrifts with a stream running through it. One can’t help but feel like you’re in a post-apocalyptic science fiction film as nature has reclaimed many old structures of the dormant ski area.

KPOW is a new vibrant overlay to the old Fortress Mountain operation. KPOW operates a 14-person snowcat to access 3300 acres of old ski runs covered in a blanket of knee-deep, cold Kananaskis powder. This snow is unique as much of it is wind-deposited and is known as “wind sift,” a soft crystalline surface that skis glide through for an exhilarating experience.

One can’t help but feel like you’re in a post-apocalyptic science fiction film as nature has reclaimed many old structures of the dormant ski area.

The managers Chris Mueller and Chris “Chev” Chevalier have been in the ski industry their whole lives and are widely known Banff ski legends. Their passion for the new Fortress development project is evident. As Mueller says, they “love cat skiing but are in this to rebuild a resort.” Their collective experience in snow safety, wilderness medicine and ski area operations is unsurpassed. 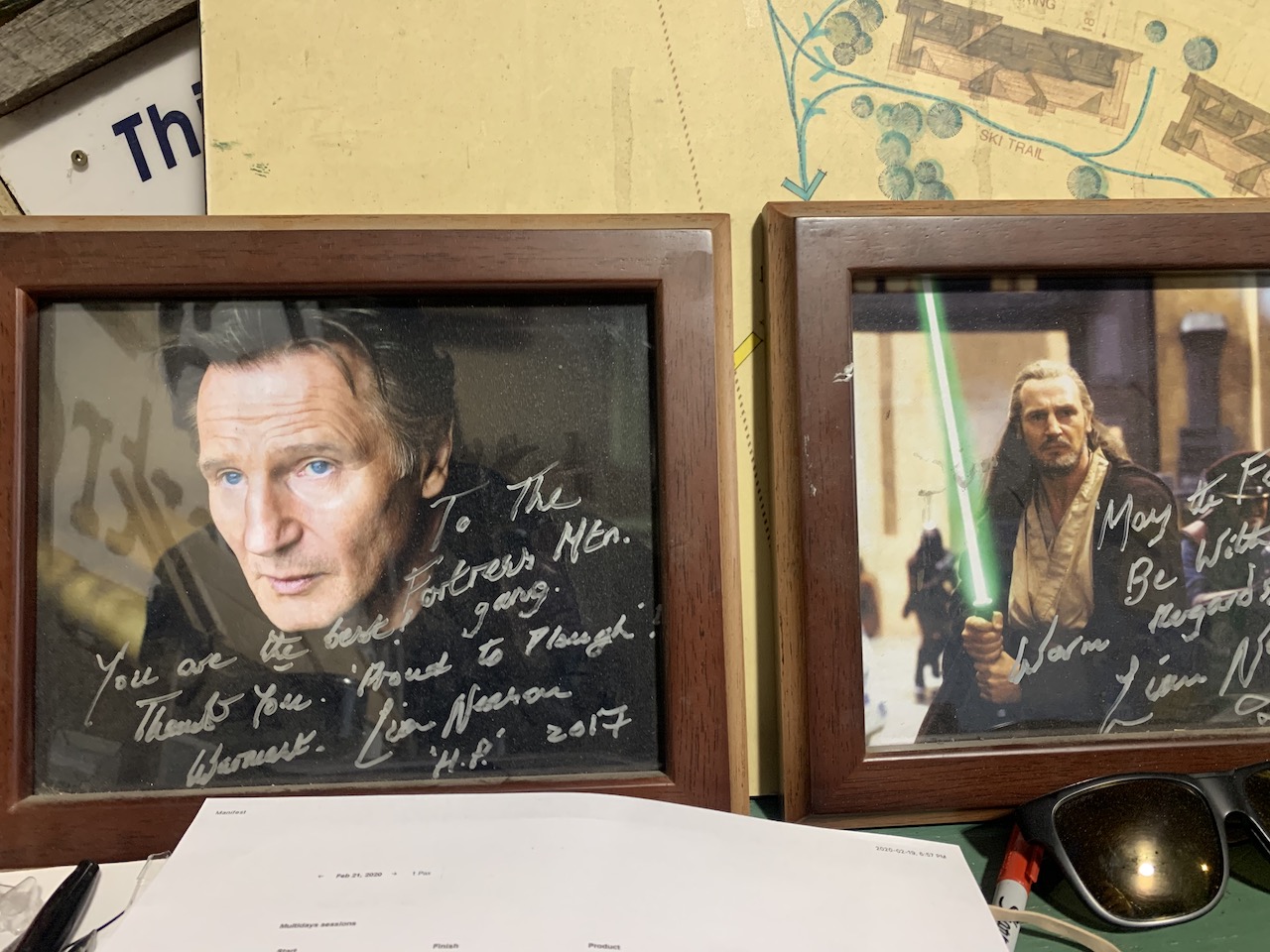 The modest, old service bay that is their welcome centre for cat skiers is warmed by a woodstove with apple strudel sitting on it. The room is adorned with Fortress trail signs from the old days as well as an affectionately signed photo of Liam Neeson. An older caretaker/ handyman named Mel has resided on the mountain for 35 years and welcomes guests as a local historian and storyteller. 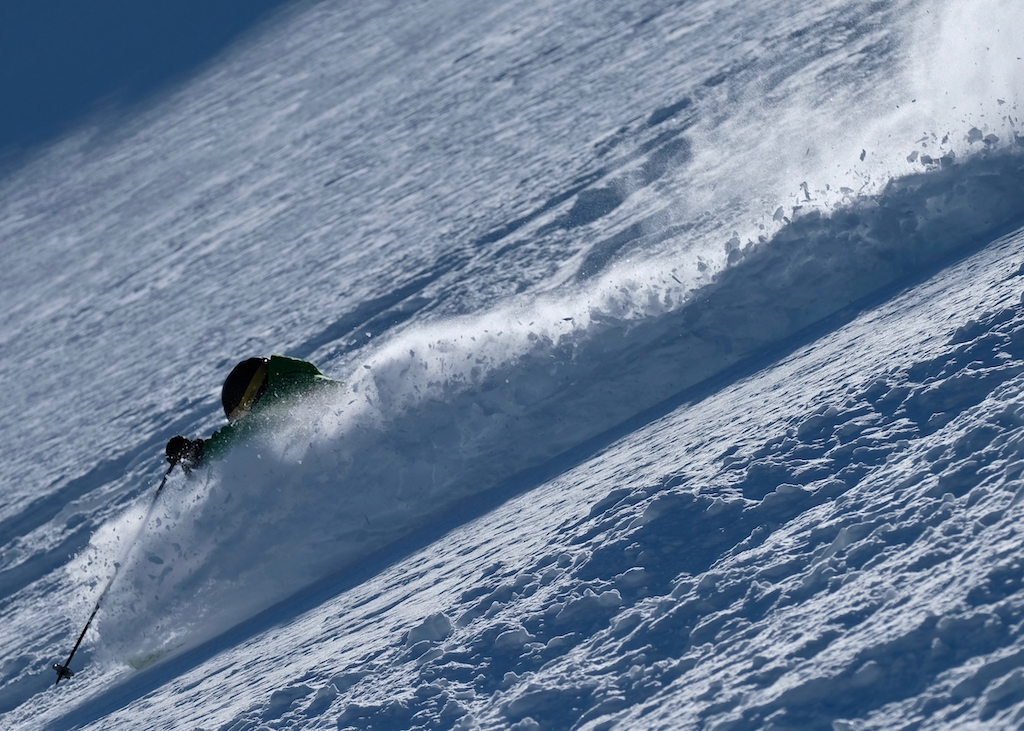 Our two guides are super competent and great skiers; they leave a plume of cold smoke as they blaze a rewarding line through the untracked slopes. The experience is unique—it’s like an ethereal dream sequence when you show up at a snow-laden ski area and it’s all yours. As we drop into the sunny frontside slope to warm up our legs, I hear the swoosh of my ski tips as they penetrate the deep, cold snow blown in from the looming high alpine. 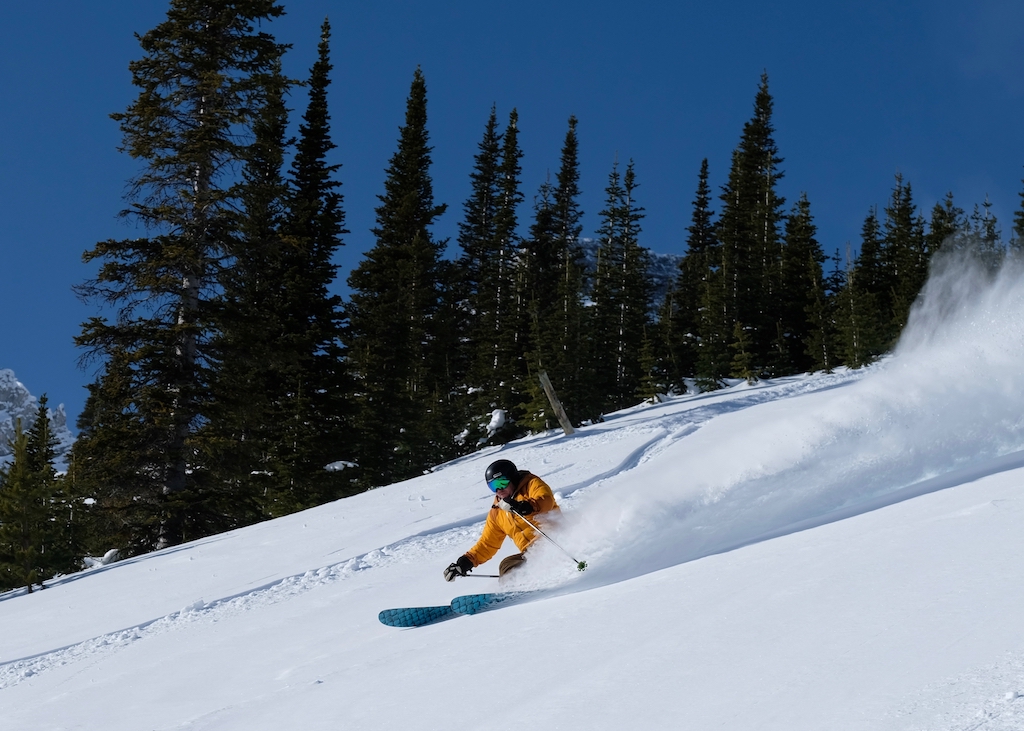 We manage to get 14 runs in during the day. We have lunch after a steeper more challenging off-piste adventure run that tests the group. We are met by Chris, Chev and Thomas Heath, KPOW’s Managing Director and majority owner, with homemade soup, sandwiches, drinks and cookies. We rest our legs and regale in tales of our morning in the snow in the shadow of scenery worthy of the silver screen, apparently near a fight scene location from The Revenant.

Chev and Chris tell me that the Fortress development will have upwards of six lifts and by December 2021, at least two will be running and there are designs on a new day lodge and parking. At least three lift lines are already cut out and the permits have been recently approved by the government. Another unique feature of the new development is ski-in/ski-out accommodation which is limited in the Alberta Rockies. There is a great deal of interest about Fortress in the provincial ski community and the common question is, “when will it open?” KPOW will continue to operate cat skiing four days a week until the ski area fully opens. 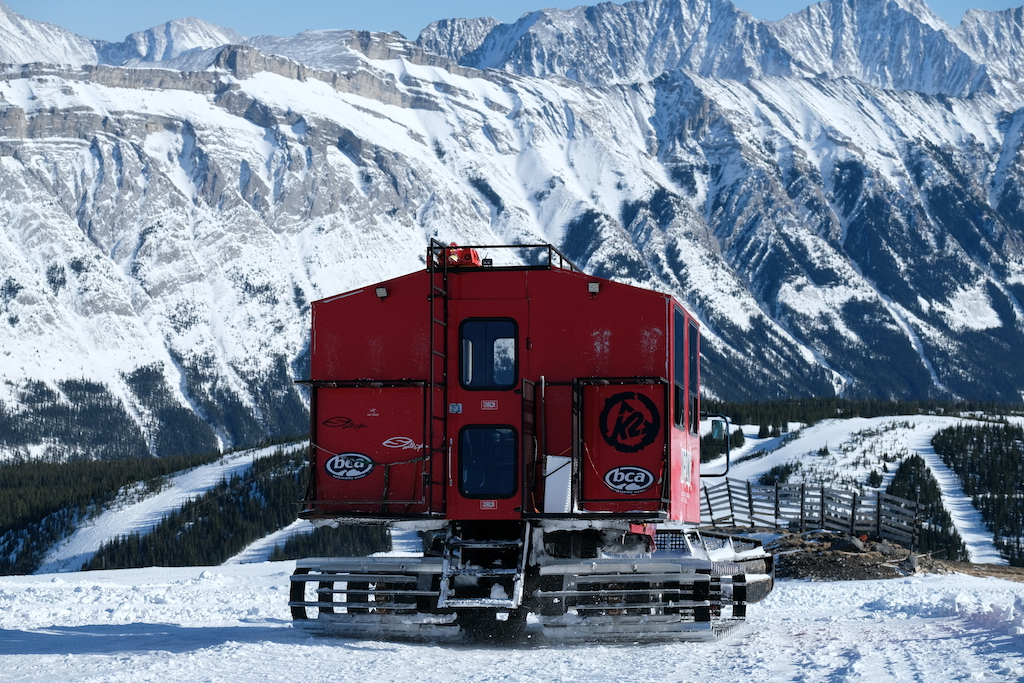 We have lunch after a steeper more challenging off-piste adventure run that tests the group.

Many Western skiers forged their skills and mountain awareness on the wild slopes of Fortress. This place hosts the memories of childhood skiing in a time gone by. As the sun starts to set behind the massive peaks, we find more untracked soft snow below the windswept ridges and derelict equipment of the old far side lift.

Some of our group are happily reporting that their legs are done. A great sense of satisfaction and high fives erupt in the cat before we descend a long, newly cut run on the front face back to the base. Our guides saved us this last run as the proverbial icing on the cake of an incredible snow-filled, sunny day in February.