Jim Faulkner summited the Matterhorn in Switzerland, Chimborazo in Ecuador, Gran Paradiso in Italy. A 13,323-foot mountain here, 20,548-foot there. Some he conquered back-to-back—two years ago he climbed seven peaks in 10 days. But today he’s at the edge of a frozen lake in Haliburton Highlands, gearing up for a trip of decidedly less-dramatic proportions.

We’re just headed out for a little ice climbing. Four strangers and a guide, hacking away at 70-foot frozen waterfalls in the warm sun of early March.

It takes a few hours before I learn of Jim’s mountaineering feats. He’s a modest man, soft-spoken and unassuming. It’s only through repeated questioning that the stories emerge, the track record leaving me scratching my head: “And you live in Barrie?”

Unbelievable as it is, Jim the insurance-broker-cum-mountaineer does indeed live down the road, just like the rest of us. Laura Bruulsema, Bre Robertson and I are merely first-timers on the ice, each of us quietly anxious as we listen to our guide’s instruction.

Peter deMos, owner of Liv Outside Adventures, introduces us to ice tools and crampons in the parking lot. He demonstrates kicking our toes into the ice, to stabilize our weight with the least amount of exertion. Grabbing climbing boots from the van, the realization sets in: Mine are back at the shop. Peter takes the blame and apologizes, but let’s call it a mutual miscommunication. Resigned to my grounded state, I kick myself for leaving my hiking spikes at home. Something tells me the approach may be a bit slick in nothing but Sorels.

We trudge across the lake in our helmets and harnesses, then up the steep, icy bank to the base of the rock—a short hike during which I fall flat on my face or backside countless times, sliding from one switchback down to the last, at times wishing I had an ice axe to self-arrest. Finally at the face, Peter hikes around the waterfall to the ridge, to set up a top rope.

At the base, we watch and encourage, rest and chat. I discover Bre has only recently returned to the world of adventuring. After 25 years of disabling knee problems, three double-knee surgeries have given her a new lease. She immediately re-learned to ride a bike, which led to mountain biking in Utah. Her first day on a stand-up paddleboard encouraged her to try surfing in Nicaragua and Mexico. Able to hike again, she tackled volcanoes in the Azores. But the prospect of ice climbing? Her comfort zone is a universe away.

Confidence shaky, she makes it over the first boulder, scrambling more than climbing. At the sheer vertical pitch, she’s unsure. Stuck. But with every ice-tool swing or nervous step, four of us encourage from below, laughing and cheering as she overcomes one challenge after another. When she reaches the top, our collective scream echoes off the rock.

After 25 years of disabling knee problems, three double-knee surgeries have given her a new lease.

For the remainder of the afternoon, we hike from one route to the next, climbers taking turns, inching to the top and catching the free ride down. Everyone is drenched in sweat, mixed with the constant drip of warming waterfalls. With the sun low and muscles exhausted, we pack up and half-walk, half-slide back to the lake and across to our waiting cars.

Four days later, our world shut down. Oblivious to what lay ahead, none of us knew that adventure would be our last for a very long time. I reached out to see how our little group looked back on that day, when we were just strangers thrown together on the ice.

“There’s something about a shared experience, a bonding that brings you all together—especially when there’s a potential for danger. It’s one of the reasons I do these things: to meet cool people. Everyone has something in them that they bring to the experience,” says Bre. “My legs were rubber and shaking the whole time, but it was so much fun, especially because of the group. The encouragement of strangers really goes a long way.”

Four days later, our world shut down. Oblivious to what lay ahead, none of us knew that adventure would be our last for a very long time.

“It’s the feeling you get when you see the look on someone’s face: They’re tired, scared, going to give up. But when they’re getting support and inspiration, you can see that glow, the look in their eyes. And everyone else is connected to it; we all shared in that victory,” says Jim. “When someone walks up to the base and says there’s no way they can climb 60 feet—and an hour later they’re at the top? What a rush!”

Peter is still guiding, primarily with private groups, but the rest of us are aching to get back out there, meet new people, share new adventures.  And Jim is ever-encouraging to locals who might be on the fence.
“For someone who hasn’t done it before, ice climbing may sound exotic and far-off, like you might need to fly halfway around the world. But you can do it right here in southern Ontario, in a relatively safe way. It’s attainable, affordable, takes very little commitment, and it can be an experience of a lifetime.”

A peak-bagging mountaineer who’s pumped to watch and inspire others, a mother overcoming physical challenges and fears, a climber who made her first day on a waterfall look like her 100th and a guide who kept us all safe and entertained—yup, I’d do it all again in a heartbeat. This time with boots, please.

Excerpted from the Winter Issue of Mountain Life—Blue Mountains. 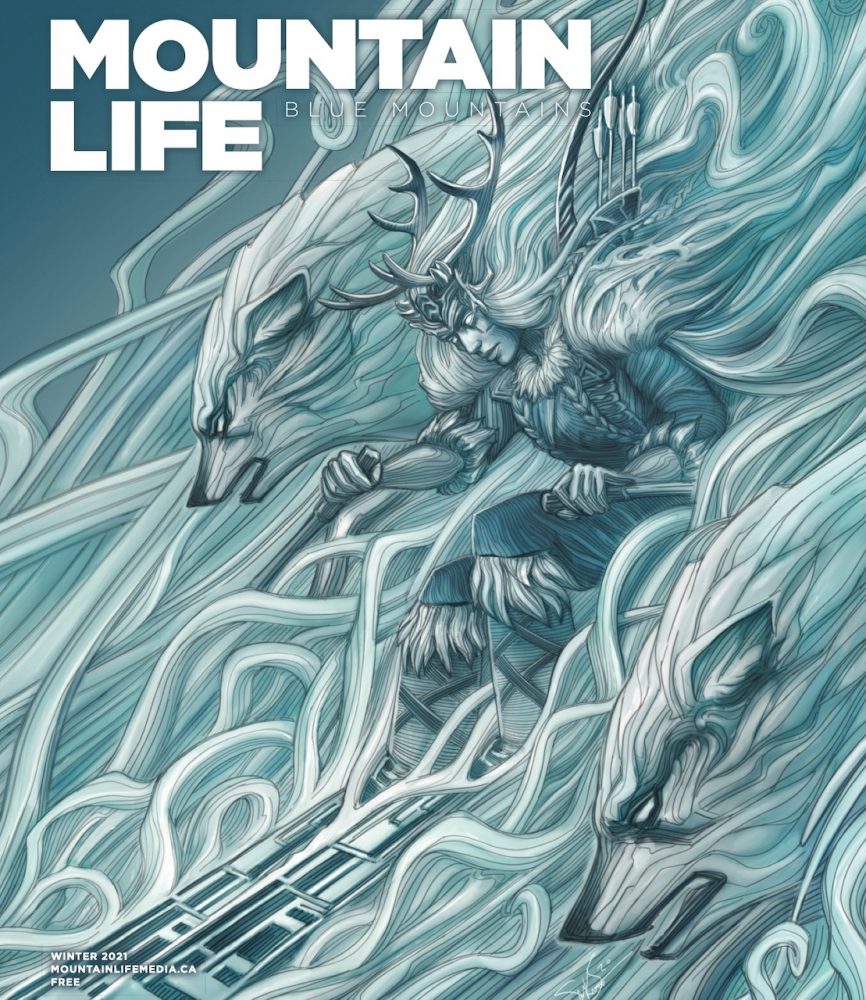