From the earliest days in January, it became blindingly clear that the mountains were in no mood to cooperate. The avalanche forecast held fast in the red-to-black range, making any high mountain travel ill advised to say the least. We weren’t interested in phenomenal mid-mountain tree skiing, our focus was narrowly fixed on the currently inaccessible alpine peaks of Garibaldi Provincial Park. We had big plans, but to be successful, we needed to summit an average of 1.92 peaks each week for the entire calendar year of 2020—an ambitious feat in the best of years. Little did we know that avalanches were just the beginning of what this new decade had in store for us…

The idea was so slick I wondered why no one else had jumped to put it into action: summit 100 peaks in Garibaldi Park to commemorate the park’s 100th birthday. Shawn Campbell, a longtime Whistler ski patroller and Search and Rescue member, had pitched the idea to me in mid-2019 and the ambition level perfectly suited my aspirations. I’d been away on photo assignments and was feeling disconnected from the local mountains. A big, difficult project close to home that could mix work and play sounded ideal, and more importantly, I jumped at the chance to re-engage with my beloved Coast Mountains.

Shawn and I cleared our 2020 schedules as best we could, found some amazing partners in Arc’teryx and Prior, and developed a great working relationship with BC Parks and the BC Parks Foundation. We created spreadsheets detailing peaks, routes, ideal times of year, approaches, traverses, classic descents, and difficult climbs. By mid-December the “Garibaldi 100 Project” was set in motion and we counted down the days to 2020, itching to start officially bagging peaks.

January 1 arrived with few safe options for claiming summits. Our problem wasn’t a lack of early-season snow as much as an abundance. What could be viewed as an underwhelming start to a legitimate mountaineering project, we chose Round Mountain as our first objective—more of a treed ridge-top protuberance than an actual mountain. Nevertheless, as a named summit inside the park boundary, it counted.

Up we went. A horrible mix of sticky slop covered ice and dense windslab provided some technical and humorous challenges. Visibility sat very close to zero, but just being out in the mountains, filling our lungs with fresh air and trudging towards a summit Shawn and I had never stood atop of felt like an accomplishment on a day we would normally have stayed inside. One summit ticked, 99 to go!

It turned out the actual climbing would be the easy part of the Garibaldi 100 Project. Bureaucracy struck first—a week after our first summit, I received an email from BC Parks explaining that due to a technical discrepancy, Garibaldi Provincial Park wouldn’t “officially” be turning 100 until 2027. Apparently, the BC Mountaineering Club and the Alpine Club of Canada worked hard together to designate a protected area of land which is now Garibaldi Park back in 1920. But the area did not receive the official classification of a “Class A” park until 1927. If we wanted to stay consistent with BC Parks, our centenary would have to wait.

What a blow. Just two weeks into the project, our entire concept fell into turmoil. After months of planning and dreaming… now what? Would our sponsors ditch us? Should we take seven years to complete the project? (That seemed too easy, but perhaps more realistic than our original plan of almost two summits per week.) Could we rebrand to the less-catchy-but-slightly-more-achievable “Garibaldi 93 Project”? Should we simply cut the project loose altogether—or did any of this even matter as long as Shawn and I kept our motives true to the original premise? Wasn’t the point just to get out exploring rarely visited areas in the park and climb peaks with our friends?

A Maze of Questions

Amid a maze of questions, and after a few days of thought, we ultimately concluded that the numbers were arbitrary. The original centenary theme wrapped things up into a tidy little package but “tidy” wasn’t integral to our drive and vision—we decided to press on as planned. Despite continued bad weather and some scheduling conflicts, Shawn and I tagged another 11 peaks in the next two months—not quite on pace, but decent considering it was the middle of winter. On the plus side, our whiteout navigation skills were becoming well-honed, as was our ability to ski ice and chunder. Strangely, I felt an almost sadistic enjoyment from the constant windburn and vertigo brought on by straining to see and travel safely in weather that looked like a snowstorm inside a ping pong ball.

When it comes to sadistic, however, 2020 was just getting started. Just as the forecast began to improve and we started gearing up for our first big traverse to clock some serious numbers, a trio of announcements came in quick succession: Whistler Blackcomb—closed, WB backcountry—closed, and then, Garibaldi Park. Apparently the COVID-19 pandemic did not care about our 1.92 peak per week schedule. 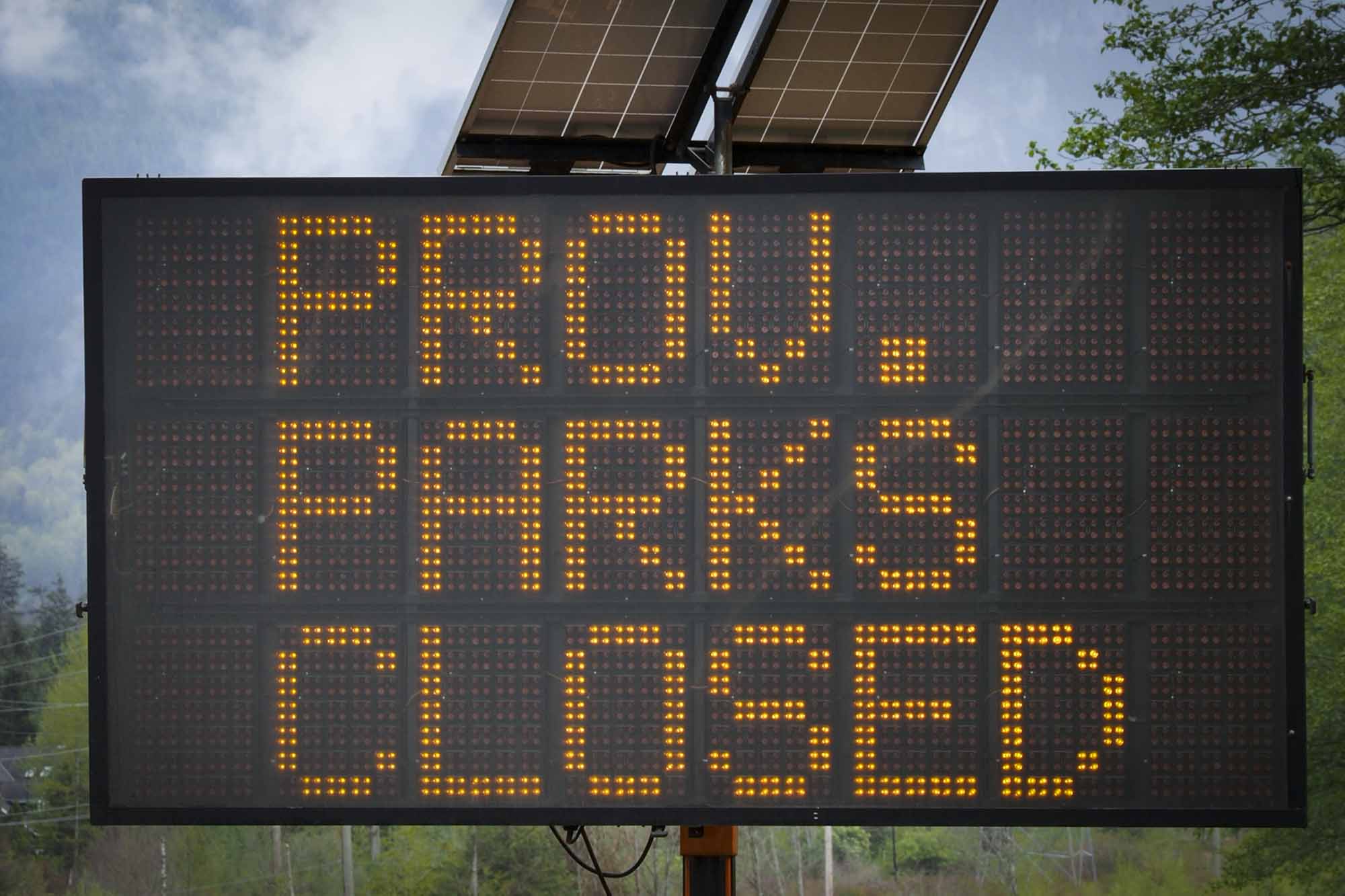 The news crushed us. During this relative imprisonment, Shawn and I grappled to balance social responsibility and our own narrowly focused ambition. We were both very comfortable with our abilities and decision-making skills, but the truth is the mountains are always in charge and it would have been irresponsible to potentially put others at risk while we pursued forbidden peaks on an arbitrary timeline important only to us. Meanwhile, Atwell Peak and Mamquam Mountain shone like snowy sirens with the best weather and snow conditions of 2020 while we watched helplessly from the valley far below.

Bad weather, unstable snow, technical difficulties—these are expected aspects of mountaineering. When you get shut down enough times, you learn to work within these unforgiving parameters and accept that it’s all part of the game. I struggled to apply this philosophy to the pandemic. The stress outlet of playing in the mountains was no longer available at a time when we needed it most. To me, running away into the increasingly familiar peaks of Garibaldi was a safer option than the invisibly infected valley.

We also knew that no one would be crying over our place of privilege. Poor us, having to stay safe and dry at home with the people we cared about most. I battled feelings of guilt and selfishness for mourning something as trivial as a mountaineering project while others were losing so much more. But we were truly invested in our idea and the lockdown left us deflated. A silver lining was that the idle time provided us with deeper insight into what others were going through, allowing us a more compassionate outlook.

As the days became noticeably longer, the prime ski mountaineering months painfully slipped past and my mental landscape shifted daily from acceptance to discouragement and exasperation. Even as the COVID-19 situation improved and many of BC’s parks began to re-open, Garibaldi remained closed. Depressingly powerless to access the park and resume our project, Shawn and I we were forced to re-examine our long-lost original concept, and reconcile our trivial angst.

Finally, and without warning, Garibaldi re-opened in late July. And Shawn and I weren’t ready. Not that we weren’t hungry to get back at it, but life had gone on and we were both off trying to safely salvage our summers. Far from home when the re-opening happened (I was on a media assignment), I felt disoriented by the uncertainty of what our project—now in shambles—would become, and frustrated with our less-than-seamless return. A month after re-opening, we finally connected and headed into the park. True to form, our return to the project remained touch and go.

Of course, things went downhill from there. Both Shawn and I suffered injuries, while smoke from the extreme wildfires in the western US further curtailed our progress. By this point, we had begun laughing at the absurdity of these new hurdles, and how our project had been ill-fated from day one. Somehow though, we claimed five more peaks over the final month of summer—enough to keep the dream on life support.

A Lesson in Fluidity

The Garibaldi 100 Project has been a lesson in fluidity. As the weirdness of 2020 pulled the rug out from under us time and time again, Shawn and I were forced to relinquish our vision, and adapt with each new turn of events. In return, with the burden of time stripped completely from our original idea, our Garibaldi 100 Project garnered a new look and feel. We’ve decided to focus more on aesthetic lines and classic ski descents rather than claiming peaks on a hectic, rigid, by-any-means-necessary timeline. The hope is this will create more powerful and cherished moments on mountains we may never return to—quality and quantity.

As the weirdness of 2020 pulled the rug out from under us time and time again, Shawn and I were forced to relinquish our vision, and adapt with each new turn of events.

As I write these words, we’ve only bagged 17 summits—a far cry from where we’d originally hoped to be at this time. 2020 was a harsh teacher but it’s delivered lessons in patience, humility and resilience. As John Lennon said, “Life is what happens when you’re busy making other plans,” so we’ll keep our tips up, take the hits as they come, and follow this long, strange journey wherever it leads as we claw our way to 100 in one of the greatest backyards we could ever hope to have.

From the current issue of Mountain Life–Coast Mountains.