Chatting on the phone with my sister, she concludes a salt-saturated story about an encounter with sea wolves on a recent Vancouver Island hiking trip with “Carm…”, and long pause. I brace for some kind of life-changing bad news. “I wrote a book,” she says. “And a publisher is interested. Actually, they start printing in a couple of months.”

The news spills out like a confession, there is no subtle way to break such big news. My surprise and shock quickly gives way to being utterly impressed. But also… how dare she write a book and not tell me!
Some people (me, me, me!) dream of writing a book. But few people (also me) actually do it. Holding a copy of On Their Own Terms: True Stories of Trailblazing Women of Vancouver Island with ‘Haley Healey’ in bold font on the cover, I’m in disbelief.

Combining her love of backcountry adventures with a love of local history, my sister takes readers on a journey from the cobblestone streets of Victoria to the dripping rainforest of Clayoquot, from attics, cabins, and sailboat decks, to thick gardens, driftwood-fenced fields, and around open fires to retell the stories of undercelebrated badass women of Vancouver Island’s past.

These ladies lived vastly different lives but were all “gentle in their wildness, discreet in their rebellion, and dauntless in their quest to achieve their goals.” Sounds like someone I know. Before moving to Nanaimo ten years ago, Haley taught high school in the Yukon’s northernmost fly-in settlement. She has guided backcountry canoe trips in northern BC, traveled Nepal solo, and tree planted the steep slopes of the island and BC interior. Now a high school counselor, she supports kids as they blaze their own paths through the world.

“I was inspired by her resilience and how she carved out an existence in an unforgiving place…and how she resisted societal norms of the time.”

While hiking the island’s Hesquiat Peninsula two summers ago, Haley came across the garden of island legend Cougar Annie, a West Coast homesteader, gardener, backcountry entrepreneur, and cougar bounty hunter who lived from 1888 to 1985.

“I was inspired by her resilience and how she carved out an existence in an unforgiving place,” says Haley, “and how she resisted societal norms of the time.” The rainforest has reclaimed the moss-covered dugout canoe that carried Ada Annie Rae-Arthur to her homestead almost 100 years ago, but Haley wants to make sure Cougar Annie’s story—and those of other trailblazing Vancouver Island women—is not forgotten.

Some of the stories may be familiar (like artist Emily Carr or sailboat captain, single-mother, and author of A Curve in Time, Wylie Blanchet) while others may not be, like that of farmer and internment camp survivor Kimiko Murakami or midwife and land claims activist, G’axsta’las. 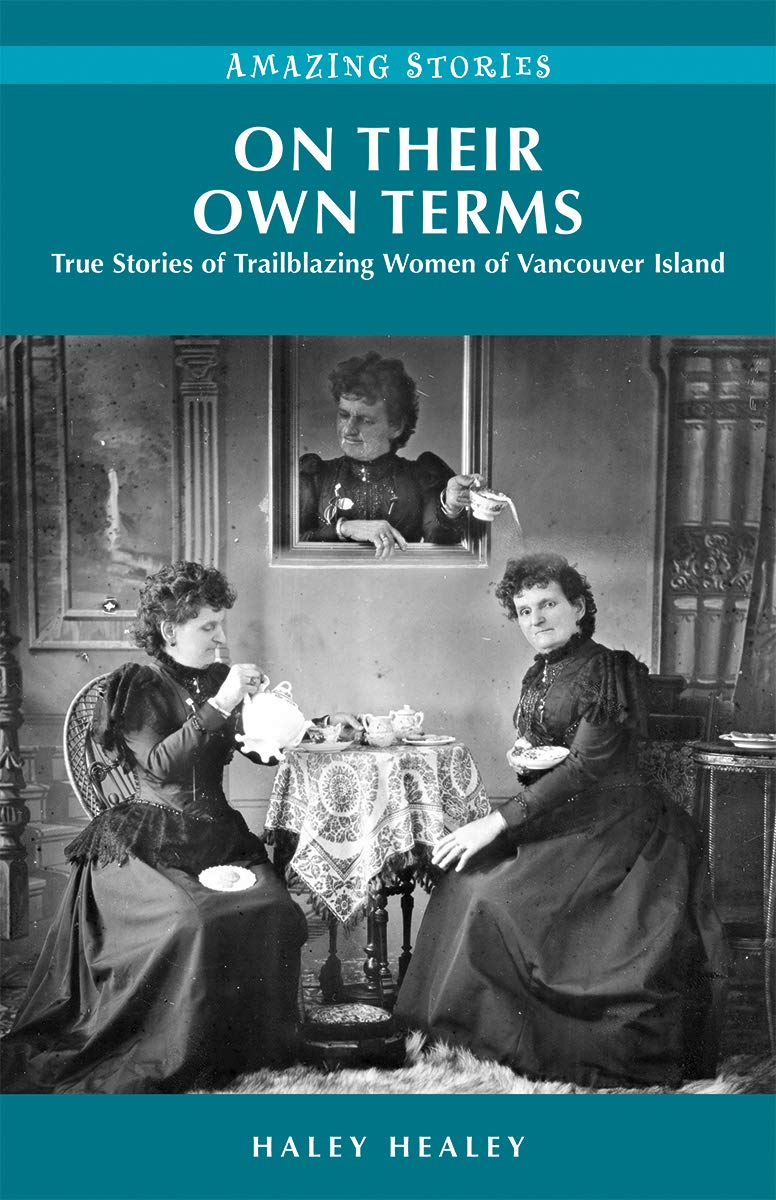 “Women helping women is a common theme in stories of survival, but it’s not always written about in history.” Haley says. Her experience in male-dominated workplaces contributed to the motivation to acknowledge women who were often overshadowed by male counterparts. To paraphrase that famous Gloria Steinem quote, women have always been an equal part of the past, but not an equal part of history.

“I think women are underrepresented in local history because they didn’t do things to get recognition in society. They took different paths and that wasn’t always valued,” says Haley. “These women practiced midwifery, home dentistry, were capable mechanics, and opened the one of the island’s first women’s shelter.” The book touches on themes that weren’t taught in history class such as the First Nations potlatch system, the Indian Act and the Land and Homestead Act, all from a woman’s perspective.
I savoured the 140-page book, reading one chapter a day. Seventeen days later, I wanted more. Haley did too. Sipping beers on her deck, she tells me the sequel, Flourishing and Free: More True Stories of Trailblazing Women of Vancouver Island comes out in Spring 2021.

“Exploration prompted the book, but a lot of people have told me that for them, the book also prompted exploration,” Haley says, explaining that some readers visited the homesteads and settings of the stories of women who delivered babies and delivered seedlings, fished and farmed and flew planes; ladies who brandished guns and pitchforks, and who fought for fishing rights, women’s rights, and against residential schools. On Their Own Terms: True Stories of Trailblazing Women of Vancouver Island plays an important role by putting the stories of these wild women in print. And my sister, it turns out, is one of those wild women herself. Now she’s writing a novel… Um, yeah… how dare she!

On Their Own Terms has been on the BC best sellers list every week since it came out mid-May. Ask your local bookstore (or Armchair Books in Whistler) to contact Heritage House and order you a copy.