Adventurer Bruce Kirkby talks about his new book Blue Sky Kingdom, the ephemeral nature of existence, and why writing about your partner is the hardest thing ever.

One of the key (if often ignored) tenets of contemporary Western philosophy is that “nothin’ lasts forever, even cold November rain,” but most of the best thinking on the impermanence of life and human existence actually comes from the East, especially from the Buddhists of the Himalayas.

The Departure: “I Needed to be Goddamn Present”

So that’s where Bruce Kirkby decided to go. Sitting with his young sons at the breakfast table one cold December morning in Kimberley, BC, Kirkby caught himself mindlessly scrolling through Facebook on his phone “driven by the same urge that draws the beachcomber to the ocean or the gold panner to the river: the eternal hope that somewhere amongst all that crap might lie a treasure.”

“Dad!” Screamed seven-year-old Bodi. “Did you hear a single word I just said?”

And that was all it took. Kirkby and his wife Christine Pitkanen tied up whatever loose ends truly mattered, packed everything a family of four needs to survive into two duffel bags, grabbed the kids (Bodi’s brother Taj was just three years old) and boarded a container ship crossing the Pacific Ocean en route to the Zanskar Valley for three months of living in one of the most isolated Buddhist monasteries in the Himalayas.

“Our journey was never meant to be an escape, nor for that matter was it a search for enlightenment,” Kirkby writes in Blue Sky Kingdom, his recently published book chronicling the experience. “But on that quiet winter morning, as Bodi bawled and Taj sprayed Cheerios across the table, that I saw the years slipping past and our boys growing older. I sensed a million opportunities lost and I recognized the role my lack of attention was playing. And I understood that if there was to be any hope of truly connecting with my eldest son, of deciphering all the opaque messages he left scattered in his wake and bringing to light all the beauty concealed within, I needed to be goddamn present.”

Into the Blue Sky Kingdom: The Interview

Mountain Life: Bruce, a big part of this story, and one of the reasons your family went on this trip, was that your son Bodi had a diagnosis of being on the autism spectrum. And it seems that beyond the value of a really big family adventure and undivided attention from his parents, Bodi really took to the Buddhist life.

Bruce Kirkby: There was this bizarre parallel between Bodi’s autism and Buddhism in that they both kind of didn’t really like distraction. They both just want the truth, to get down to it. And that honesty, I write in the book, is sort of this burning, beautiful honesty that we all wish we could have—but it also requires a distance from your own empathy. And it’s not always a good thing. It’s a burden for Bodi sometimes, but man, I admire him for it. Because I’m the opposite, I’m the mediator.

ML: Just getting to the Zanskar Valley was a hugely epic journey. You canoed from Kimberley to Golden, hopped a train to Vancouver, rode a container ship to China, crossed China and Tibet by rail, hopped a riverboat down the Ganges, another train, a bus into the mountains and then finally, a ten-day trek over the Himalayas. You have a lot of big mountain and expedition experience, but some people would look at that trip with young kids and say you are insane, or worse, dangerous.

Bruce: Yeah but when you’re playing like that, when you have kids in the equation, you’re never that close to the line. We went up to 17,000 feet on the trek out, and I always felt super comfortable. It was never like, “I hope we make it over this pass.” I was always, totally, totally sure. And I was ready to take a day off or a week off or go another way if I ever feel anything other than, “We’re good.”

ML: So you get to the monastery and you’re living with this well-respected lama, Lama Wangyal, and teaching English and math to the novices, some as young as your own kids. And you do that for three months. How did it feel?

Bruce: I’d always wanted to spend more time like that. I always felt super comfortable in that type of periphery environment and the high-water mark of it was more a sum of all the parts—our ability to legitimately feel for that little moment in time like we were part of that community. I know we were outsiders and that we would be leaving—that it would end—but for those few months, it felt like those boys were our boys—we were their teachers, but we were Lama Wangyal’s pupils—and we all belonged. I guess it just felt authentic, and there’s nothing I like more than authenticity.

ML: Were there ever any doubts or low points, or stuff that didn’t make it into the book?

Bruce: There was definitely stuff that got cut from the book, but the only lows were the natural ebbs and flows and human emotions that we all go through. There was nothing predicated by any interaction with the community but there were times when we got tired or frustrated. I had a friend say, “You make Christine sound so timid in the book. She’s always whispering!” And I laughed, because the only time we got to talk to each other privately was when the kids were asleep! But I got his point, some of the things in this book are not my strengths as a writer. It’s easy for me to write about jamming snow stakes in on Mount Waddington and make it compelling, but to try and write about relationships and kids and dialogue, and to make it meaningful and authentic is much more difficult. I’ve heard writing about your partner is the hardest thing ever—whoever said that probably hadn’t had kids yet! It was tough to make a compelling story out of four people sitting in an eight-by-eight foot room for four months.

ML: There’s a ton of historical and cultural stuff in Blue Sky Kingdom. Did you research beforehand or after?

Bruce: The trip was in 2014 and I took a lot of notes. I had just read [Peter Matthiessen’s 1978 non-fiction book] The Snow Leopard and it inspired me. I wanted to create something beautiful, so I took notes on everything. I also did a ton of research after we got home. I wanted to make sure I portrayed Zanskar properly, so I showed it to a number of Tibetans to ensure I was on the right track. I really wanted to hit the mark with this one, I worked on this for six years. At one point, I printed the whole book in five-point font and put it on my floor and just started cutting paragraphs out with scissors and moving them around, like “this idea goes with that idea and this idea goes over there.” You know, you don’t write that many books in your life.

ML: A big part of Buddhism is the idea of impermanence. And that’s the very nature of childhood too. For me, Blue Sky Kingdom really digs into that because you can sense the outside world encroaching on this hidden valley. Like change is just down the road, but they are literally building a road into Zanskar while you are there.

Bruce: It’s weird because there’s a yin and a yang there. The Dalai Lama is always saying, “It’s okay. It’s okay if Tibetan Buddhism ends and you should take from it what’s good for you.” I get that, but just last week they completed a bridge and now the trip from that monastery to the nearest big city takes 25 per cent as long as it used to. It’s the beginning of the end. And they’re okay with that. They are wanting something, but they don’t know the whole deal. And I don’t think it’s our responsibility to tell them what that deal with the devil involves, because we’ve made our own deals with the devil.

The rest of us need to find a way to grow that goodness.

I think about the part in the book when we are in the city and we meet a young computer programmer from Zanskar who talks about his uncle who can sing, and farm, and is an architect who can build—he’s this old man who can do everything life requires. The kid says, “I can’t do any of that, but my uncle is not unique—every old man in every house has been like that for every generation for a thousand years.” That is about to change. But there is so much up there that we could use in our lives—from caring for your kids and elders to the importance of community. There’s a lot of good in that area and, that’s just one source of it, but the rest of us need to find a way to grow that goodness.

ML: I think this book is a good place to start.

Bruce: Thank you. It was a pretty neat moment when the book arrived and I got to actually hold it in my hands. I hadn’t read a word of it, but I knew I had achieved what I wanted. It’s a pretty crazy world right now, but I also think it’s a small world and my hope is this will be one of those books that someone passes on to a friend or tells them about. I just want the book to find its right audience—and whether it’s big or small, that’s just tea leaves.

Ask for Bruce Kirkby’s Blue Sky Kingdom at your local independent bookstore or wherever quality books are sold.

This article is adapted from the new Fall/Winter issue of ML Coast Mountains edition, out now. 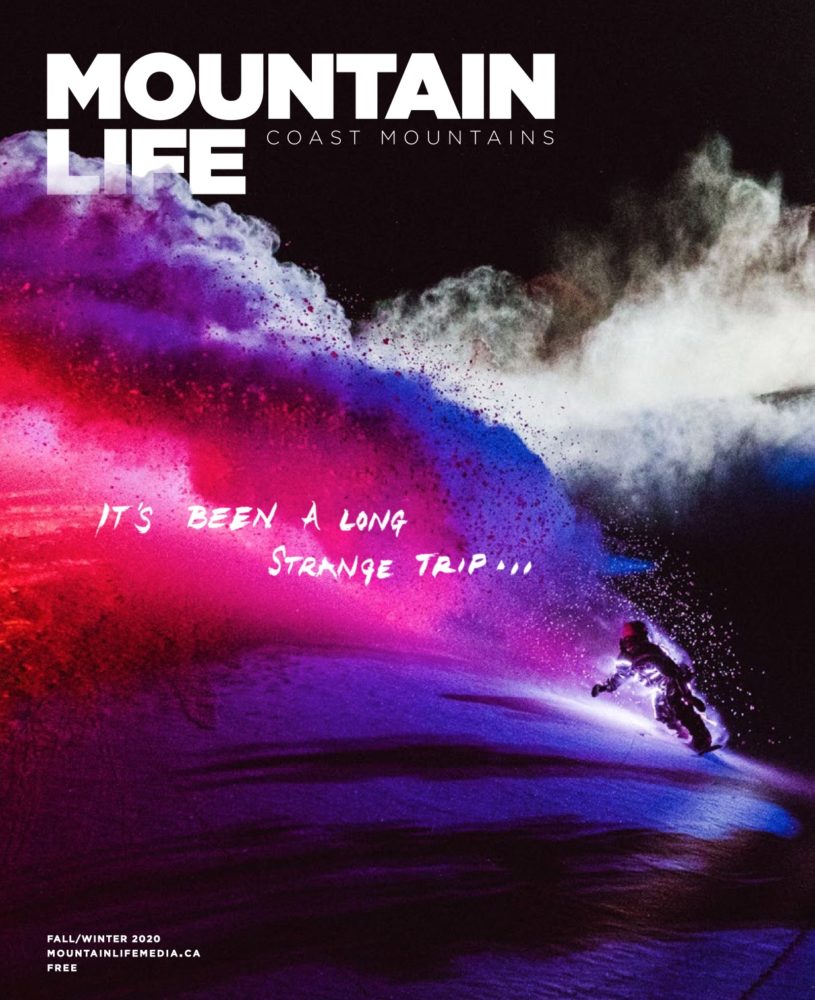