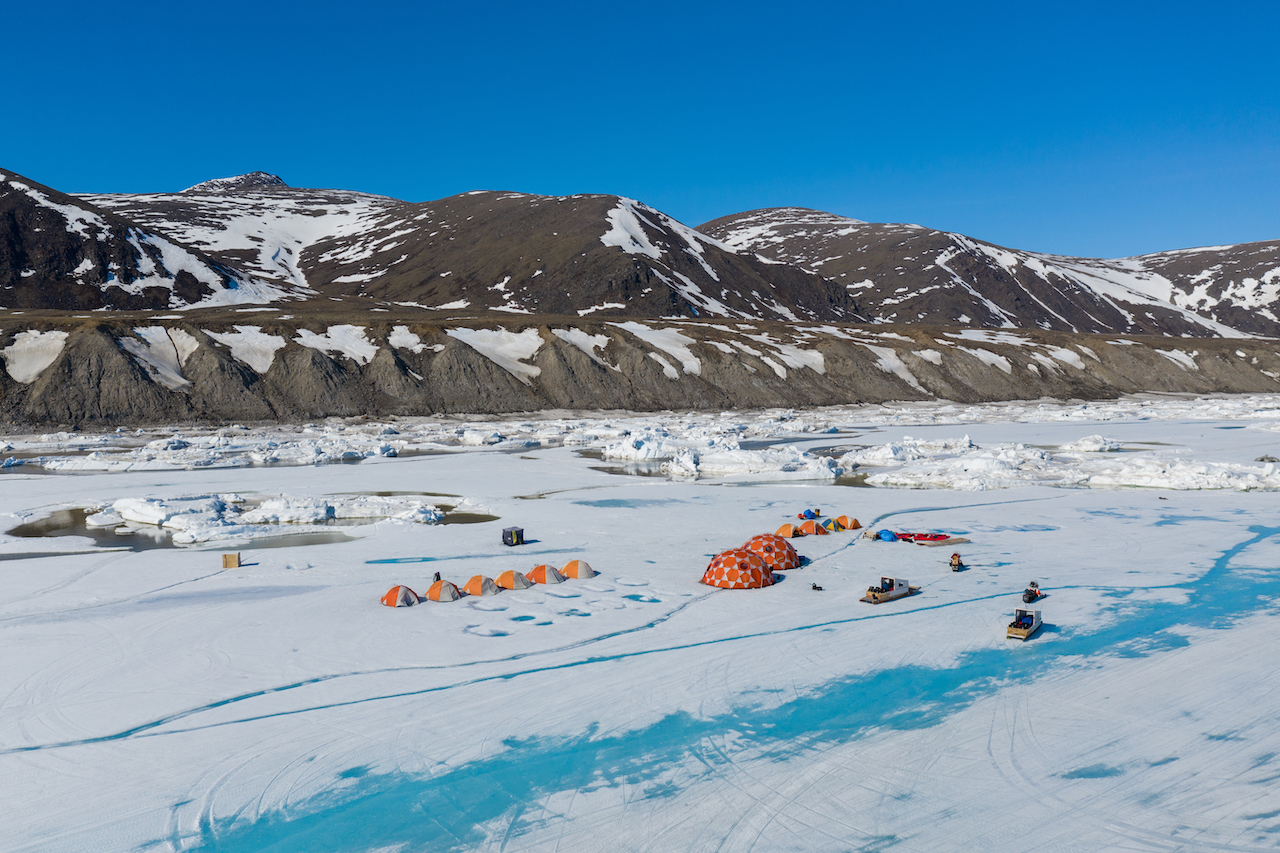 On our final trip to the floe edge, it’s obviously cracking up; the Nunavut landscape is constantly in flux and it’s deteriorating fast. We get as close as is reasonable and see the cracks as they rise and fall with the waves that roll in all the way from Greenland. There’s nothing between us and Greenland but Baffin Bay. We realize that today, the edge isn’t safe.

We travel parallel to the floe edge and then head further “inland.” The inlet we’re on is about 20 kilometres wide and we’re literally in the middle of it. In other words, we’re at least 10km from shore on each side, less than 50 metres away from the edge of the ice as it cracks up for the summer. In six weeks all this ice will be gone. But here, a three-hour snowmobile ride from Pond Inlet, Baffin Island, Nunavut, hanging out on the edge of the ice floe is tradition. The Inuit have been doing it for thousands of years and in fact, doing so ensures their survival in this harsh climate.

There are three of us in the qamutik: myself and two other guests. The qamutik is an ingenious piece of Inuit culture; traditionally pulled by dogs, this massive sled is lashed together with ropes to withstand the harsh reality of ice travel: a bumpy, lumpy, crashy, wet and wild ride. Nowadays these sleds are pulled by snowmobile.

Riding in one is a relaxing yet at times terrifying way to travel. Sitting in the back on the suspension-equipped seats (thank god), it’s easy to drift off to sleep in the cold wind. But when it comes to crossing cracks in the ice, things get nail-bitingly exciting. Crossing metre-wide cracks takes a skilled driver. Thankfully, our Black Feather guide Micheil Hill (who is driving our snowmobile) has been doing this for years.

The Line of Life

As we get closer to the edge, it’s obviously rotting and crumbling. Then we realize we’re on the Greenland side of some of the latest cracks. Between us and the land, cracks are rising and falling in the dynamic sea. We cross over the crack safely, then stop. Our Inuit guide Kaiya Qamaniq (who I trust implicitly even though he’s only 26) hops off his sled with his rebar harpoon. He stabs at the ice repeatedly, then states what we already know.

No shit, I say to myself.

But then Micheil states the even more obvious.

The other two guests and I look at each other incredulously, anxious to get the hell out of here. And then we make a beeline back to camp. Which is also on the ice.

To be fair, I may be overly squeamish when it comes to being on ice; back home in Ontario, you simply don’t go near it when it’s breaking up in the spring. It’s just a bad idea. But as the guides assure us, the ice is two metres thick here. It takes two inches of ice to hold a human, so everyone else seems to roam around here without concern, while everything my mother warned me about thin ice, comes welling up within. I walk around gingerly, constantly in fear I’ll break through. But I never do. No one does.

For the Inuit, the edge of the ice is the line of life. It literally provides life. As the sun penetrates the thinning ice, algae and phytoplankton begin to grow in and on the ice. This attracts krill, which attracts fish, which attract narwhals, belugas, seals, walrus and bowhead whales. And for the Inuit these animals represent life. They hunt from the floe edge every spring. Whatever they manage to harvest will help the community survive throughout the year.

For the Inuit, the edge of the ice is the line of life.

I’m on a six-night tour with Black Feather. This is one of the best places to see narwhal and people come from around the globe to glimpse this mythical beast. On sunny, calm days we spend hours in camp chairs a few metres from the edge, watching the sea, hoping for a small sighting.

The floe edge is about a 15-minute commute from our campsite. We’re camped on the ice, but we’re on much more stable, “land-fast” ice. In simple terms, it’s ice that is attached to the land. Camp is about 100m from the rising land of Bylot Island, home of Sirmilik National Park (Nunavut’s second-largest). With six Mountain Hardwear Trango 4 tents, and two Space Station domes, camp is pretty comfortable.

As we get closer to the edge, it’s obviously rotting and crumbling. Then we realize we’re on the Greenland side of some of the latest cracks.

Each Trango is set on a sheet of plywood and has a cot with a Therm-a-Rest, and another Therm-a-Rest beside it. You can put all your stuff on the Therm-a-Rest and sleep on the cot. Black Feather provides a sleeping bag rated to -30C and overall, it’s pretty comfortable. The ice doesn’t creak or move during the night and as long as you keep your stuff dry, you’ll stay warm. Just make sure to pee before you go to bed. The optically pleasing Space Stations make up the cook tent and the common room. We spend a lot of time in there, eating delicious food, learning about narwhals and polar bears from the amazingly qualified guides. Temperatures vary between -10C to 13C during the week.

At this time of year, the sun literally never goes down. You can watch it doing circles in the sky. Which means a flashlight isn’t on the packing list.

The guests here are focused on seeing a narwhal. That’s why they’re here. They don’t want to go cross country skiing, or kayaking (both options on this trip), they simply want to see and get photos of a narwhal. On our first day we see three. None of them have the tell-tale tusks, but they are certainly narwhal. We don’t see any more.

Nunavut: A Wilderness Every Canadian Should Experience

But it was on day five the trip was saved; scanning the icy horizon, our guide spotted something moving. He wasn’t sure, but as we all spun our tripods to the north we confirmed what he suspected: a polar bear. It traipsed along lazily, obviously confident of its spot on the food chain. We lost it for a couple minutes after it jumped in the water, but then saw it again; it was swimming our way. And without a doubt the next 15 minutes were the highlight of the trip. The massive male swam directly in front of us, climbed up onto an iceberg just to the east and had a good look and sniff at us. It was probably 200 metres away. Then it jumped back in the water, swam back towards the ice on the other side of us, before climbing back onto the ice and walking off into the fog. We followed it briefly before realizing we couldn’t see far enough for it to be safe.

Surrounded by mountains that rise up to 600 metres from the sea, this barren slice of the planet is as beautiful as it is harsh. The Inuit, who speak sparely and efficiently, have carved out an existence in an incredibly difficult place to survive. We all look to them for guidance and knowledge about the Nunavut landscape.

Heading back to camp after our final disconcerting visit to the floe edge, I look around and marvel at this incredible place. It took days to get here and with flight delays and weather windows it will take even longer to get home. But it’s worth it. It’s a shame it’s so difficult to get to; every Canadian should experience the vast wilderness of the Canadian Arctic. On the other hand, it is the remoteness of this expedition that makes it so fulfilling. That one glimpse of a polar bear, the magical moment with the unicorn of the sea, and getting to know some Inuit makes me feel more Canadian than ever before.

Why Is Will Gadd Trying To Climb Underneath The Greenland Ice Sheet?