On a Saturday in July last year, Dustin Johnston-Jewell and Elan Marko awoke at 3:00 a.m. The early wake-up call at a friend’s home in Kimberley was the beginning of what the climbers dubbed “The Eager Beaver Challenge”—a possibly foolhardy scheme requiring each to climb all the sport routes (5.9+ and under) at the four major Beaver Valley crags, with no outside support, in less than 24 hours. Dustin and Elan cycled between Old Baldy (also known as Kimberley Rock), Metcalfe Rock, The Swamp and Devil’s Glen and then jogged to each cliff base, carrying all their equipment and supplies. Following multi-pitch rules, the first climber led while the second followed and cleaned the route on top-rope. 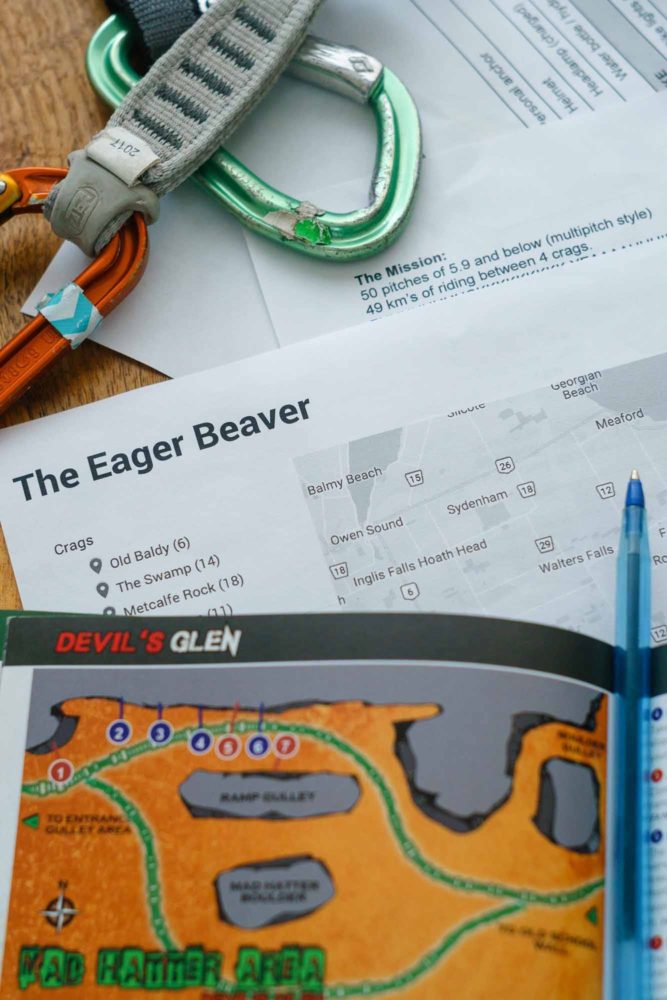 Just after 4:00 a.m. the duo began jogging with headlamps from the Old Baldy parking lot (the start and finish line) to the cliff base. By 5:00 a.m. I showed up just in time to shoot their last route on Old Baldy. Then they ran back to the parking lot to load their bikes.

By 6:15 a.m. Dustin and Elan arrived in the Metcalfe Rock parking lot and locked their bikes to the signage board. Of all the Beaver Valley crags, Metcalfe has the highest concentration of sub-5.10 climbs, so beating the weekend crowd was a priority. Despite both Dustin and Elan climbing regularly in the Beaver Valley, neither had visited Metcalfe in a while; some wayfinding and new route attempts slowed them down a little. Luckily, the guiding companies and their clients started hiking in just as the two were packing up. Around 9:30 a.m. they made a quick pit stop at a spring to wash off the morning sweat and top up water bottles before they jogged back to their bikes.

The Swamp was next—a long crag with the longest approach of the day. The two arrived at the Kolapore Uplands parking lot just after 10 a.m. Though it was a Saturday at the height of climbing season, other climbers were supportive of the Eager Beaver Challenge and allowed the duo to climb first. With just four routes left at The Swamp, the weather suddenly turned to rain. The rain lasted just long enough for the guys to refuel while huddling under a tree. Once the rain stopped, they got back to work. By 1:30 p.m., they were jogging out.

So far, the guys were ahead of schedule but knew the majority of the cycling was still to come. A 26-km ride took them to Devil’s Glen where they quickly climbed the remaining 11 routes. By 6:00 p.m. they refilled their bottles in the nearby spring and started the final 35-km ride back to Old Baldy.

At 7:00 p.m., they arrived at the Old Baldy parking lot where they began their challenge more than 15 hours earlier. All in all the two biked almost 80 kilometres, climbed 50 pitches each and ran everything in between. While packing up Dustin said, “There’s definitely an opportunity to improve the time. It’d be pretty awesome to see someone else come out and give it a go.” Challenge accepted? —ML

Will Tam (@willtam85) is a Toronto-based climber and photographer.