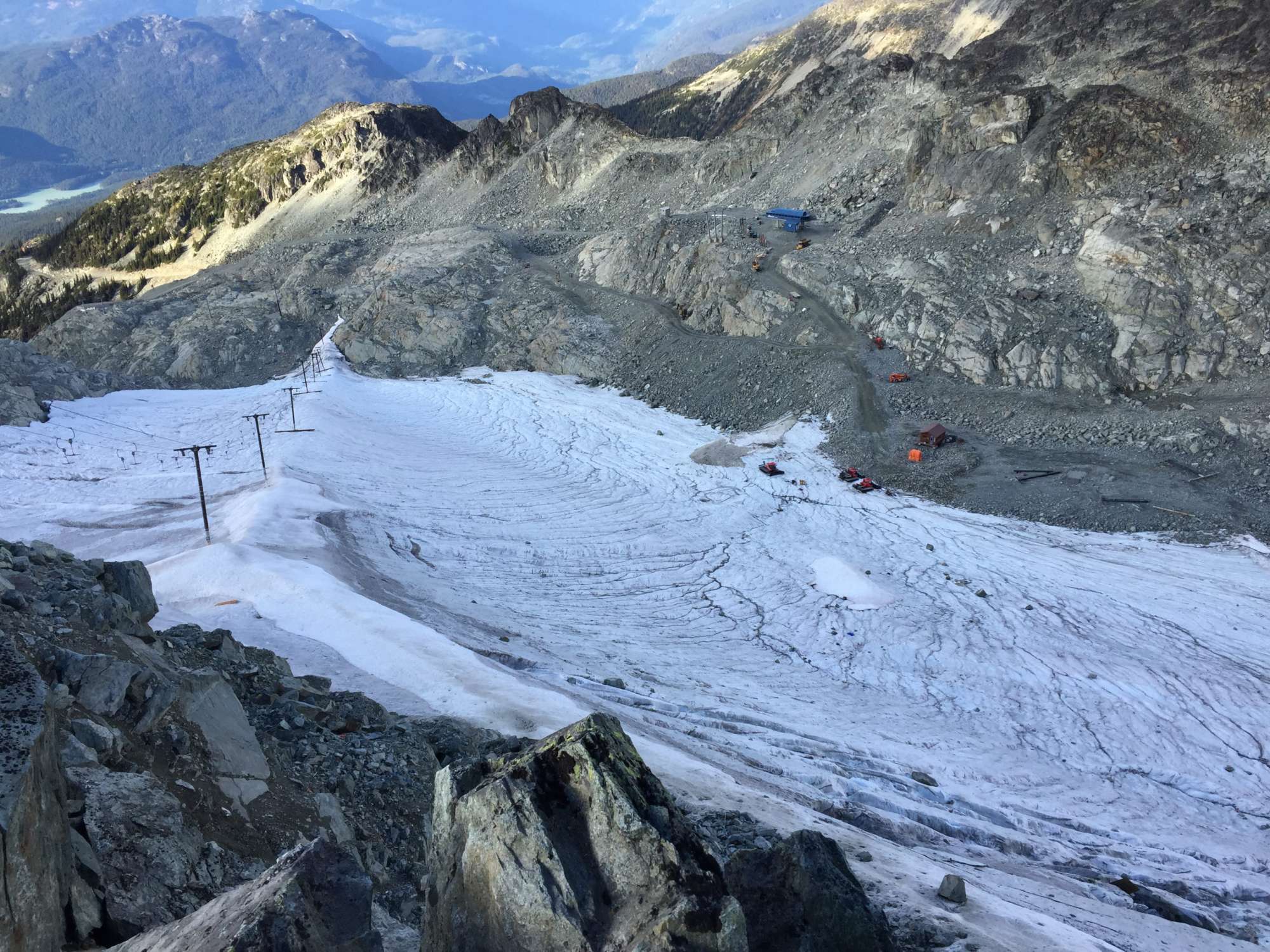 Firsts and Lasts: Memories From The Horstman T-Bar

A few months ago, a pillar in the foundation of ski and snowboard history was knocked down. For decades, the Horstman T-Bar represented a breeding ground for progression, a melting pot of ski and snowboard culture, and a lift that made countless memories for skiers and riders from all over the world.

When it was dismantled,  it wasn’t just a hit to the ski and snowboard world, but also a sign of the devastation we’ve inflicted upon our natural world. The T-Bar was removed because the glacier underneath that provided decades of summer riding, shrank to the point that it was no longer possible to run the lift.

While many locals had seen it coming for years, the pain of seeing the glacier receded was enough of a reminder of the stark anthropogenic effects of climate change. The t-bar coming out was nothing more than a very bad tasting cherry on top of it all.

To commemorate the end of the t-bar, we asked glacier stalwarts like Mike Douglas, Brett Tippie, DCP, and Marie France-Roy their first and last memories some of the good times that went down riding the infamous Horstman T-Bar.

“The first time I saw the Horstman T-bar was in the summer of 1988. Although I had been to Blackcomb once before, it was on a trip hitchhiking down after a summer of treeplanting to ride the glacier in the summer that I first rode the t-bar. There were lanes to go fast on, slushy bumps to smash on my Sims Kidwell, and I even saw my hero Craig Kelly practising in the halfpipe. I couch-surfed and spent nearly all my wages on lift tickets riding my face off, and I mean that literally because I didn’t have nearly enough sunscreen!

When I was getting very low on money, I bought a bunch of cans of beans and a final lift ticket for the trip.

After shredding for the day and lapping the t-bar as many times as my 20 year old legs would let me I walked past the line-up for the bus at the bottom of the 7th Heaven chairlift, that took you back to the Solar Coaster lift and ultimately the village, and instead descended into the woods several hundred feet and set up camp with my tent for NEARLY A WEEK OF FREE SHREDDING!

I could barely find a flat, let alone a soft place to sleep.  Although I kept my mostly canned food suspended by a rope in a tree hundreds of feet away, I could hear bears sniffing and snuffling around my tent at night literally an arm’s reach away on the other side of the nylon barrier. In the mornings, I would meld in with the skiers and boarders getting off the bus and get on the chairlift to go up and ride the t-bar on the Horstman Glacier all day. I eventually ran out of water after 4 days and Doug Lungren, Dano Pendygrasse and Steve Edmondson would bring me fresh water a few times. Doug still laughs about me crawling out of the woods croaking “Water please!”

I met so many cool people on that t-bar and got to ride with pro’s, dirtbags, legends…and pro dirtbag legends. I will never forget that trip and although it seemed a little hardcore, it was the only logical thing to do to keep riding on a very low budget.”

“My first memory was in late 80’s. There were no rocks showing and it was Craig Kelly’s camp. I was a grom and it was a dream to be able to ride in the summer… all the pros and vibe up there was so amazing.”

“The first time I went up the horstman t-bar, I must’ve been 12 years old. I had the t-bar on my mid-back because I was so short. It was my first year doing summer camp at SMS, which is now Momentum. I still can picture all the pro skiers ( Tanner Hall, Philou Poirier, JP Auclair, Mike Douglas, Pep Fujas and many more…) I was looking up to at the time in the T-bar line up. It was a true inspiration and a dream come true. “

“Through the 1990s and early 2000s I was averaging about 40 days a summer up there and started to notice the effects of climate change with my own eyes – it’s what created my motivation to try and do something about it. It’s sad for me to see that lift come out. So much of what made me the skier I am came from training on that glacier. We (The NCAF) used that lift to access the jumps where we landed tricks for the first time in 1998. It was all Hawaiian shirts and yellow Teneighty’s flying in the wind”

“Last summer was my first time up there in a few years and I was pretty bummed that I couldn’t strap in and shred right from the top.  It wasn’t how I remembered it— the glacier ice was showing right beside the t-bar and it didn’t look anything like the last time I rode up there.”

“My second year at Camp of Champs, I did a work-trade as a lunch girl. I vividly remember dragging up the tupperwares and water jugs at the end of the day. That year both of the big hips were up, the jump line, and the mini-pipe. Possibly my favorite year up there. The lunch gig meant you were up there every day, start-to-finish; meaning you would shred rain or shine every day. Nostalgia thinking back of the summers of COC.”

“The first time I went to Whistler was the summer of 1996. I was only 15 yrs old and I was so stoked to go ride the glacier and the infamous wind lip. I spent 2 months there, got a job as a pipe digger for the public park with both my best friends. Well, I actually never got the job, they did but I worked with them for free and helped and got early access.

We had to rake and salt the pipe every morning, but we could ride it for 2 hours before anyone else showed up. And believe me we did. Riding halfpipe in the summer was what it was all about for me and my friends and back then. There was at least 4 different pipes. We would work at the public pipe, ride it, rake it and salt it again, then we would go and try poaching Camp of Champion but we had to run away from the camp directors, haha.

That’s when I fell in love with Whistler. Not because I worked at the market place’s KFC, but because we got to ride all morning , ride bikes to lost lake every afternoon and party every night!

There was a lot of snow back then… they even had a road gap going to the public half pipes.  One time on my way out, I hiked to the top of Saudan Couloir to ride down that day.  Just as  I got to the top, Craig Kelly was strapping in. My friend I got to talk to him and the 3 of us rode down together… it was an incredible beginning to an amazing journey!”

“I drove to Whistler from Quebec and was living in my 84 Jetta and was working 7 days a week housekeeping at the Glacier Lodge. I needed to save money for school so I only went up one day all summer because I was so broke. I bought one ticket and these pictures were taken that day by my friend Miguel Masse. That day on the Glacier is all it took to convince me to move back to Whistler as soon as I was done school, which I did two years later… I got so sunburnt that day ! So worth it :)”

“The very last time I have a great memory of the Horstman T-bar was ripping some winter laps with my wife Sarah and our oldest daughter Jessamy, who was not even 10 at the time, beside the T-bar.  I was out front and going fast carving clean GS turns about 2/3’s of the way down the T-bar when I thought I would pull up and wait for my family. As I started to slow down my daughter blasted right by me hauling ass with her jacket absolutely flapping in the wind and she got into a low Super-G style semi tuck and continued down the slope ripping! My jaw hit the ground, and I almost cried with pride. I had no idea she was getting that fast and would drop me like a bad habit to the bottom of the T-bar…or that I would have a little family that enjoyed the magic of shredding that magical place as much as me…30 years after seeing it for the first time!”

“I was helping with Momentum Camp with their photo workshop and we spent a beautiful evening up on glacier for the sunset shoot. Miss those evening downloads. I remember on the download from camp that evening wondering how long this glacier summer riding will last as the visual evidence of our glacier year after year was so apparent.”

“This isn’t my very last memory, but it definitely stands out. A few summers ago they had a few very nice park jump and I got to session the jump with some of the dudes from the national team: Darcy Sharpe, Mickey Ciccarelli. and more … It was so much fun to go fast, catch a good amount of airtime and feel young again. I have such great memories of riding on the Glacier and hanging in the rocks—I love summer riding. I just wish they still made a sweet halfpipe for the summer sessions”

“17 years later, I’m the one coaching the 12 year old’s and they have the T-bar mid back. Lots of good memories on the Horstman T-bar and its sad to see that the glacier has receded so much that the its not able to run anymore.”

“I wish I could saw the lift coming out came as a surprise but I didn’t. There are many more sad stories like this to come.”

“The last year up at camp the glacier was most definitely receding and snowfall was minimal. The snake-run seemed to be the golden-egg of the lap. I was coaching the last few days I was up there & was helping a rider up the t-bar for their maiden voyage of up the Horstman. Classic toe-edge-catch by the kid and I took the edge to my shin. The sensation of blood leaking from the split shin was immediate, but I couldn’t come to react or freak the kid out. A few more valiant tries & the camper made it to the top and I made my way to the hospital for stitches. That glacier gave me a handful of injuries, but holy mackerel I miss the hot summer days of Camp of Champs, hiking your favourite feature and hanging with the homies; unloading back down to the village, and heading straight to the lake.”

“My last memory on the Tbar was my last time on the Glacier which was two summers ago I believe. I just couldn’t believe all the blue ice covered in mud, something I had never seen when I was coaching at COC less than 10 years earlier.

There is no doubt that we are losing our glaciers and that our planet is changing. And with the amount of human activity going on in the world, I can’t believe that some still try to deny we have any effects on our beautiful and bountiful playgrounds. So as people who gain so much from nature, for our fun, fresh air, food and also economic and employment opportunities, this is a reminder that we must keep standing up to protect it.”

Want to see this