In this excerpt from the Shred Girls book series, girls’ downhill MTB is front and centre. 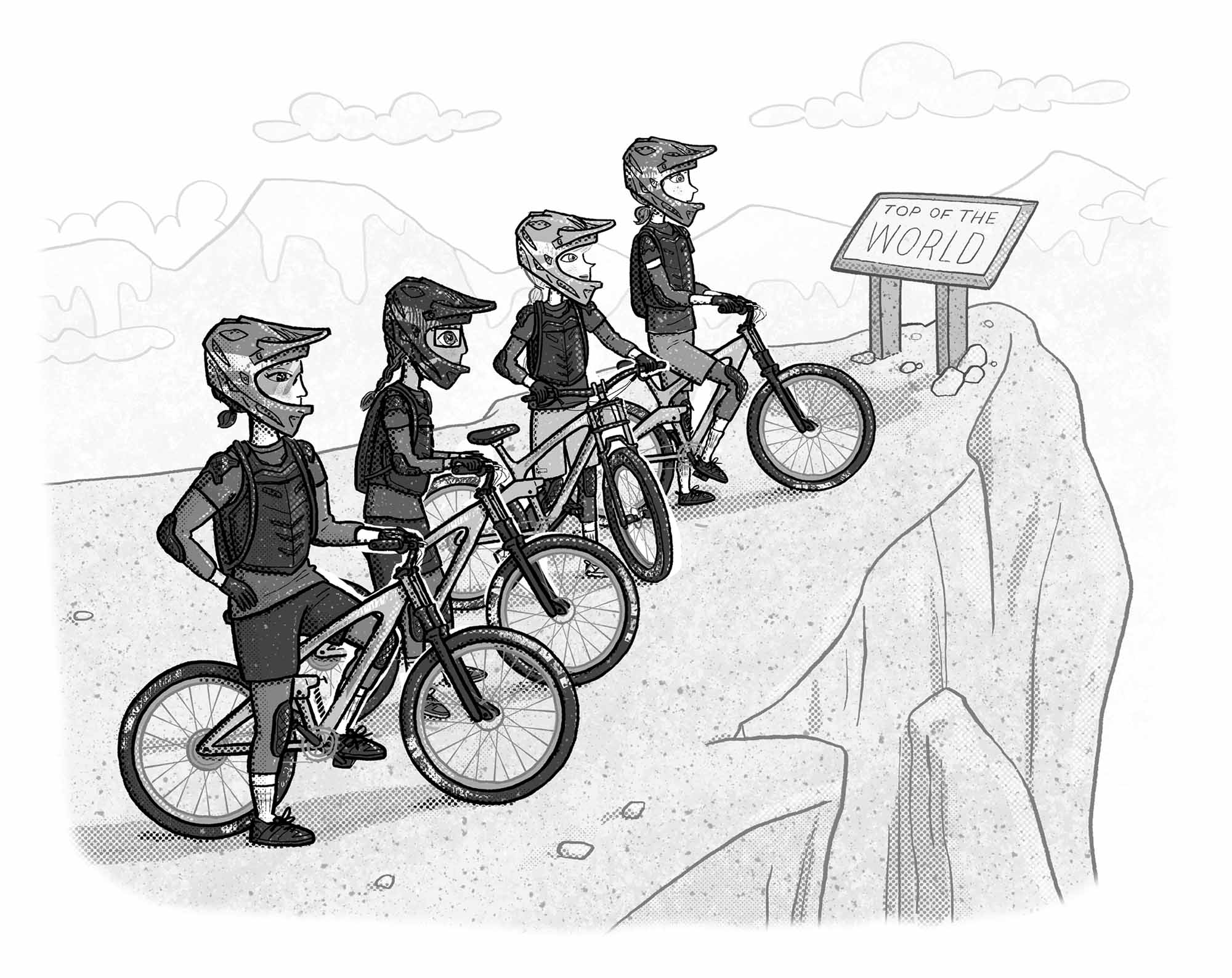 The Shred Girls series was born out of trying to solve a problem: Statistics show that the participation rate for girls in sport drops as they reach their teenage years. How can we fix that? Traditional sports programming works for some girls, but it certainly didn’t work for me. I was a bookworm who refused to run a mile in gym class. What I was willing to do, however, was act as an amateur detective because I loved Nancy Drew mysteries. What if instead of sleuthing, I could write a series about a group of young girls who found their way into riding bikes as a team? As one mom to a young cyclist told me, it is easy for kids—especially girls—to be pigeon-holed as either an athlete or a bookworm, or, to get a little Breakfast Club on the topic, a jock or a princess. My goal is to make sure that girls understand that to be a human is to have many dimensions. –Molly Hurford

When we get to the mountain, Phoebe leads us to the rental building. We hop in line, and it turns out that it’s like an assembly line: build your own downhill mountain biker.

First we get big kneepads that cover from our knees to our shins. Then elbow pads. Then a chest plate. Next, the massive full-face helmet that looks like what a dirt biker would wear. And finally, the bike, which is in fact gigantic.

We’re giggling like crazy as we drag ourselves and the bikes outside. We’ve pretty much doubled in size since we went in!

“It’s. So. Heavy,” Jen groans. “And I look ridiculous.” She kind of does, with her kneepads bunching up around her thighs and her elbows almost stuck out at ninety-degree angles because she’s so packed down with the padding. It’s funny to see her so out of her element, and while Lindsay and I look equally silly, I think we’re pulling it off a bit better because neither of us cares about how it makes us look. 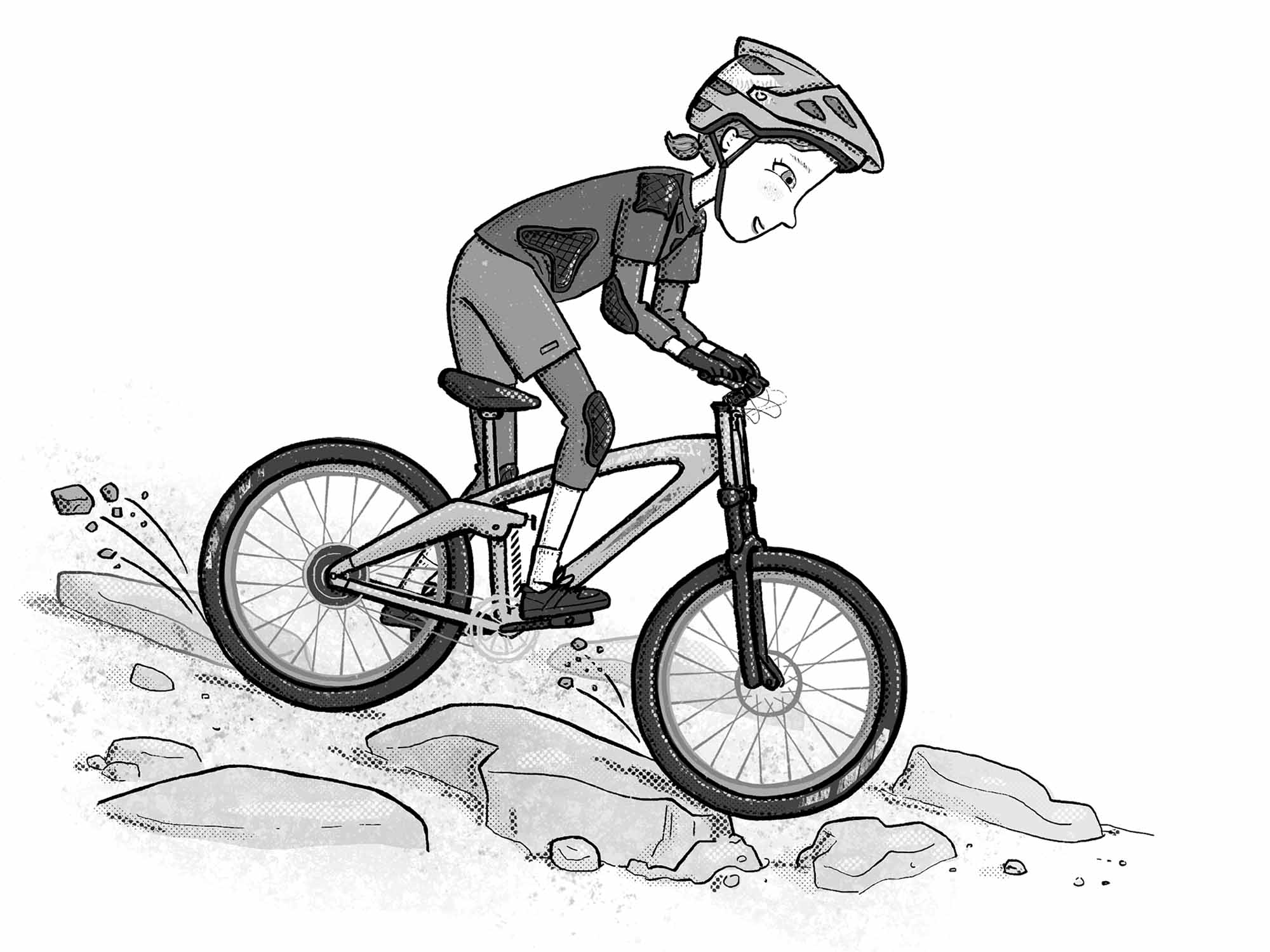 “Trust me, you’ll feel a lot more confident wearing this stuff when you’re going downhill. And look at that guy,” Phoebe says, pointing at a dude about her age walking by wearing pretty much the same gear. “I know him. He’s a pro racer. He’s been doing this for years, and that’s what he’s wearing for practice.”

Knowing that it’s not just us wearing sumo-wrestler levels of padding makes me feel better, like at least Phoebe doesn’t think we’re huge babies who are going to immediately crash. Which may be the case, but I’m glad that we don’t stand out in the crowd.

We roll our bikes over to the lift, and Phoebe starts explaining how the chairlift works. We’re at a ski hill, but in the summer it’s a downhill park, which means that instead of chairlifts for skiers, they’re for cyclists now. When it’s our turn, we all nervously walk toward the lift like we’re walking the plank. I try to keep my heart from racing as the chair starts moving closer and the bike rack glides into position. “Have fun, girls,” Phoebe says, waving goodbye to us even though she’ll follow on the next chair. 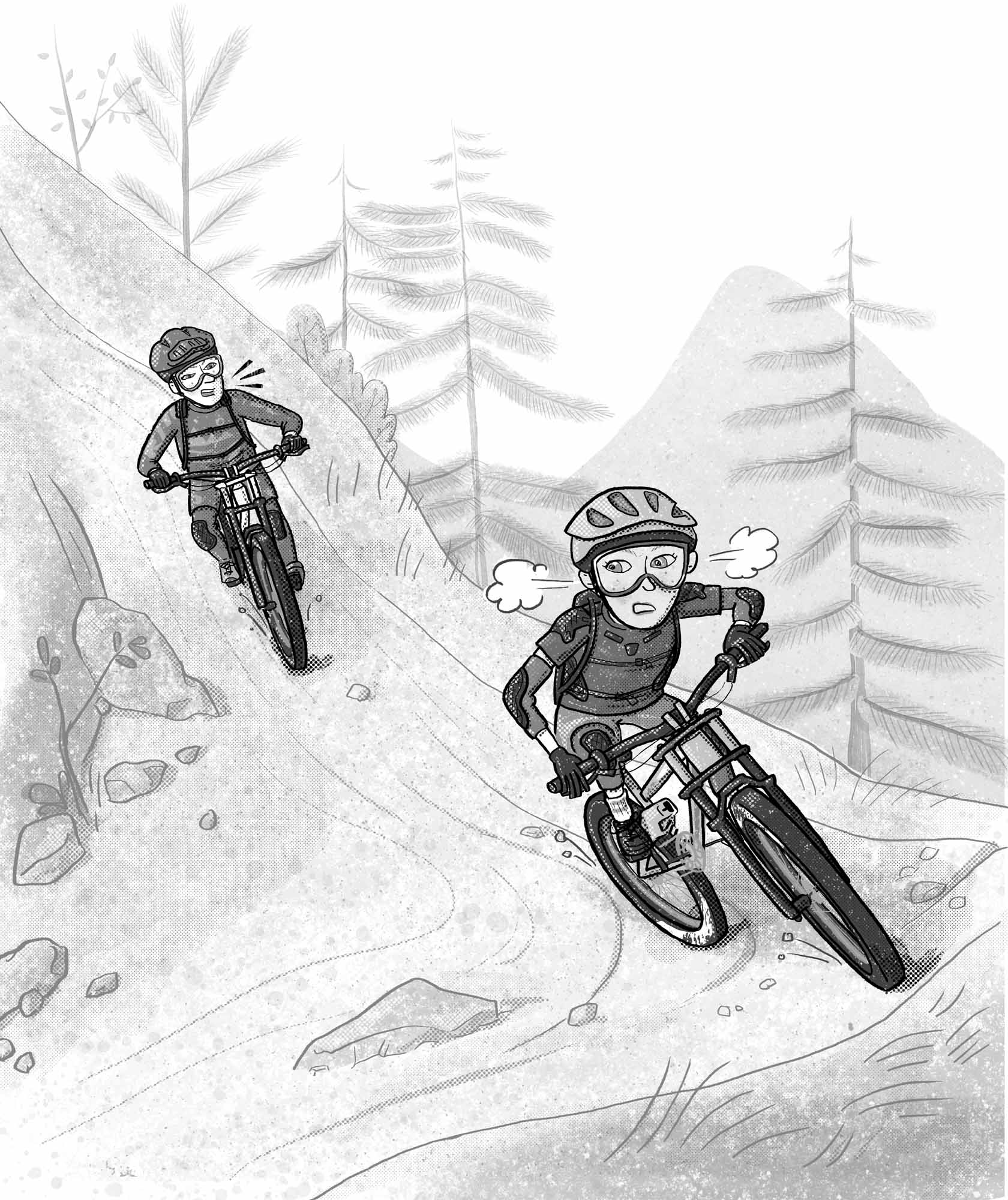 Then, whoosh! We’re heading up the mountain, and with the trees under us and no snow covering the ground, it looks even more intense than it does when you’re going up the ski lift in the winter. The ground looks farther away, the movement feels faster, and it’s actually a lot scarier. Under us, I occasionally catch glimpses of cyclists through the trees, buzzing around corners, going off jumps, and hitting corners so fast that they leave a dust trail behind them, like they would if they were riding motorcycles that puffed smoke.

And right as I’m starting to get comfortable, I realize that the lift is about to come to a stop, and the guy at the top is already grabbing our bikes and gently placing them on the ground, while another guy lifts the bar off our seat and slows down our chair barely long enough for us to (almost) gracefully step off.

Standing at the top, I realize just how far down it is to the bottom. With the wind whistling around us, I’m absolutely paralyzed. Maybe they’ll take me back down on the ski lift? (I don’t think they do that.) The sky is grey and ominous, but it doesn’t seem like it’s actually going to rain, which is too bad. When it rains, they shut down the lift for a while. Then we could have just gone inside and been done with this, without me having to admit that I’m terrified.

“Let’s pedal around the top,” Phoebe says, grabbing her bike. We ride in circles in the flat open area, loosening up and calming down while practicing. On these new bikes, it feels way different from how it did back at Joyride on our BMX bikes. The handlebars are a lot wider, and it’s easier to sit down on these bikes, though Phoebe warns us not to.

“Trust me,” Phoebe continues. “If you sit down while you’re heading downhill, it’s going to be really uncomfortable—and kind of dangerous, since you won’t be able to move your body as fluidly.” She demonstrates, trying to take a tight turn around a tree while sitting down and almost falling as she slows down and turns her handlebars to point the front wheel around the trunk, and then stands up and takes the same corner, leaning her whole body as she swings into the turn. No braking, no turning the handlebars, just a smooth, speedy motion.

“When it rains, they shut down the lift for a while. Then we could have just gone inside and been done with this without me having to admit that I’m terrified.”

She makes it look easy, but I’m not fooled. After she pops off her bike, she makes us try to do the same. When she has us sit on the saddle and try to take a corner, I almost fall over, and Lindsay actually does. But she pops right back up, and says that the armour really does work. After a few more practice circles, Phoebe motions for us to follow her to the start of the easiest run on the hill.

“Don’t forget—we don’t stop until we’re at the bottom. But it goes fast. I’ll see you in about a minute!” she promises. 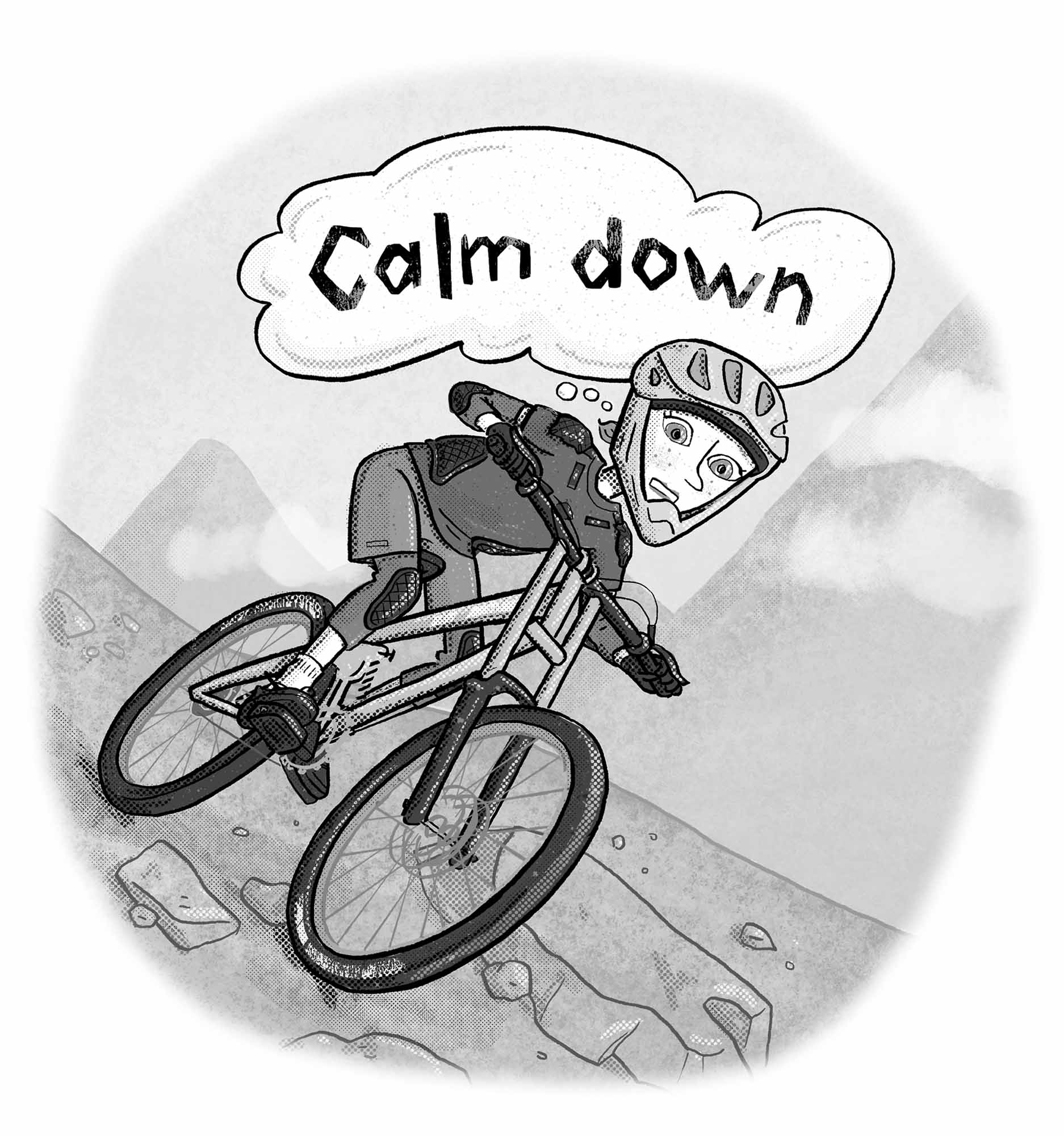 “Why don’t you go down right behind me, Ali?” she adds, and when I nod (why did I nod?!), she starts pedalling toward the start of the trail, and almost immediately drops out of sight.

I take a deep breath and follow her. I can hear Lindsay and Jen arguing about who goes next, but their voices quickly fade into the wind.

After a few pedal strokes, I hit the top of the descent and start going downhill. Ahead of me, I can see Phoebe swooping around the first turn, and my heart feels like it’s about to pound out of my chest. The turn is coming, my speed is going up, and I lean into it, forcing myself to keep my eyes open. And suddenly I’m around it and still heading down, but Phoebe is a bit closer than she was before.

Then I feel something else: fun. There’s that feeling of wind in my hair, I can see Phoebe ahead of me, and I’m keeping up… —ML

Shred Girls: Ali’s Rocky Ride by Molly Hurford will be published in Canada by Rodale Kids. Excerpt and illustrations published by permission. 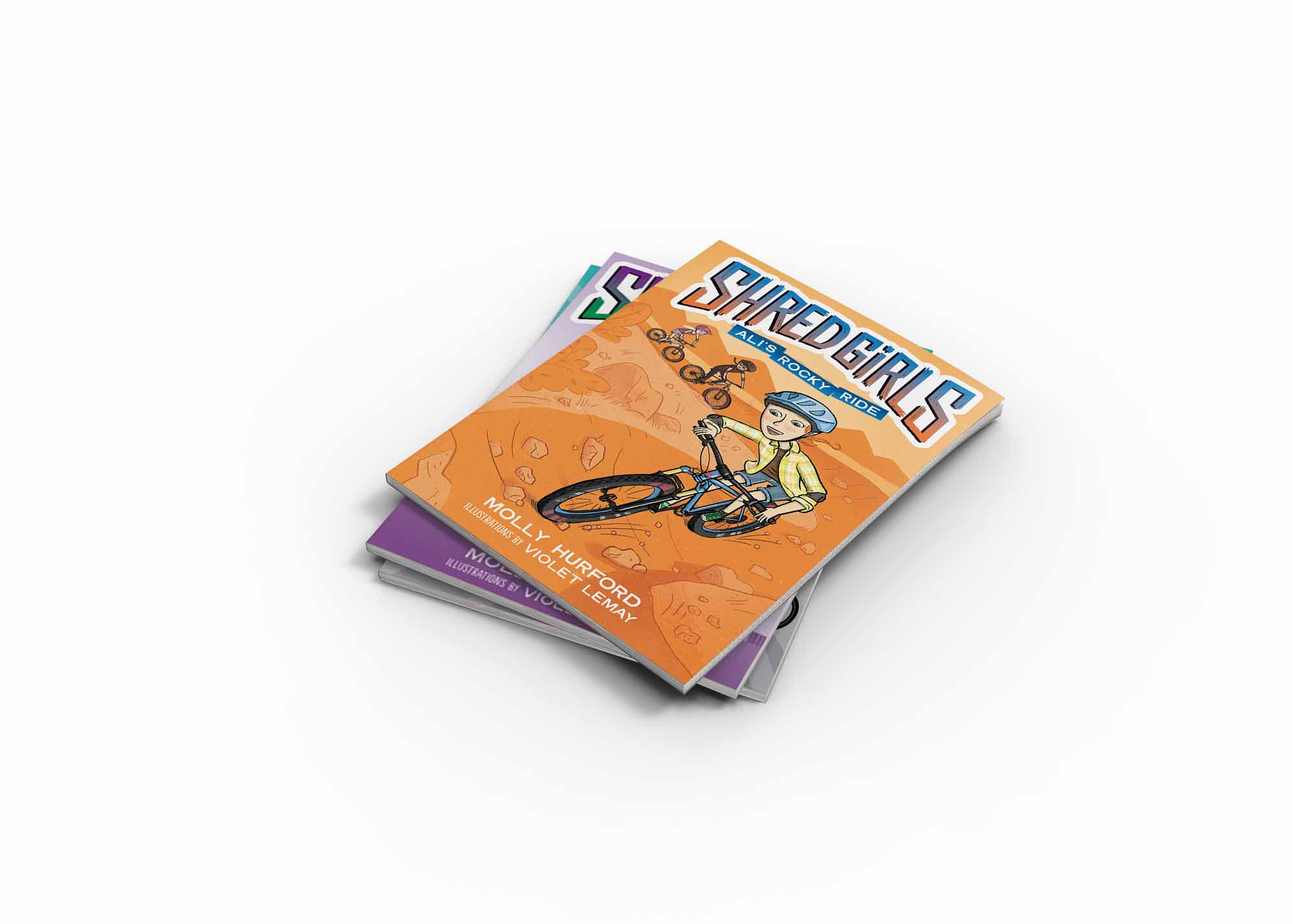 Electrifying the Sea to Sky: Mountain Biking’s New War in the Woods