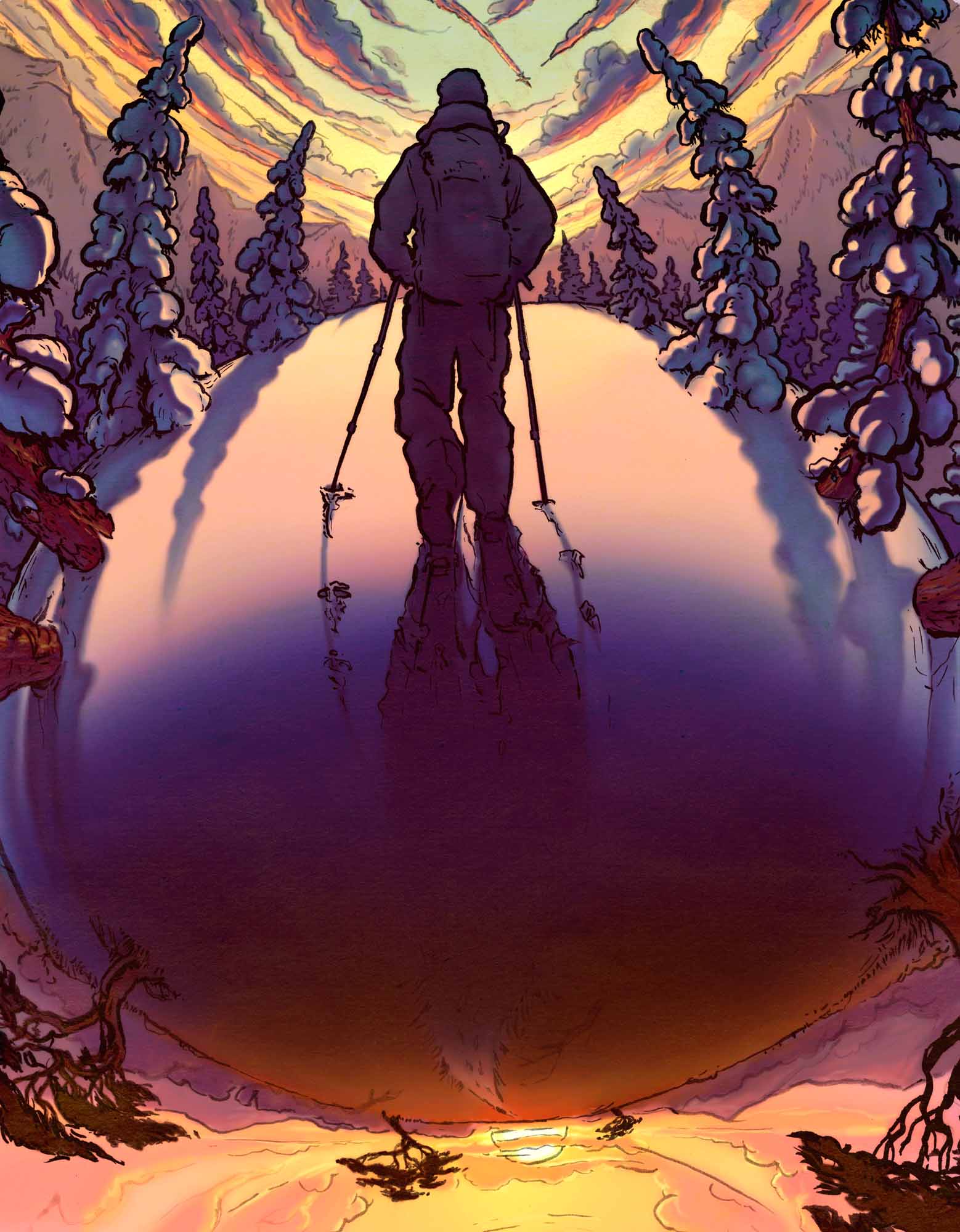 None of the primitive roads, tracks or horse trails in this part of the world show up on any maps. The people are nomadic, so even neighbours don’t know, exactly, where their friends and relatives are camped at any point in time. So, I am “lost” every day, all day, until “lost” has no meaning, because there is no “found.”

A herder invites us into her small yurt on the steppe. We stoop to enter the low doorway, walk clockwise around the smoky fire pit and sit in the place customarily reserved for guests throughout Central Asia.

An old woman seated in the shadows looks up and peers at us intently, her eyes still bright behind deep wrinkles and thinning hair, and asks, “Are you Russian?”

“Well,” she looks at us even more closely, “you don’t look Japanese. So, what are you?”

She shakes her head. “I never heard of those people.” And the old woman, no longer interested in our stories, retreats physically and emotionally into a reality I can only imagine.

Another time; another place: I sit on a small platform on the hillside, back up against a rock, and watch the ice flowing and churning, grinding and smashing in the strait below. A football field-sized floe, two metres thick, smacks into the rocky shoreline and, under intense pressure, rises vertically, groaning like an old man. The edges shatter against the cliff and sparkling crystals shower into space, reflecting rainbows that dance in the sun. It would be suicide to venture out there but here on the hillside, Boomer and I are safe… for now. The high Arctic sun is warmer than you might expect and with no wind, we joyfully soak up whatever photons come our way. Safe, but the innocuous expression “for now” is time dependent. Because if the ice doesn’t relax—soon—to open a viable passage that we can kayak through, winter will come and we will die.

For almost 50 years I have regularly and routinely traveled great distances across the globe, seeking the most remote cultures and landscapes on Earth. These adventures have formed me; they sit as a warm soft presence on my soul, and guide me into old age with their accumulated memories and wisdoms.

I am 74 now and, as I tell anyone who will listen, the paint is peeling and my fenders are rusting. Specifically: I can’t see well, I’m half deaf, my teeth are falling out and I pee too often. But my motor still runs okay and I don’t burn too much oil. Frequently, people ask me, “Where is your next big adventure, Jon?” And I answer, “Right here, in my backyard.”

Because time and time again, I’ve shrugged it all off, loaded carabiners into my carry-on to avoid overweight charges and hopped on that plane—to Katmandhu, Lima, Urumqi, Nairobi, or Resolute.

I don’t have the endurance, desire, or willpower to push my body to the extremes I have experienced in the past. Sure, I could continue to travel internationally—there are lots of opportunities for old people to wander about—but I don’t do that anymore. There are two other issues, besides age, that dictate my current choice of lifestyle.

The first is the carbon footprint thing. A person who flies roundtrip from Vancouver to Kathmandu is personally responsible for spewing 3.05 metric tons of carbon into the upper atmosphere. By comparison, the average Canadian uses 15.12 metric tons in a year. So, in those two days of flying you are using 20 per cent of your yearly allocation for a Canadian.

But wait a minute: the average European uses only 6.4 metric tons, so your flight emits nearly half the yearly carbon footprint of a relatively affluent person in London or Paris. And, moving down the line, that 3.05 metric tons for a nice jaunt across the ocean is more than the annual consumption for the residents of 107 less developed countries.

I’ve been an environmental science writer since 1970 and for the past almost 50 years, I’ve known that our profligate use of fossil fuels is rocketing our planet toward cataclysmic climate change. So, time to ‘fess up: I’m guilty. Because time and time again, I’ve shrugged it all off, loaded carabiners into my carry-on to avoid overweight charges and hopped on that plane—to Kathmandu, Lima, Urumqi, Nairobi or Resolute. And those years of globe-trotting adventure have been wonderful… But I can’t do it anymore.

It dates me as an old hippie and I’ve sworn to avoid clichés, but the timeless words of a classic Dylan song have been on auto-play in my head for 55 years even as times have, in fact, changed and focused the message of those lines at a new and perhaps even more urgent target:

There’s a battle outside and it’s ragin’

It’ll soon shake your windows and rattle your walls

For the times they are a-changin’

I can no longer look into the eyes of that old woman in the yurt, thank her granddaughter for a cup of tea and a bowl of noodles and figuratively tell them, “Sorry. My transcontinental flight, complete with seat-side movies and airplane-cuisine dinner and breakfast, is contributing to the global warming that is withering your grassland and killing your sheep and goats. Sorry if you don’t have enough to eat. But it sure is cool to visit your remote homestead.”

But now, here’s another “aha” moment in addition to the socially responsible Green-Think that is so mandatory in today’s world. There’s no big altruistic sacrifice here. I’m really happy playing in my backyard, or near-backyard. Duh… If you can imagine all the ranges, rivers, seas and deserts, from the Rockies to the Pacific, from northern British Columbia to the Mexico border, you will be imagining some of the most wild and beautiful landscapes anywhere on the planet. And even if I narrow the scope and draw a circle with a 500-kilometre radius from my home in Fernie, BC, or a 100-kilometre radius, or a 25-kilometre radius, there is a lifetime of high-quality wilderness recreation available. As an added bonus within these imaginary arcs, the natives are generally friendly. No days on the computer applying for visas, no sleep-deprived layovers in Frankfurt followed by cramped nine-hour sit-a-thons, no shakedowns and hold-ups in a railroad station in Almaty, Kazakhstan, no horrific Third World bus rides.

So, these days, all my recreation energy is concentrated on riding my mountain bike, skiing cool lines, backpacking—and every now and then, rock climbing or kayaking. Because what I really love, and have loved all these years, is the beauty and solitude of wild places. And yes, I also love the inexorable pull of gravity, the compression of the turn, that feeling as your skis arc and your quads burn, snow flying in your face. It’s in our DNA, I am certain, as part of our Paleolithic survival strategy, to cherish the act of movement itself, that allows us to escape a lion or chase a gazelle. The DNA doesn’t care that today the movement is expressed as ripping a tight couloir just ahead of your sluff or dropping a tight rocky turn on a single-track, when the hairs inside your ears are swaying gently to the centripetal forces you have created for yourself—like trees in the wind. Free of charge, close to home, always untamed… Ladies and gentlemen—the compression of the turn. —ML