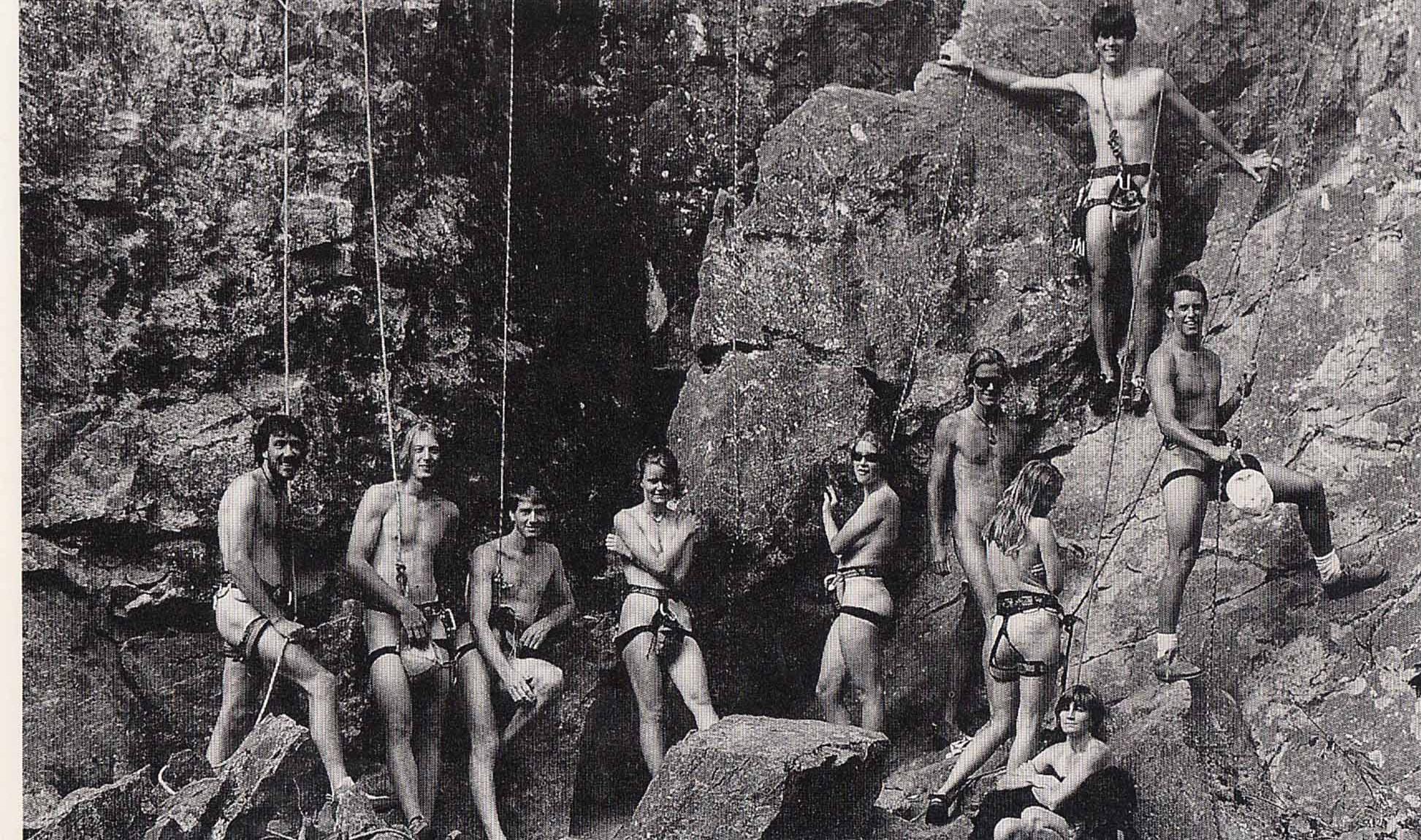 Mountain Lifer: Gary McFarlane is Who We All Want to Be Post-Isolation

After 30+ years as a world traveller, entrepreneur, community builder, and soft-core nude photographer, Gary McFarlane is making the logical next step to… ninja warrior?

According to Gary McFarlane, it’s a lot harder these days to be a true and proper dirtbag.

“For one thing,” he says, “you need to spend 75 bucks a month on a phone plan so you can post your photos on Instagram.”

Gary has faith that there are still penniless kids travelling the world like he did in the late ‘80s and ‘90s, but he’s aware that things have changed. “People still go on trips but the travel I remember is just taking off and seeing how long I could live on what little money I had. These days, a ‘dirtbag’ shows up at a climbing area in a $100,000 van and wants to camp for free. It’s different.” 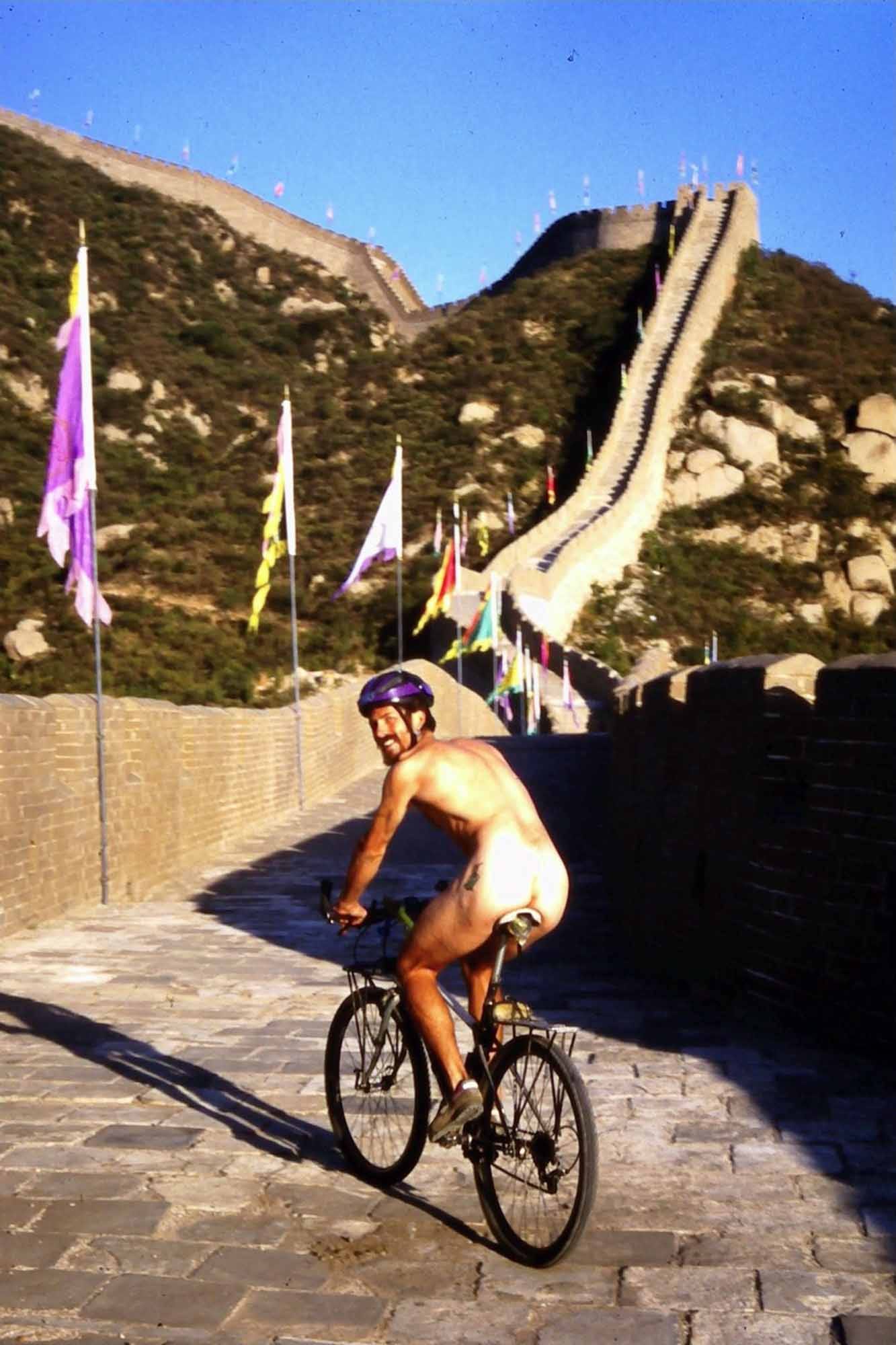 A born-and-raised Vancouver kid who got his first snowboard in 1982 (a wooden Burton Performer that he still has), Gary made it to Whistler in ’85. “They didn’t allow snowboarding so I skied—skied hard, worked at The Keg and went to Greece every summer where I slept in a bamboo hut on the beach, living cheap and partying.”

To stretch their limited funds, Gary and his buddies concocted entrepreneurial schemes. “We’d do hair wraps with yarn or organize parties and bring people to them so we could drink for free. I patched jeans for cash and one year I bought a bunch of bikinis in Bali and brought them back to Greece to sell on the beach. That dream job wasn’t so dreamy, turns out women are very particular about their bikinis and want to buy them before they go on holiday.” 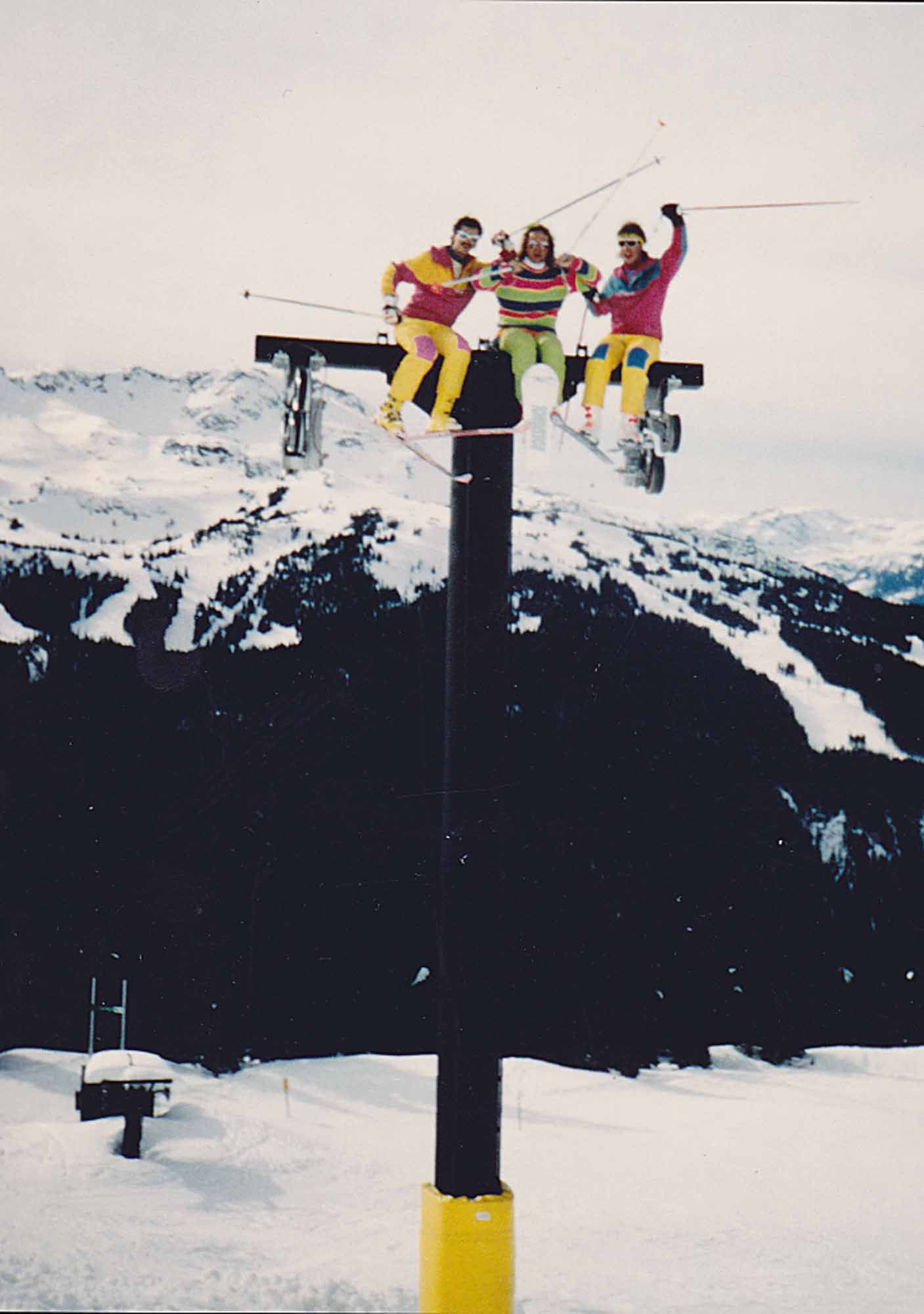 Working winters in Whistler fuelled the call to adventure and Gary dirt-bagged his way through Europe, Turkey, India, Pakistan and Nepal, en route to Annapurna basecamp. “The seats on the bus were too small for even my skinny ass,” he recalls, “so my buddy and I climbed onto the roof and rode on top of the bus all the way, listening to Cat Stevens and seeing the lights of Kathmandu as we arrived… we were just learning about the world and experimenting—young and strong and stupid, out there to push ourselves.”

After travelling through Southeast Asia (“met a girl, she broke my heart”) and working a stint in Australia, Gary returned to Greece, then Norway (another broken heart) and eventually Sweden, where he played a winter of hockey. “The Swedes thought I’d be good because I was Canadian. I had a different style than they were used to, but I think they got a kick out of having me on the team. Then I heard it was dumping in Whistler so I hitched back to Athens to fly home. I was back skiing and working at The Keg two days later.”

Another trip to Sweden for his brother’s wedding introduced Gary to rock climbing and bike touring. “My buddy and I rode around Sweden after the wedding and I got into climbing. With just a few months’ experience, I thought it would be cool to bike through Siberia and use the bikes to explore and put up some new climbing routes in China at a spot I’d read about. I’ve always suffered from a lack of perspective.”

“I didn’t know how they’d react to me but it turns out when you are a teenager with an AK-47, seeing a white guy in purple spandex riding up a dirt road in 40-degree heat is hilarious. They’d laugh and wave me through.”

What followed was a ten-month journey pedalling an early ‘90s Rocky Mountain Blizzard through Denmark, Sweden, Russia, and into the heart of Siberia. “We had a buddy who was in the Estonian mafia and he was really worried about our safety,” Gary recalls. “Then he discovered what dirtbags we were and realized no one would bother us because we had nothing of value. Siberia was awesome—fully forested.

One day we rolled into a village with wooden boardwalks and bought a bucket of potatoes and green onions off a babushka for ten cents. Our saddlebags were full so she laughed and suggested we stuff the potatoes in our spandex shorts.”

After his biking partner bailed somewhere in Mongolia (“open steppe, rolling hills, a lot of bugs,”) Gary smuggled himself into the then-closed Fujian province of China before skipping over into Vietnam and Cambodia—which he’d heard to be littered with renegade Khmer Rouge, forgotten landmines and armed government checkpoints. “I didn’t know how they’d react to me but it turns out when you are a teenager with an AK-47, seeing a white guy in purple spandex riding up a dirt road in 40-degree heat is hilarious. They’d laugh and wave me through.”

“One day, I hooked up with a Norwegian de-mining team who took me out into the field—that was absolutely terrifying. I was taking Barely Whistler photos by then so I had some good nude shots from Angkor Wat. Then I paid some guys to smuggle me into Thailand in a boat because you were supposed to fly in and I couldn’t afford it. Finally, I got to do some climbing ten months after I’d set out on my ‘climbing trip’.”

By 1996, Whistler was growing. The slow seasons were shortening, and Gary had found a reason to stay home in summer: along with friend Paul “Peanut” Carlson, and a select few rock climbers, Gary had discovered and begun developing a secret rock climbing crag just south of town.

“I was cruising the highway in my bitchin’ 1980 yellow Camaro when I noticed some rock near the Cal-Cheak campground. Peanut and I went in on a cordless drill, along with a few others, and started putting up our own routes. It was cool to have our own zone close to town.”

After bolting a bunch of routes in the most accessible area, Gary began exploring and noticed more climbs on the other side of the river—steep, technical basalt columns. “One rainy day, we hiked in from the highway and found that someone had left an old rope across the river. We tested it and it held, so we used it to put up a better rope, then a steel cable. Then we put up a chairlift.”

“These days a dirtbag shows up at a climbing area in a $100,000 dollar van and wants to camp for free. It’s different”

Gary swears the chair just appeared at his place one night after a party and he figured it would be perfect for accessing his new climbing zone. Eventually, the chair came down as the area became more popular. “By then, Peanut and I were selling photocopied guide books at the climbing shops,” he says. “We wanted people to climb there and put up new routes. Plus, the more guidebooks we could sell the less time we had to spend working in the restaurant. That was important.”

By 2003, Gary was living in Squamish with his girlfriend, working construction and looking for places to put up rock climbing routes in his spare time. “I was hiking up DeBecks Hill and Tonya suggested the trail we were using would make a good mountain bike trail. I’d never built one so I thought that would be an interesting thing to do. I knew nothing.”

That ignorance may have been bliss. Gary planned, laid out and built what would become Plural of Nemesis, a Squamish classic. “That got me hooked,” he says. “Mountain bikers were so appreciative. People were thanking me and meaning it! I was used to climbers bitching at me about my bolt placement instead of acknowledging the work that went in. Trail building was good physical work, mentally challenging and there was the act of exploring and finding new spots. It was all renegade. That’s how trails were built back then.”

As he aged, Gary continued building trails (Word of Mouth, Somewhere Over There, Rupert, and more) and began to choose the bike over his climbing rack. “Free time plays a role,” he says. “When you are young and you work a few nights a week, there is a lot of time to climb and that’s good because climbing takes a lot of time. With biking, you just jump on your bike and you are doing it.”

Free time is at even more of a premium right now because in the summer of 2019, Gary built and opened an indoor obstacle course/ninja gym in Squamish. “I was watching the Ninja Warrior show and I wanted to do that but there was nowhere to do it,” he says. “So I had to build it.”

And he did. Always the entrepreneur, Gary pieced together a 7,000+ square-foot indoor obstacle course, while also figuring out how to set up and staff a business. “I seem to go ahead with more enthusiasm than actual knowledge,” he says. “I jump into great ideas and then discover how much work they are—but there is this amazing feeling when you see a kid come into the gym and realize this is their place, somewhere they can challenge themselves and have fun. That is an incredible thing to see.”

And of course, Gary is in there hitting the obstacles—climbing and jumping and swinging and falling as much as he can. “Looking back, I guess I’ve always sort of been building my own playground,” he says.

Now in his fifties and with a full-time business, Gary doesn’t travel as much as he used to (and he gets better hotels when he does), but that spirit of adventure and “making it work” still runs deep.

“I think the secret is your attitude,” he says. “Everything changes, and if you dwell on the past or worry about how things used to better, you won’t be happy. Everyone’s glory days are back there, so find new interests and new passions and look ahead and embrace. My dirtbag travel climbing days are behind me—dirtbagging in general might not even be the same, but my glory days as a ninja warrior might be just ahead.” —ML

In the summer of 1991, Gary started making postcards of his favourite mountain sports to earn extra cash without clocking into a real job. To stand out in an oversaturated market, he decided that the models in his photos should be naked—naked on skis, naked on chairlifts, naked on rock crags, bikes, rollerblading, at the bar—even on the golf course. Barely Whistler postcards were born.
“It started when I did a slideshow of one of my trips and everyone had a laugh at these naked pics that kept showing up randomly,” Gary says. “Naked guys on bikes, naked hiking—and since it was a party, some drunk guy yelled out that I should make postcards. I woke up the next day and just ran with it. It was hard to get models at the beginning, but once people saw the postcards it was no problem.”
Barely Whistler postcards were cheeky, but tasteful. In a sea of cookie cutter images of one-piece suits and alpenglow from every angle, Gary’s cards marked another small victory for Whistler’s counterculture in a town that was rapidly pushing in the other direction. –Trevor MacDonald