The Seagull Feather flies north for the summer

Winter was over and our plan was loose, and while the weather forecast wasn’t ideal it didn’t look unmanageable… We could hear the North calling.

Alaska can be unpredictable, so we packed accordingly: skis, surfboards, disassembled mountain bikes, fishing rods and camera gear all went into the back of the Seagull Feather, Rory Bushfield’s Cessna 180. We were ready for anything and had no schedule beyond knowing which airports had gas.

Flying low and dodging storm cells in the Seagull Feather, I became enamoured with the beauty of the “inside passage” up the BC coast. Hopping from island to island, we crossed stretches of water slightly larger than we were comfortable with, while low clouds prevented us from flying at the ideal altitude. It was great for shooting photos and scoping potential surf beaches, and Bushy found some openings over the biggest waterways, allowing us to climb up to a safe crossing height. But we had the wetsuits right behind the seats, just in case.

Like many, I gravitate towards pristine nature. Alaska is a land of unadulterated beauty and grandeur, so this trip has been a dream for Bushy and I since we started flying together. I was nervous and honoured to be in the co-pilot seat as we navigated into a world of unknowns.

The clouds kept us pretty low all the way to Alaska but with a few pit stops for fuel, some solid navigating and a bit of good fortune, we eventually touched down in the land of the midnight sun and kicked off three weeks of Alaskan living: no schedule, no deadlines, pure exploration.

Bushy and I had few contacts up north, so this trip also served as an opportunity to meet new people and connect with those who live and breathe the Alaskan spirit of adventure. It didn’t take us long once the wheels were on the ground. We had reached out to a few “internet friends” prior to our voyage, but meeting these Alaskan locals for the first time felt like reconnecting with old friends. These guys get after life and that frontier spirit is steeped in everything they do—Alaska is definitely untamed.

Early summer north of the 55th parallel provided us with more than enough daylight to surf past midnight, camp on beaches, rip around iceberg lagoons and fly over the wildest landscapes I could ever imagine. Alaska exceeded all expectations, and after three weeks and thousands of kilometres, we fired up the Seagull Feather and set off back for BC. I’m pretty sure we found the Holy Grail on this trip, now it’s just a matter of trying to put all the pieces together our next mission, and find it again. 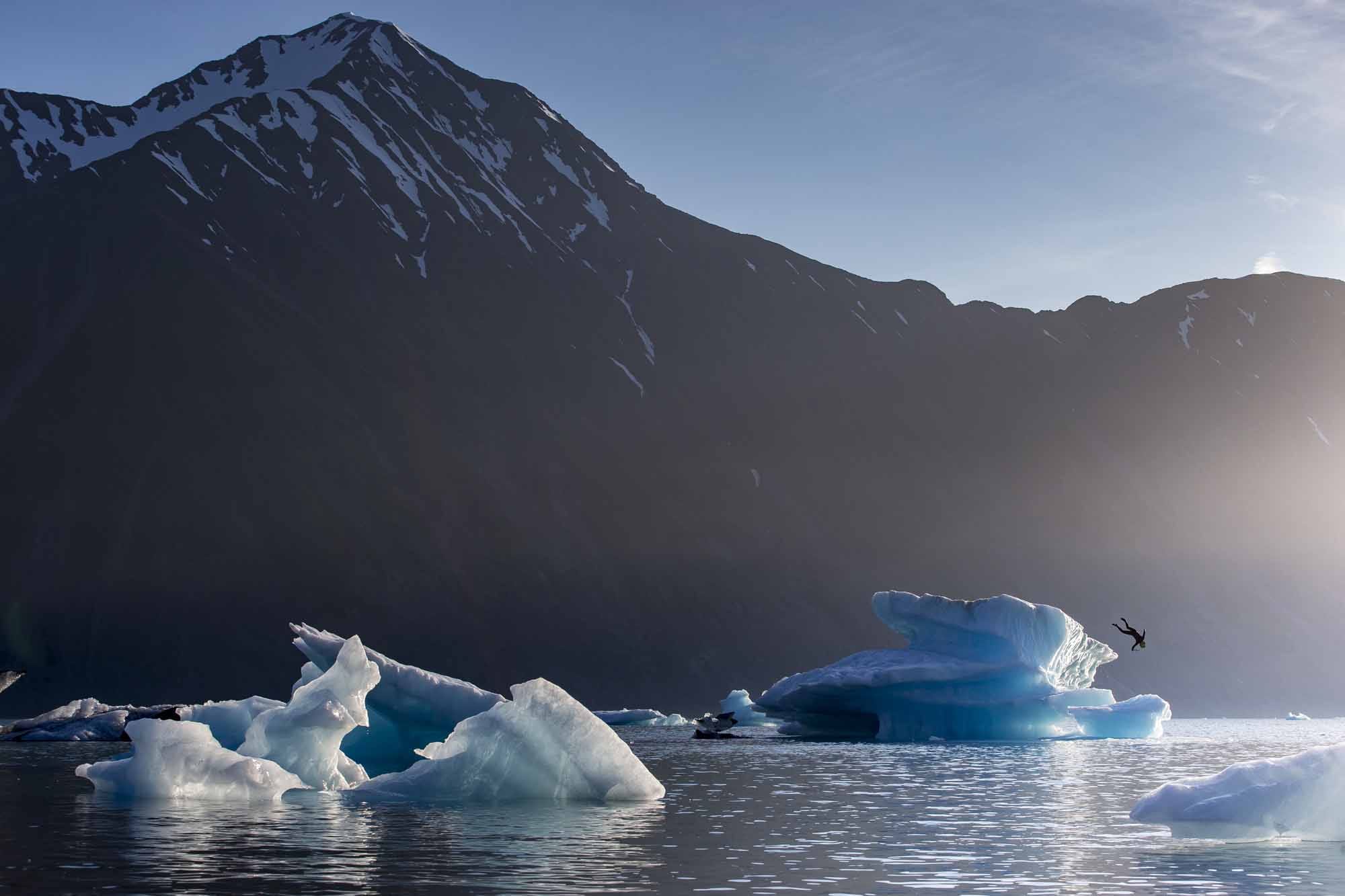 Wandering the shores of a glacier lagoon, Bushy searched for the tallest icebergs to jump off. Equipped with an ice axe and a surfboard, he paddled out and clamoured up the slippery edges and somehow found a sketchy but jumpable spot. The thing about icebergs is you only see 20 per cent of the ice. He landed in about five feet of water before hitting the ice underneath. 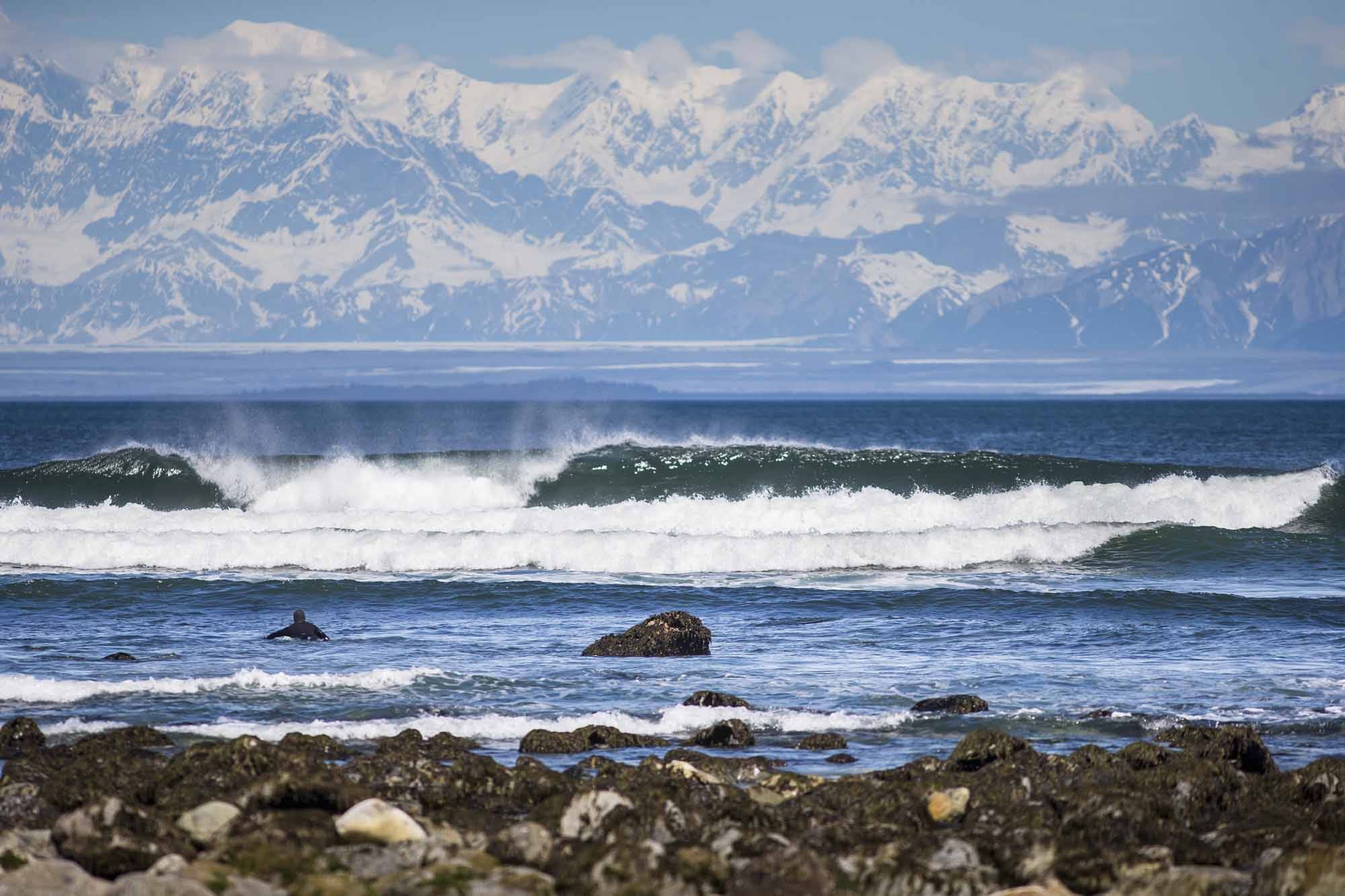 Time is dilated during an Alaskan summer. We were far enough north that the sun barely set, and it was never truly dark at night. Paddling out shortly after midnight, we surfed blue-hour light alongside sea lions who were robbing salmon from set-nets placed along the bank just beyond the surf break. Back at the beach, we warmed up by a recently-abandoned bonfire and watched the never-ending sunrise—capping off what was quite possibly the best day ever. Sleeping next to the fire, we woke up to some perfect small waves and incredible views. We continued surfing until we were fully content. 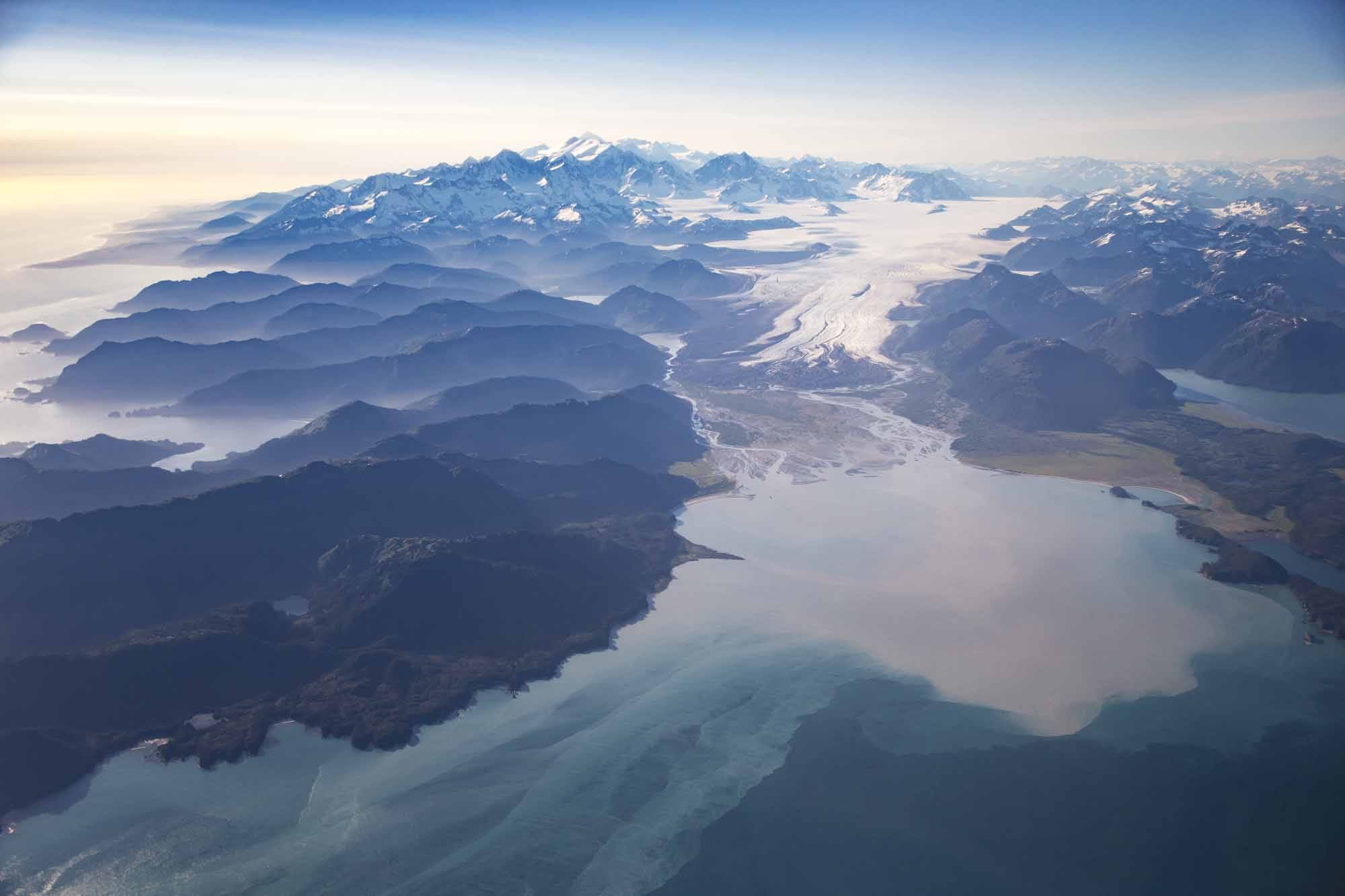 It’s rare to have ‘fair weather’ in the Fairweathers and because we had limited fuel for the distance we were traveling, Bushy only gave me one opportunity to get a wide aerial shot looking back at this magnificent mountain range. I can’t wait to put my feet on the ground there one day. Until then, I’ll just look at this photo and dream. 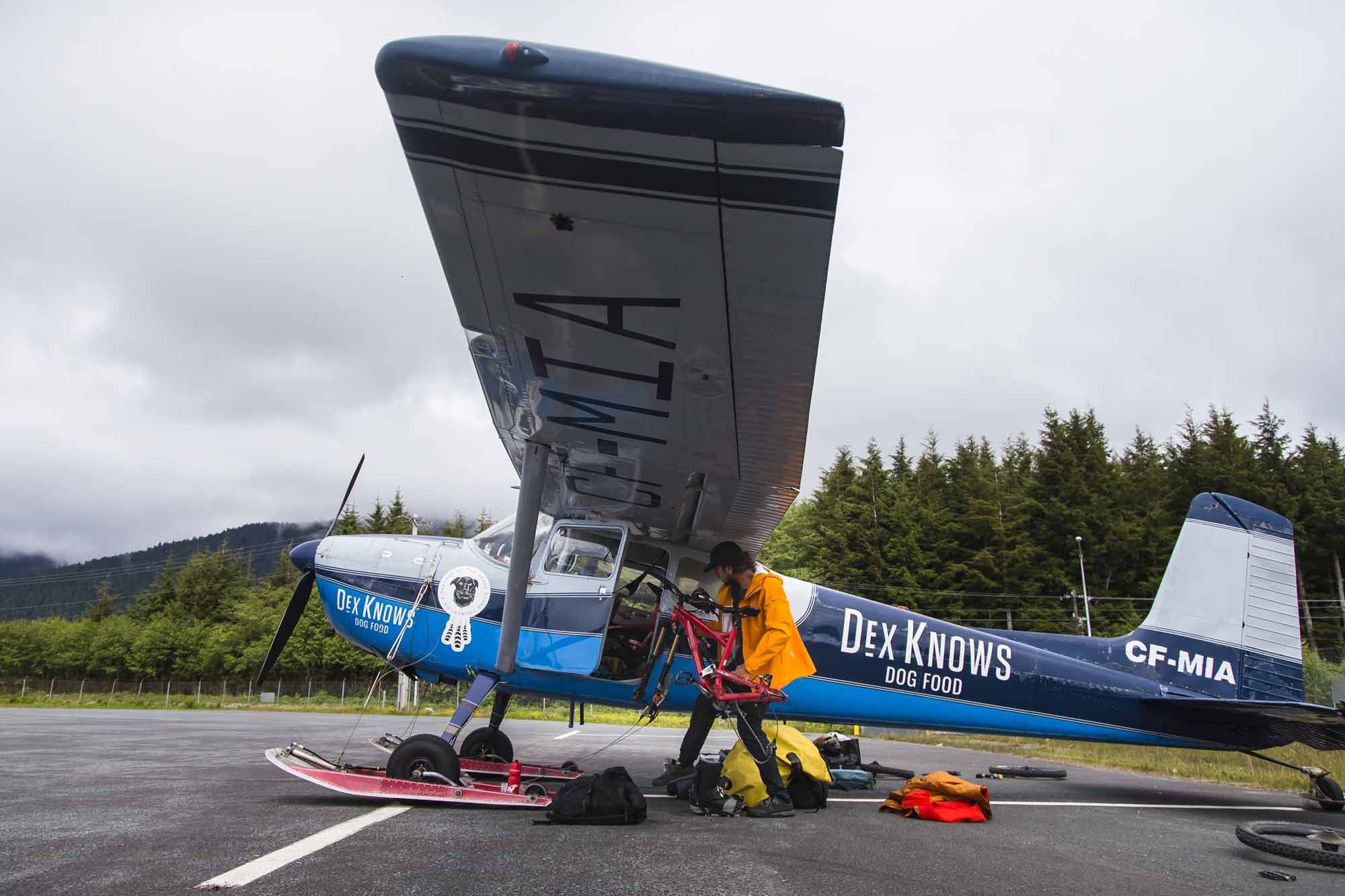 It’s like a three-dimensional puzzle, every time we stopped the aircraft, we (me) had to unpack and repack the plane to access the necessary equipment for the day’s activity. 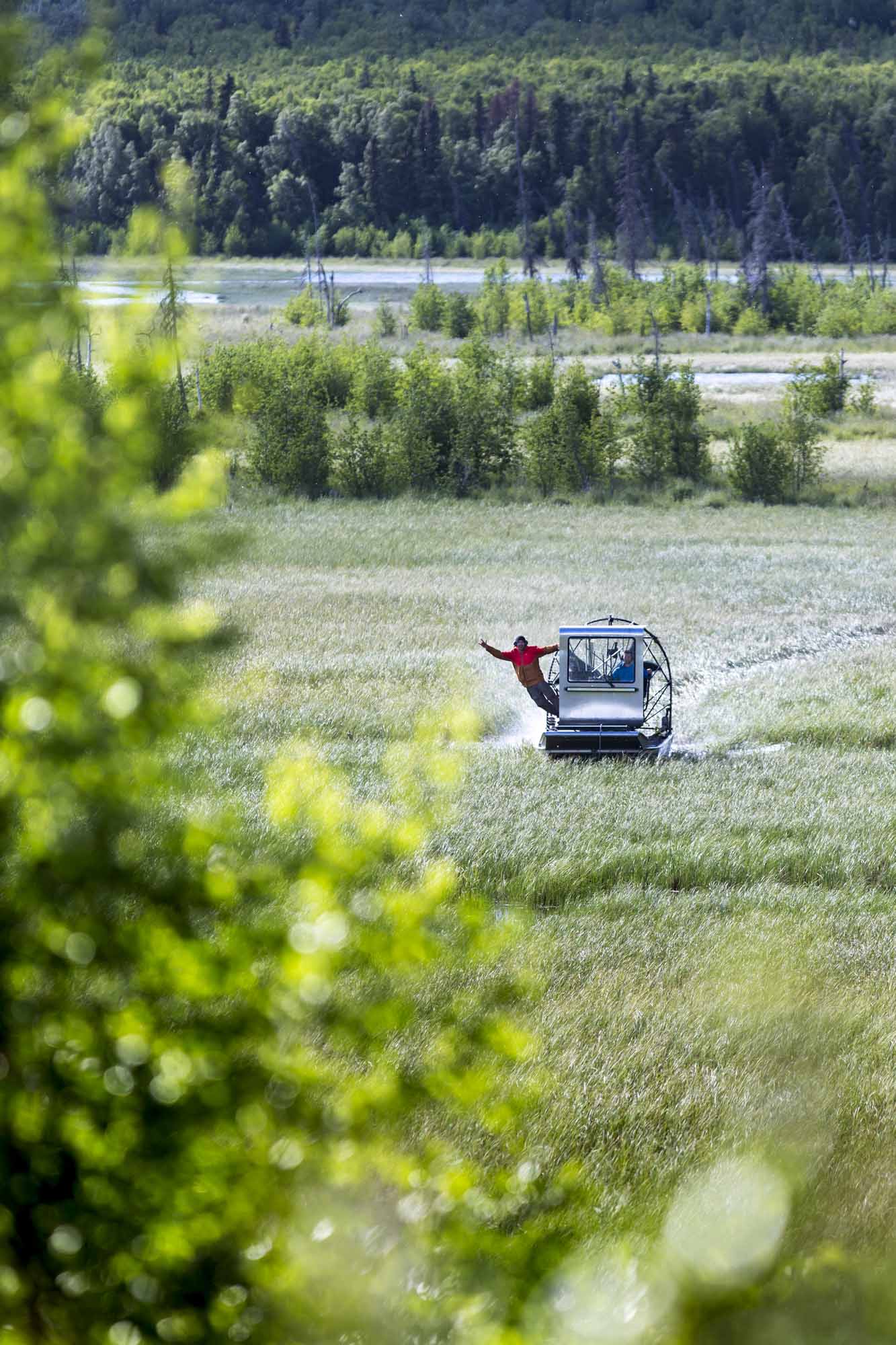 Safe to say Bushy is a huge fan of this boat. 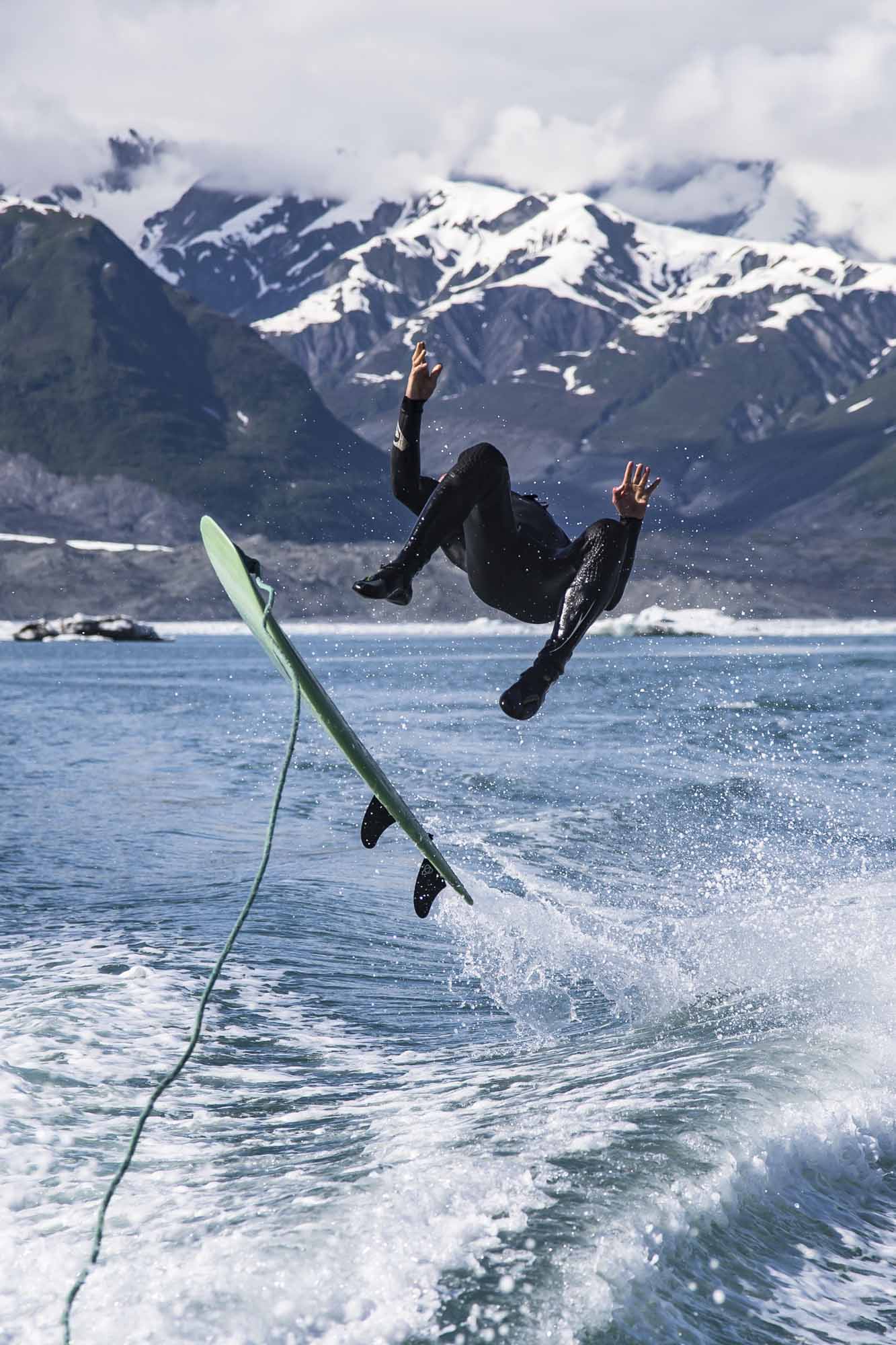 We hired a local Indigenous fisherman named Surfer Dave to take us out riding in the icebergs. Whenever the opportunity presents for a backflip, Bushy will flip. 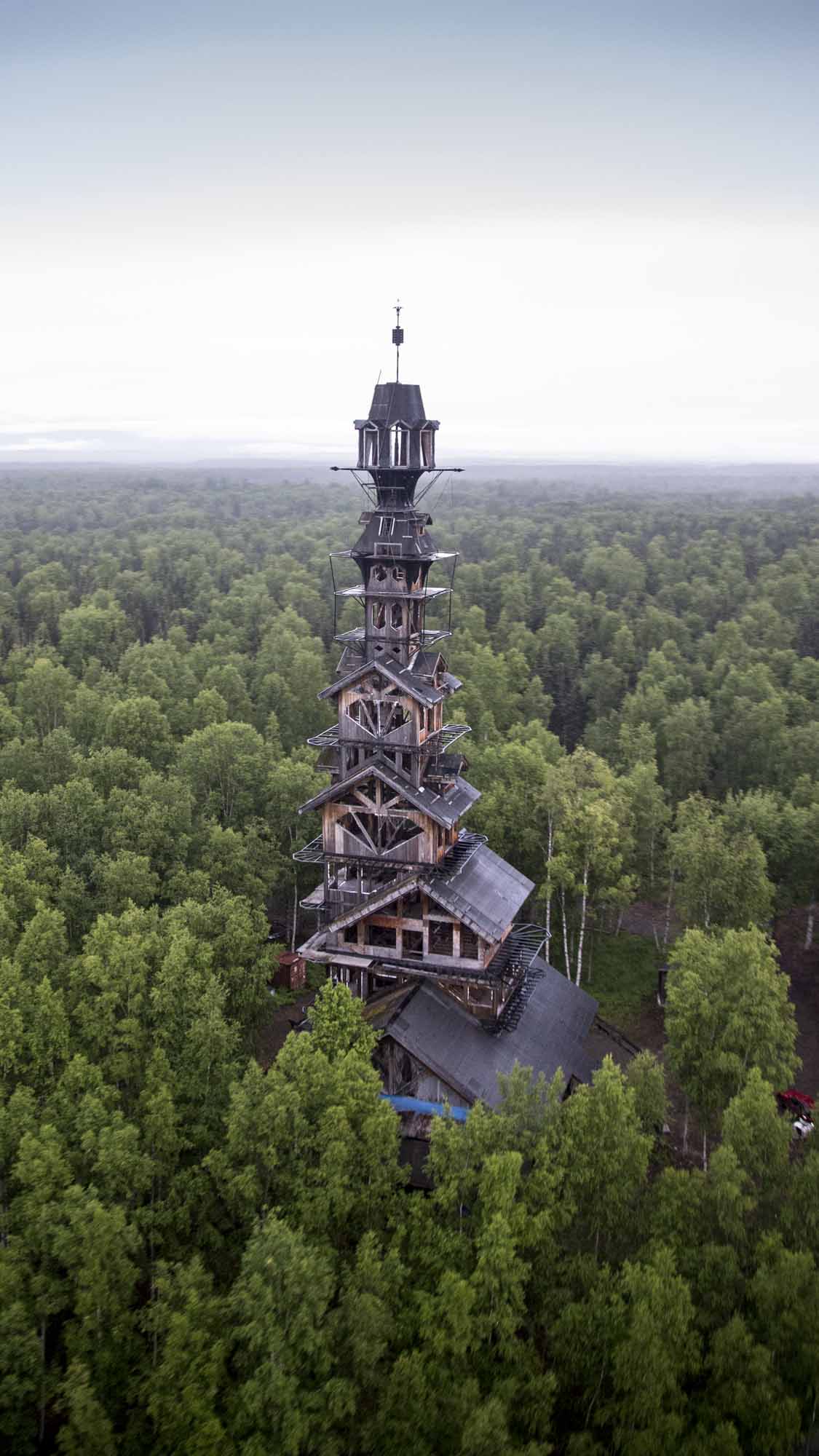 Building codes do not apply. The locals call this the Dr. Seuss house. Strangely enough, it’s abandoned but the story goes that the tower was constructed to provide a view of Denali on clear days. 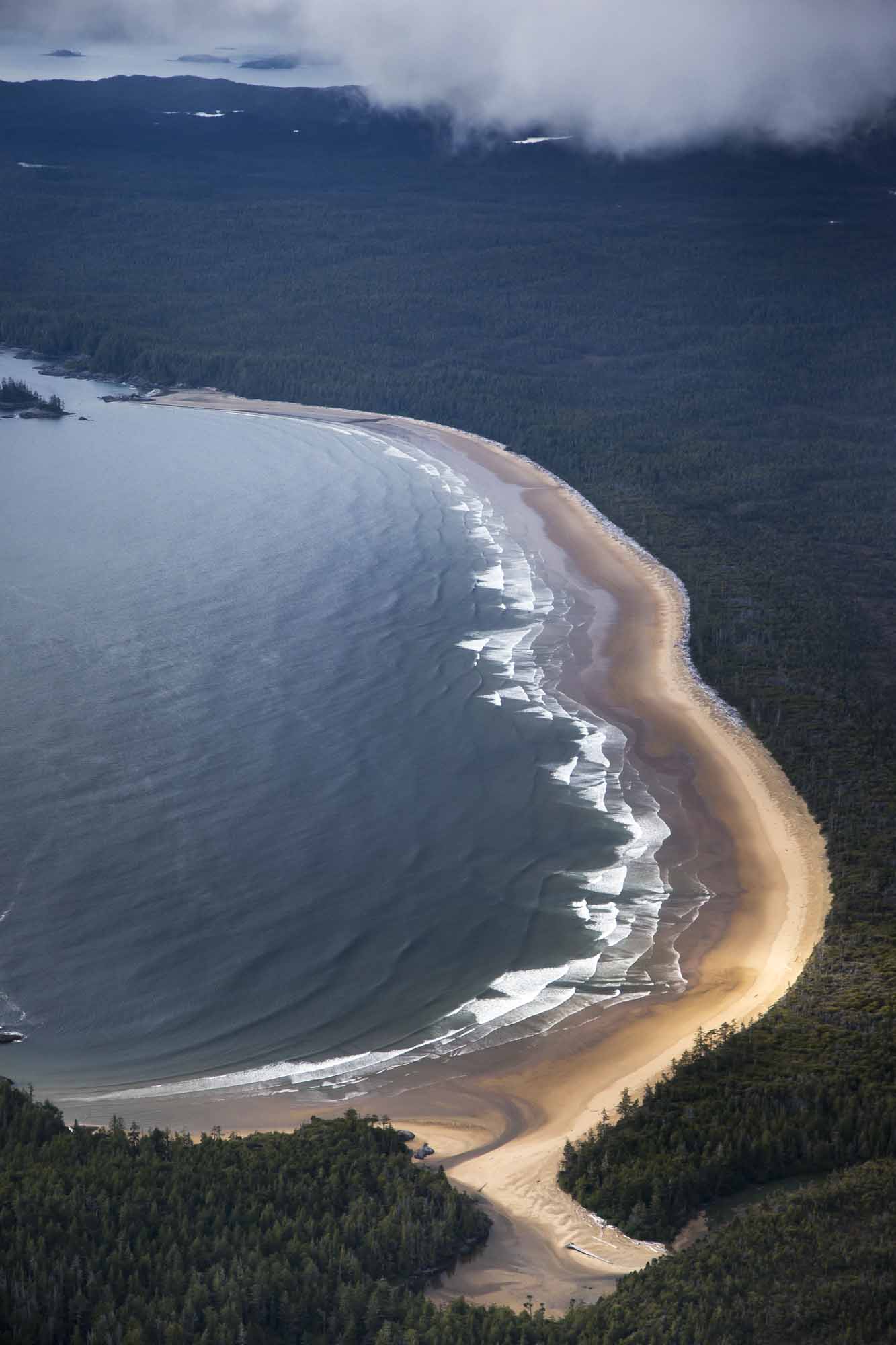 Camp Frogwater. It was a pleasure to fly by some of the places we’d adventured in the past. Shortly after this, everything we were seeing was new to our eyes. 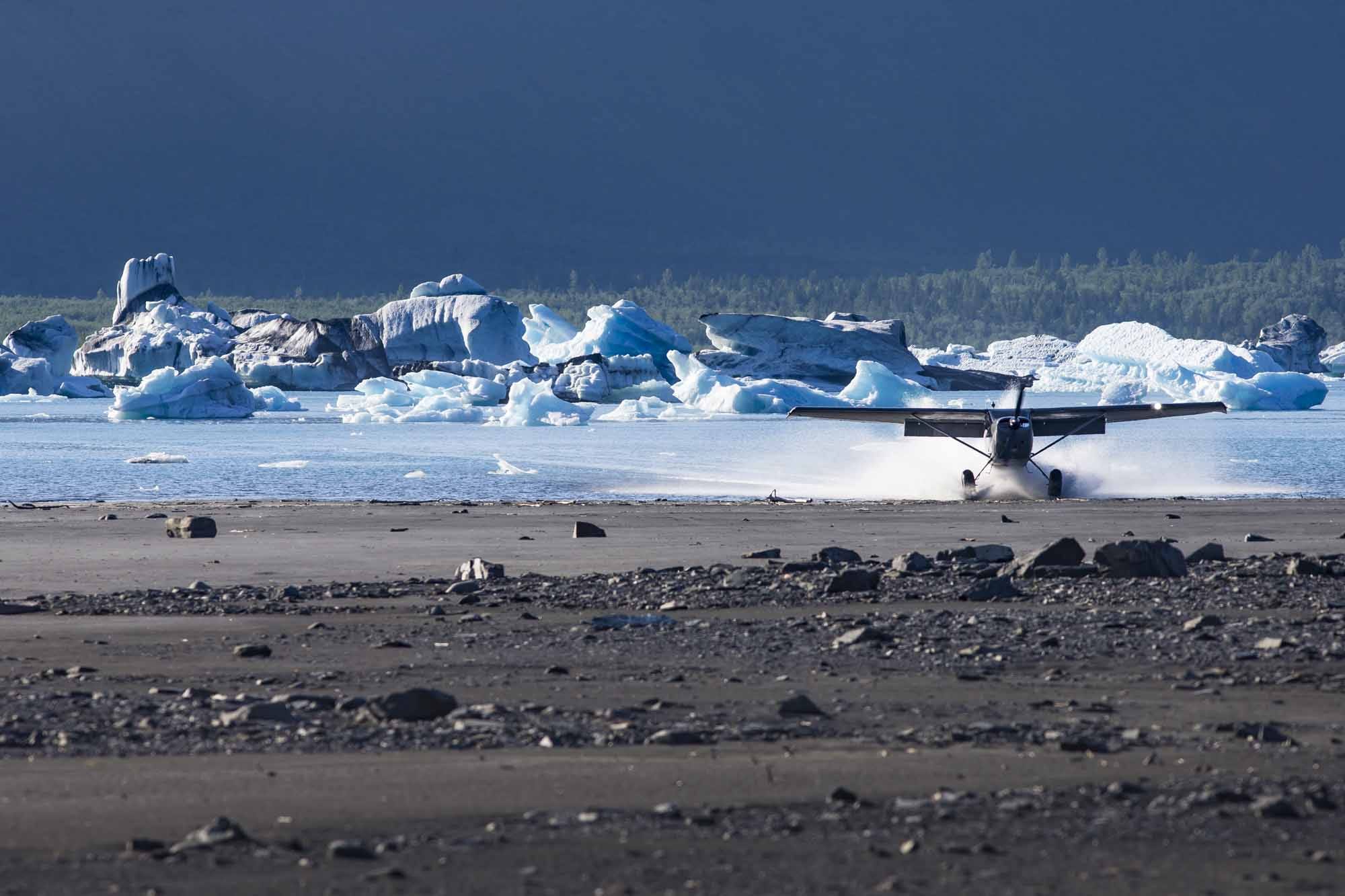 We connected with James Spikes, who also flies a Cessna 180 and is a master of short takeoffs and landings (STOL). He escorted us out towards the Tordrillos, where we’d make a successful high landing. On the way back south, we hopped in his plane and flew to a remote glacial lagoon chock full of icebergs. On his final approach, Spikes skimmed the plane on the water through the icebergs and plopped it right onto a sand bar. It blew our minds. 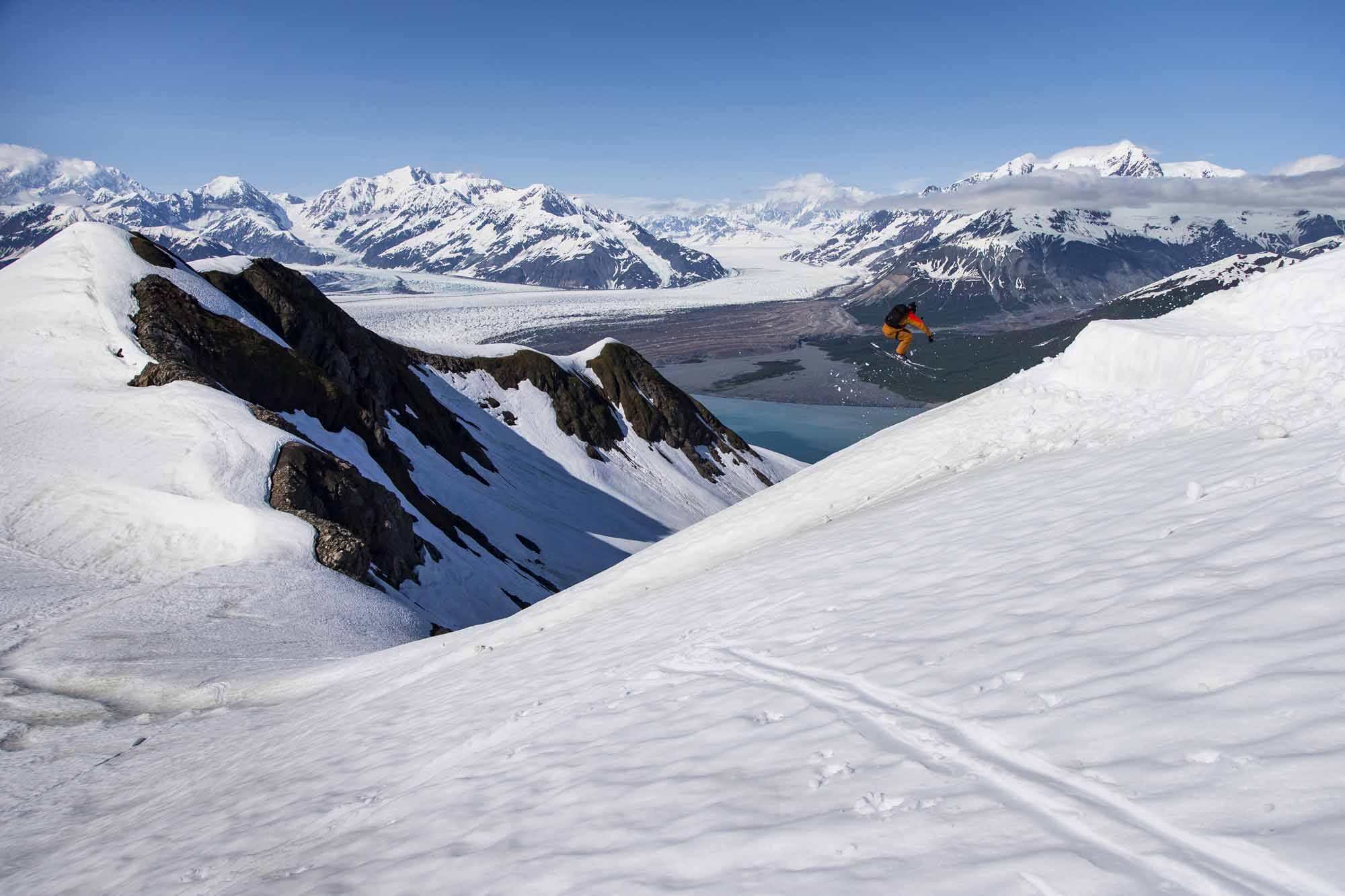 The view was too good. We felt obliged to put up a small jump. The landing totally sucked, but with Bushy’s classic cat-like abilities, he managed to stick a 360.