You’ve probably been there before. Dirtbagging your way around as many countries as possible during an exotic soul-searching adventure, staying in the worst possible hotels and eating cheap street food in an honest effort to prolong the experience. For many, it’s the only way to travel.

For Tim Leatherman, shoestring travel hatched an idea that would change his life forever. In 1976, Tim and his wife Chau set off on what would become a 17-country road trip from Europe to the Middle East in a clunky old Fiat 300 that they bought for $500. The car broke down repeatedly and they stayed in many $3-a-night hotel rooms, all while trying to find the answer to one question. “What are we going to do with our lives?”

One night at a hotel room in Tehran, Leatherman tried to turn up the heat on the room’s thermostat but it wouldn’t budge. “If only my Boy Scout knife had pliers, I could turn this knob on the radiator and we’d have heat,” he thought. This was his ‘aha’ moment. With pliers and a knife in his pocket, he could fix things in the Fiat and whatever else inevitably arose on the road. When he returned to the USA, he asked his wife if he could spend one month to tinker with his idea. One month turned into two years before he had a prototype. He was told time and time again that it was too expensive and wouldn’t sell. Another six years passed before any manufacturers would even talk to him.

“He got rejection letters from almost every tool and knife maker in North America from that era,” says Adam Lazenby, Design Engineer at Leatherman Tool Group. “ He never wanted to start a company, he just wanted to sell the idea. They all told him ‘this is a stupid idea, it’ll never take off.’ So finally he just said “Screw it, I’ll do it myself.”

He kept refining the product (then called the ‘Pocket Survival Tool’) and eventually got an order from Cabela’s for 500 tools — but he needed to sell 4000 to break even. Excited but still facing a long uphill battle, he chose to forge on in hopes that he could sell the other 3500 units somehow, some way. Early Winters (a now-defunct outdoor retailer) also came on board with an order for 250. Before he delivered the 750 units, both companies had placed the product on the back cover of their seasonal mail-order catalogues. The placement was a home run. They sold out in the first week. Orders doubled in the third week and an impressive 20,000 orders were placed. The new company went from ‘How are we going to sell these?’ to ‘How are we going to keep up?’ That was 1983. Leatherman became an ‘overnight’ success in just eight long years.

Leatherman was soon selling more than they could handle and they needed help. A fresh-out-of-college Ben Rivera was hired in 1991 as a Manufacturing Engineer to improve quality, performance, speed and yield. “Everyday I’d do laps around the building to try and improve things,” says Rivera. “Then in 1993 we decided we needed a new product, my role involved into that of Design Engineer.” Rivera was responsible for the wildly-popular WAVE model (launched in 1998) that became a million-unit seller almost overnight.

Today, Rivera is now Leatherman’s President and CEO, and the longest-serving employee amongst the 500+ plus workers at the Portland, Oregon headquarters. He’s so loyal to the brand he even used the scissors on his Leatherman to cut his baby’s umbilical cord. From 1991 to 2013 Rivera was responsible for the design and engineer in all Leatherman products. Some say he’s even more Leatherman that the founder himself.

On a recent 4×4 experience with CEO Ben Rivera in the wilderness of Coastal British Columbia, I learned first-hand where the buzz for the brand started in the 80s, and how it came to be a household name for multi-tools, like Kleenex is to tissue.

“Tim is purely about product,” says Rivera over a flickering campfire deep in the Squamish Valley. “He wants to make things better everyday. It was never about building a brand or advertising and marketing. It all came down to the product.”
He finishes his sentence as a wasp lands in his ceramic cup of white wine. Rivera pulls out his WAVE, unfolds the pliers and gently pulls out the wasp without harm.

Like in this instance, it’s the quirky, unexpected uses that Leatherman users all over the world have shared with one another that helped build to what it is today.
“It was word of mouth, honestly,” says Rivera while roasting s’mores at a blissful beach on the Elaho River. “People would be sitting around a campfire like we’re doing right now and they’d be talking about a recent hunting or camping trip and how their Leatherman saved the day one way or another. That was basically the social media that built the Leatherman brand.”

“We get stories sent to us all the time,” says Lazenby.” Some of them are pretty wild.” They call them ‘Tool Tales’, and Ben Rivera has a couple of favorites:

“We once received a voicemail from a retired fireman based in San Diego. His grandson, a navy medic assigned to the Marine Corps, was serving his first tour in Iraq. A grenade hit his Humvee blowing up the vehicle and medical kit, and at the same moment, a marine was hit in the throat and couldn’t breathe. He took the only tool on him, which was a Leatherman, and used the tool to perform a roadside tracheotomy ultimately saving the Marine’s life.”

“A cyclist was out riding on an old country road when he noticed a very stressed doe, upon further investigation he realized her fawn was trapped in a fence. Using his Leatherman to cut the baby deer free, he watched the doe and fawn run off. However, he promises the doe looked back at him, thanking him for saving her baby’s life.”

Lazenby is the smart-as-a-whip, young gun at the company’s design helm who possesses the perfect amount of geek/tech/engineering DNA needed to bring new tool designs from concept to reality. ‘It’s really inspiring to create something that means so much.” he says, plucking away at the string of a mini travel guitar by the campfire. Lazenby is responsible for such things on the new FREE series like one-hand-opening, ‘epic haptics’ (his phrase to describe the little sounds that come from clicking individual tools in and out of their respective places), no fingernails, and many more features that consumers didn’t even know they wanted to have in their pocket.

“These were all things we learned from watching people “fail” at current multi-tools. After watching people not being able to close something and getting embarrassed and just setting it down — that helped us come back with a big list of requirements. If you make something nice to touch people just inherently touch it more often and it’ll be something that doesn’t just live in their pocket, but something they’ll actively pick up and hold onto.”

Today, Leatherman sells more than three million units every year — each one designed, engineered, built and tested inside of their 90,000 square-foot manufacturing facility in Portland, Oregon. While Tim Leatherman is still involved in the company, Rivera’s plan for tomorrow involves retaining all of the authenticity that has made the brand what it is today.

“Someone on this trip asked me what I’m most proud of. What really gets me out of bed, and what I’m really most passionate about, are the stories from consumers that use the product,” he says, throwing another log on the fire. “What means the most to me is to preserve the culture and the values of the company for another generation that comes behind us.”

This generation to come will still go on soul-searching travels. They’ll still need to fix things along the way. Only  now they’ll have a Leatherman in their pocket — they can thank Tim and his wife for that. —ML 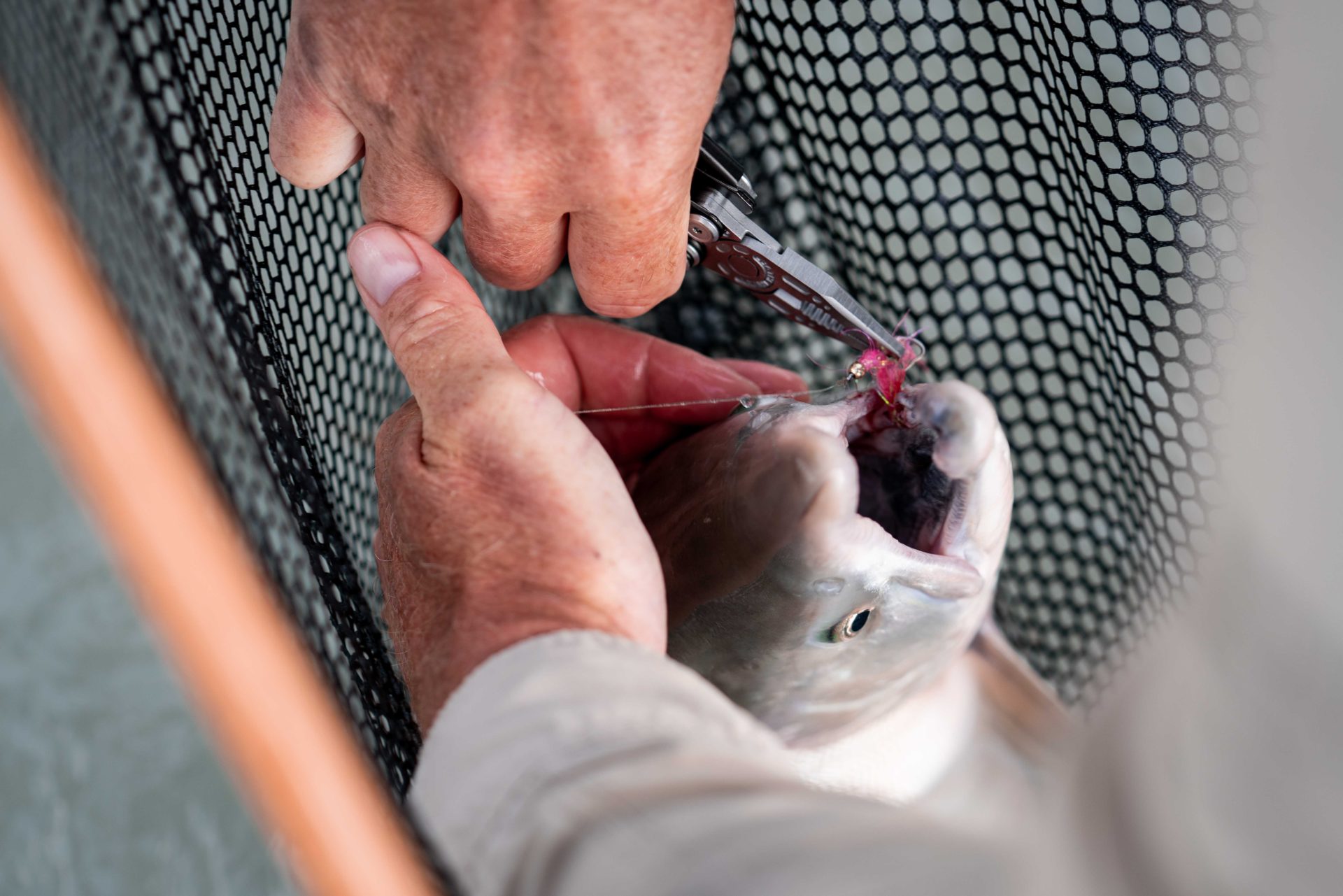