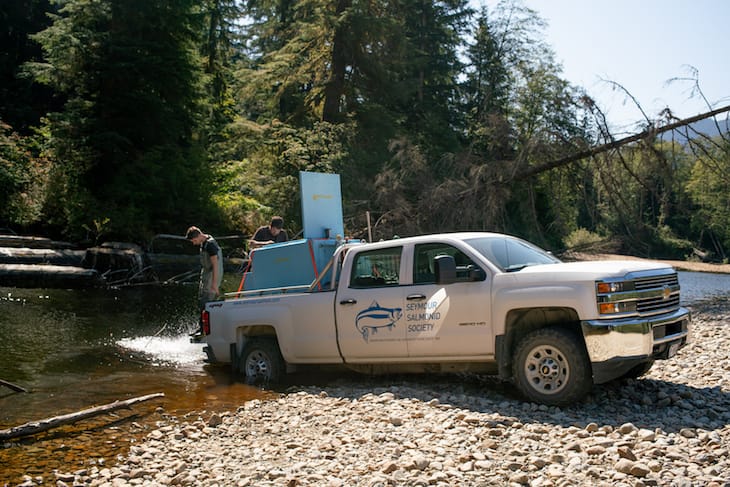 On the banks of the lower Seymour River Brian Smith’s voice carries a tone of urgency, he is instructing two dozen wader-clad volunteers on how to manage the seine net laid out at their feet. The green nylon net is 60’ long and 4’ tall, with floats fixed along the top edge and weights below. It is pulled across the river and then down and back, scooping the fish into a horseshoe where they can be netted and moved to a specialized tank fitted to a red ATV waiting on the river bank. “We don’t want Chinook, Coho first.” he explains, while his hands orchestrate. This isn’t Smith’s first rodeo. His role as manager for the Seymour Salmonid Society has required persistence against odds that increasingly stack against, rather than for these fish. But as one might learn from the Salmon’s story, persistence pays off. Of the 214 fish collected today, 62 spawning Coho will be placed above the Seymour Falls dam –the first in over 80 years.

The Seymour River Salmon run was first displaced from their spawning grounds in 1928 by the construction of the Seymour Falls dam, a project that replaced two pipelines being used to supply water to the nearby municipalities of North Vancouver, South Vancouver, Richmond and Burnaby. Following the completion of the dam, the Supervisor of Fisheries R.W. MacLead, expected a light salmon run in the fall of because much of the stock had been “materially reduced” during construction. In 1961 an expansion project was undertaken to keep up with the ever-increasing water needs of the Lower Mainland, nearly tripling the Seymour reservoirs capacity. It would be another 15 years before the importance of the Salmon run was considered, this epiphany led to the creation of the Seymour Salmonid Society and Hatchery in 1977. The program was designed in partnership between BCIT and community stakeholders to understand, mitigate and restore the damage of the last half century. Each year the Hatchery currently raises 30,000 Steelhead smolts and 120,000 Coho in their facility. Of these; 40,000 fry are released above the dam, 35,000 into habitat projects below the dam and the remaining 45,000 are introduced to the river as smolts ready to begin their journey to the sea. Every second year an additional 500,000 pink smolts and 500,000 chum smolts are released. Although these numbers can be overwhelming, historically this river ran in the millions.

It was known, before the European settling of the Lower Mainland that the well-being of the humans in this land is directly in relationship with the well-being of the Salmon, an idea that may have been hard to grasp for the newcomers when fish were plentiful. In our modern age, as western scientific understanding catches up to the traditional knowledge that was overlooked all those years go, we are realising that the privilege we held for ourselves –as something outside of these natural cycles- is no longer there to hide behind. We can no longer stand on the banks with dry feet wondering at the tenacity of the Salmon family as they make their way home, pushing ever upward against the flow. We must get wet, face the muddied waters and persist beside our brothers & sisters.

In 2014 the returning Seymour Salmon found themselves up against another hurdle, a major rockslide in the narrow and steep walled canyon completely cut off the river only 5km from the ocean. As of August 2019 the rock removal efforts had successfully opened a channel through the debris but it wont be until later this fall when water levels rise that the Society will be sure of how well Salmon can navigate this new section of river. This uncertainty means that the Society, with the help of Volunteers in the community, will continue transporting Salmon above the slide, 15km upriver. The Society is hoping to complete 4 more seining sessions this Fall before river levels rise with the rains and is on the constant search for volunteers to help with the efforts. The next two sessions will be held on Tuesdays(Sep 17th and 24th), the remainder will be on Thursdays(Oct 4th and 10th). For more details and scheduling info please visit http://www.seymoursalmon.com/contact-us/

There will also be a “Rivers Day” event held on September 29, 2019 at the Seymour Estuary(at the mouth of the river), this event will involve clean-up and replanting and is open to anyone interested in lending a hand.—ML