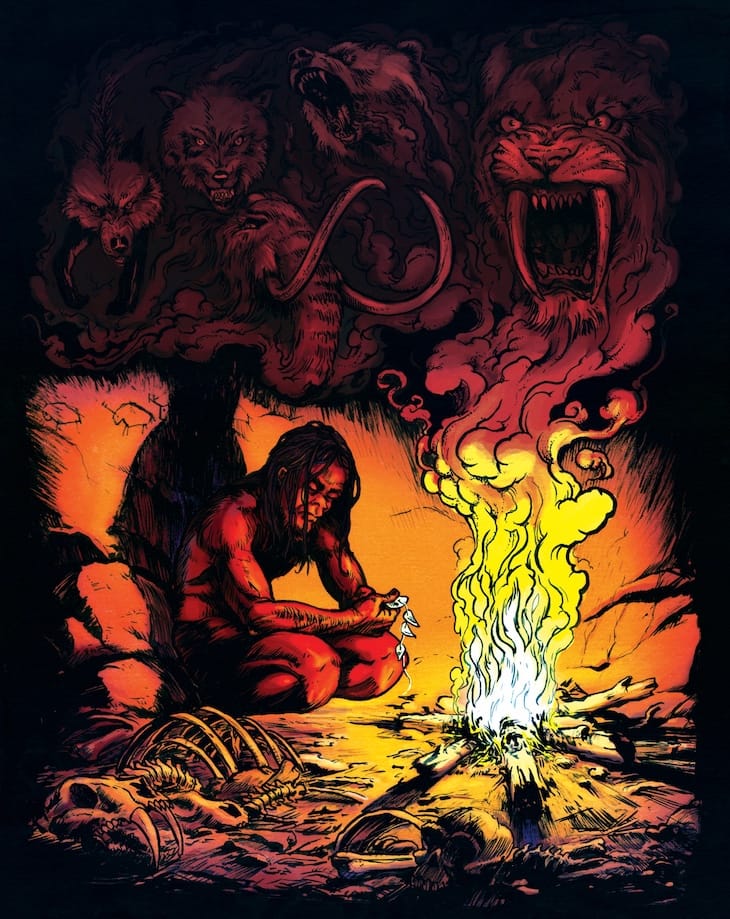 Dipa drove into camp in his battered Land Rover, leaned out the window, and explained in a poker-face-flat voice, as if he were asking to borrow a cup of sugar, that a lion had killed a cow in the nearby village… and would I help him track the lion? His shoulders were wrapped in a red and black checkered cape, as most Samburu men wear—and when he smiled, his two gold teeth glistened while his eyes squinted together just as you’d expect after a lifetime in the African sun.

I grabbed some water and my club and jumped in. “What are we going to do if we find the lion?” I wondered. But that is a cross-cultural question, opaque to me and obvious to Dipa; and I learned long ago that white men ask too many questions.

After a short drive across roadless savanna, Dipa turned off the motor and grabbed his club. With a mixture of curiosity and consternation, I noted he was not carrying a firearm. We found the dead, half-eaten cow and picked up the lion tracks. An hour later, we stumbled across the fresh carcass of a hapless warthog. The lion had already eaten a prodigious amount of cow and was clearly not hungry because it only nibbled on the warthog, but if you’re a lion, you kill when the opportunity arises. And now we were very close to this lion who was most probably napping in the oppressive noon-time heat.

In a recent column here in Mountain Life [Fall 2018], I explained that one of my first lessons in Kenya was that you cannot neutralize a charging lion by bopping it on the forehead with a wooden club. “Nosirie,” Jawas had told me, “You step sideways–quick, leap–and hit the lion on the side of the neck. Right on the backbone–hard. Do you understand?”

As I peered into the bushes, clutching my club, trying to distinguish the yellow-brown form of a sleeping lion from the yellow-brown savanna soil, I felt—as close as I will ever feel—the vulnerability of our Stone Age ancestors who faced the same conditions, daily, that I was facing for this brief moment of time.

Around 75,000 years ago, extreme and prolonged drought brought ecological havoc to East Africa. Despite homo sapiens’ big brains, our tool technology was primitive and we were pushed to the verge of extinction—partially by the shift toward a drier climate but also because we were weaker than a lion, incapable of smelling as well as a hyena, seeing as well as an eagle, or hearing as well as an antelope. From DNA studies, anthropologists estimate that only about 2,000 homo sapiens survived the worst of the drought—small bands that were scattered around the plains, hungry, watchful, just hanging on.

Then ‘something’ happened—a revolution more profound than any we read about in most history books—and the human population started to grow; slowly at first, and then dramatically. What was that ‘something?’ In grade school, I learned that our survival in those long-ago times was based on sudden advances in tool technology. This hypothesis sounds reasonable enough, especially in today’s hyper-technological gizmo-oriented world, where new models of everything from an iPhone to a spoon roll off the assembly lines and into our hands at a rapid pace. But logical or not, this tool-first hypothesis doesn’t match the data in the fossil record.

Between 1992 and 2002, archeologists working in the Blombos Cave in South Africa discovered that approximately 75,000 years ago, Stone Age artists drilled holes in seashells to string them together, probably as some kind of jewelry like a necklace. Alongside the shells, the scientists found pieces of ochre rock that were incised with delicate diamond-shaped patterns, bounded by parallel lines. From this and other discoveries, scientists have learned that the first beginnings of primitive art came before early advances in hunting weapons—the shell necklace preceded the bow and arrow…

Dipa and I never found the lion that day. But if we had tracked it down and it had charged, what would a necklace have done for me? Nothing. So what is the survival value of art? It can only create a vague story, a feeling, something undefinable and indirect. And yet, in some subliminal way, art helped to open our ancestors’ minds and created a spirit of intra-tribal cooperation. Art drew us together and therefore gave us the power to survive.

To put bookends on human history: in the beginning, we were threatened because we were too powerless. Today, humanity is threatened because we are too powerful, too successful, burn too much fuel, and so forth. Is our way forward the same for these widely disparate problems, on the opposite ends of the spectrum? Is there a happy medium between the wooden club and the AK-47, between being too vulnerable and wanting too much? I think there is, by creating a revolution based on our innate joy of music, art, dance, and, yes, play. But apparently, tragically, that seems to be more difficult than it sounds. —ML