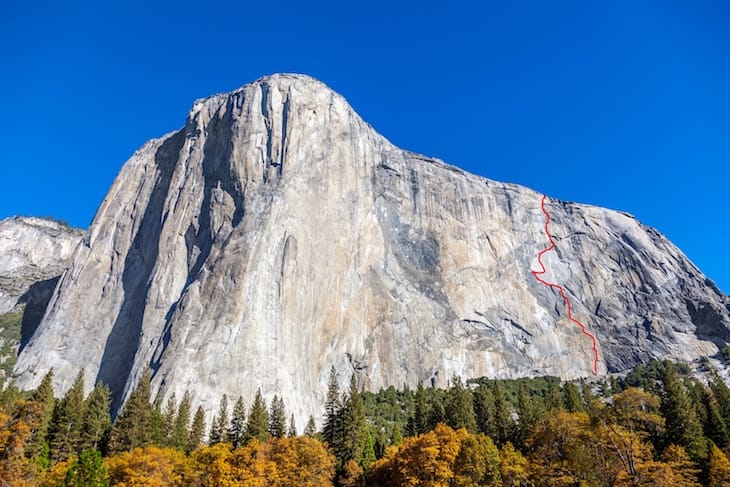 Big wall rock climbing is generally a time-consuming, grueling endeavour that holds little interest for anyone outside the core climbing community. That all changed in 2019 when the film Free Solo, chronicling Alex Honnold’s successful attempt to climb Yosemite’s El Capitan with no ropes or protection—won the Academy Award for Best Documentary.

Suddenly, celebrities were posting climbing gym pics, Honnold became a household name, and everyone was talking about whether climbing the 3000-foot cliff without a rope requires a person be crazy or reckless, or both.

To Squamish resident Russel Mitrovich, who aid climbed the face with no rope back in 1999, the answer is neither. “There was a girl involved,” he laughs. “I think I wanted to impress her.”

Mitrovich, who spent seven seasons climbing in Yosemite (and lived in a super deluxe cave passed down from generations of climbers), adds that he had been talking with his friend (and late climbing legend) Dean Potter about what it would be like to climb El Cap without a rope. On the day he felt it was right however, there was no one else really around.

“I was in tune,” Mitrovich says, “in a good headspace. So I borrowed a 20-metre piece of 8-millimetre rope in case of emergency, grabbed a Snickers bar and a litre of water and started up. I don’t think too many people knew about it because most of the climbers hadn’t shown up for the season yet.”

Mitrovich’s plan was to aid climb the Zodiac route up El Cap. This meant he would place gear—cams, nuts, beaks, hooks, pitons, copperheads, whatever fit—into tiny cracks, on ledges, bumps and depressions then hang on the gear in a sort of stirrup sling and work his way up the route one step at a time.

“I was back cleaning as I went,” he says. “So on the Nipple traverse—it’s way up there in the middle of the route, traversing on a thin seam under a roof—I’d hang off one piton, reach way over and bang in another one, then swing over to that piton, reach back and yank out the first one. That pitch was repeating that for 150 feet.”

Mitrovich says he felt pretty comfortable for most of the route but ran out of water after the Nipple (about 2,000 feet up). “I got the worst leg cramps, couldn’t straighten my leg. I was starting to get worried about a rescue, but it went away after a while. Then I was onto the Black Tower. That was the crux, and the scariest part because it’s just the thinnest gear. Imagine banging a postage stamp into a crack and hanging off it.”

For dicey sections he’d add a third daisy chain (a looped sling attached to point of contact on the rock) for added safety but that 80 per cent of the route was done on “two daisies.” After some testy “blind hooking” along an overhanging lip, Mitrovich mantled the last move and made the summit.

“I topped out and I still had my Snickers bar. It was dusk and there was a guy up there lying in a sleeping bag. He was like ‘where did you come from, where’s your haul bag, your gear?’ He had an extra sleeping bag though, and a beer. So I stayed the night, then came down and met my buddies. They were stunned, I’d climbed El Cap without a rope.”

It turned out Chris McNamaram, the friend Mitrovich had borrowed the rope from, had enlisted another buddy, Tom Evans, and the duo had watched and taken photos from the meadow below. But other than among a few close friends the feat went largely uncelebrated.

“Rock and Ice [magazine] did a small article,” he says, “but I didn’t care about press. I did it for my own reasons, to see if it could be done. I wanted to see if I could be in that headspace for so long, that zone where you are on the edge of either dying or making it. Take the raddest and most dangerous thing you’ve ever done and extend it for 12 hours. I wondered if it was possible.”

After his solo feat, Mitrovich travelled to climb in Baffin Island, Patagonia and the Himalayas, “but I realized I was probably gonna die so I started winding down.”

Now settled in Squamish and working as a stunt rigger in the film industry, Mitrovich says he decided to start talking about his epic climb after seeing the excitement and popularity of Honnold’s free-solo feat. “I want my son to know this is something I did, and something to be proud of. It was a big accomplishment for me and it gave me a self confidence that I’ll carry for the rest of my life. A big part of life is being confident, so I hope I can pass this lesson on to him.”

Mitrovich adds that while it never worked out with the girl, he still uses some of the gear from that iconic first and while solo aid climbing is not a very popular endeavour, it does have a name. “It’s called ‘Mitroviching’.” —ML