Sometimes the only way down is up 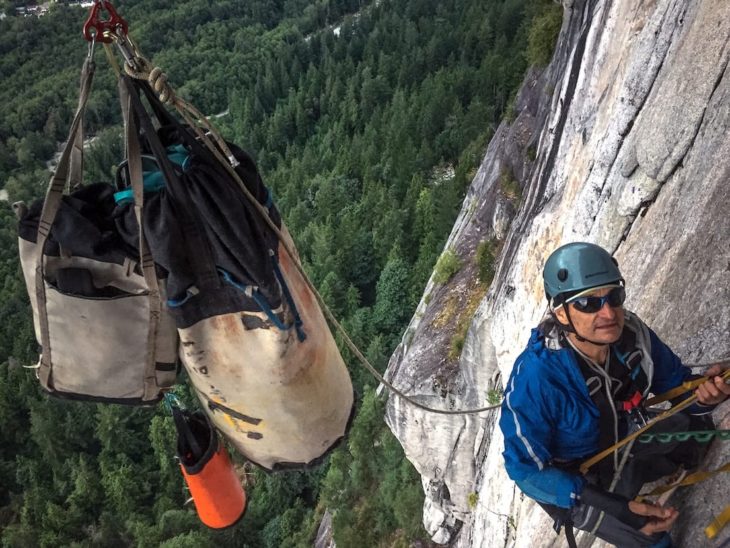 “I don’t think I can do this,” he replies, leaning on the rope a few feet below the hanging belay.

After climbing for 10 hours we have found ourselves halfway up The Sheriff’s Badge, an eight-pitch, 300-metre aid climb on the Stawamus Chief. Below our feet, the wall is slightly overhanging all the way to the black slabs at the base. Above, the rock juts 30’ out into space, totally horizontal. I can feel the weight of the wall and I look longingly at the ground. Perhaps we dreamed too big, thought too highly of ourselves, perhaps this really is more than we can handle. It’s not that we can’t, it’s that I fear what happens if we do.

Retreat, after we reach the headwall, is out of the question; the only way down will be up.

I’m worried about Wayne—I can hear him dry heaving below, puking bile into a one-litre plastic bottle he’d clipped to his harness just for that purpose. The very serious fear that Wayne might die overshadows the reality that we all might die.

We wait for him in in silence. We have headlamps, I feel okay to keep leading, but I need Luke’s help—without it, we need to go down, now, before we go over the big roof. Half an hour later, Wayne creeps into view—elbow, knee and a single hip pad scraping as he ascends the rope. I shout down that Luke has something to say.

“I want to go down,” Luke sheepishly blurts.

Wayne stops his shuffling. His back stiffens, his brows furrow and—in a way that is only his, he shouts back, “I never bail!”

The only way down is up.

The idea of blind-dating on a serious route makes my skin crawl. Humans are complicated creatures and climbing big walls will bring everything to the surface, all that stuff we try so hard to keep hidden. Because of this, I can count the people I will stick my neck out for on one hand: Luke Cormier is one of them. Difficult big wall aid climbing takes time and a whole lot of energy. Often parties take days on routes; each piece of gear must be carefully selected, placed and tested before finally committing your weight to it. Trust is everything. We had agreed to climb with Wayne Willoughby because he was up front about his ability—no bravado, just positive energy.

“So; crazy eh?” Wayne had enthused at the coffee shop earlier that morning. “A 65-year-old climbing The Badge in a day—this is going to be fun!”

A pang of anxiety shot through me—we had been so wrapped up in the logistics of the wall and Wayne’s energy was so high, we had just assumed he was younger. Not that it really mattered. Wayne’s age wasn’t the issue, it was his mobility.

We had left the truck at 8:00 a.m. It took two hours for Luke and Wayne to travel from the car to the wall while I stumbled back and forth, ferrying the heavy bags, becoming conscious of my movements each time I passed Wayne. At a short, steep section on the trail he paused, placed his hiking poles above him, took the exposed tree roots in his hands, stepped his left foot up and pulled himself into balance. Wayne then had to free his hands to manually manoeuver his  right leg into position to climb higher. “Grovelling in style” he’d laughed. I resisted the innate urge to help—Wayne has been moving like this for twice as long as I’ve been alive. He moves with something most people rarely achieve even when given all the physical ability and recreational privilege in the world. Wayne had grace…

…and polio. Wayne had been diagnosed with the disease as a baby and the virus had left him with limited use of his right leg and a host of chronic health problems from the resulting Post Polio Syndrome (PPS). Among the last American generations without access to a vaccine, Wayne is living proof that nobody gets to choose their circumstances, but we do get to choose how we exist within them. He’s climbed 39 big walls in his career, many on Yosemite’s El Capitan, often scaling these monstrous walls in a push, chasing the illustrious in-a-day ascent. He ascends the rock by using mechanical ascenders to climb ropes set by his partners. This time those partners were Luke and I … and Luke wanted to bail.

Wayne’s rallying cry reignited Luke’s desire to see this through. Fifteen hours in and I’m above the roof climbing by headlamp as dusk falls—one move at a time, keep it going. Luke cleans my gear and sets the lines for Wayne. Progress is slow.

The immensity of the Badge was well known to us—the last ‘in-a-day’ attempt was 20 years prior and local wall wizard Chris Geisler had taken a bone-breaking fall when he slipped in mundane terrain, a hazard of moving too quickly on the wall.

I find myself redlined. Free-climbing overhanging rock in my sneakers, my last piece of gear is beyond my headlamp and all I can see is an uninterrupted nylon cord arching into the darkness below, there is nothing to anchor myself to.

Tired and thirsty, I shake my arms out one at a time. I can feel the metallic taste of fear clawing at the back of my throat. I focus on my heart rate, try to buy some time… I shove a cam in a misshapen crack but it falls out. With no other choice in the matter I soon find myself 20 feet higher on a small ledge of dirt, safe again. I continue climbing, trusting Luke and Wayne are okay in the inky darkness below.

It’s light enough to see. I turn off the headlamp, and the soft grays of dawn lead me up an awkward corner, the last pitch of the route. I collapse on Sasquatch Ledge—the top—it is over. For me anyways. I take my time laying out everyone’s sleeping pads and organize what I can. I look longingly at a cold can of chicken soup but I must wait for Luke. Then I lie down on top of my sleeping bag with my back to the wall and the valley spreading out below, heading north into the Coast mountains.

Luke is here. Time slips past and our tired bones sink into the dirt. I almost close my eyes before realizing that Wayne still hasn’t joined us. I roll over a few feet and peer over the edge, following the rope to find him beside a tree. “How you doing Wayne?”

“Doing good!” His reply seems absurd from where I am—it does not look that way. His movements are strained, 600ml of bile hangs from his harness, and his pee bottle is empty. The awkward angle of the final pitch is causing him difficulty, and the right side of his body scrapes up the rock a few inches at a time.

“Where was Wayne when you left him?” I ask Luke.

Wayne arrives, just under 22 hours after we started, looking all of his 65 years. But his eyes, his voice, and his smile belie nothing of his troubles. I think back to the perception of risk, the ability to distinguish real danger and I realize my years of climbing have taught me to wait for truths to reveal themselves rather than cling to expectations. Wayne is here, tired and sore—just like us—and better off for it, just like us.

They say first impressions are most important, and if this were true I might not have agreed to this climb, let alone pressed on when one partner started dry-heaving 60’ off the ground, just under 24 hours ago. Wayne’s situation made me uncomfortable but some part of me kept asking, how could I know what’s best for him? As a young man I was always told the value of patience, but I had never considered the link between patience, humility and understanding. How the old saying that good things come to those who wait was also a lesson to shed the fallacy that if we don’t understand something right now, it’s not worth knowing.

The mountains offer an opportunity to interact with discomfort and it is too easy to glorify those moments when we feel strong and independent. In my formative years, I suffered on a path towards these ideals—mountains were symbols of the good that can come to those who wait, as if all that goodness was something I could attain, not something I now realize is meant to be given away.