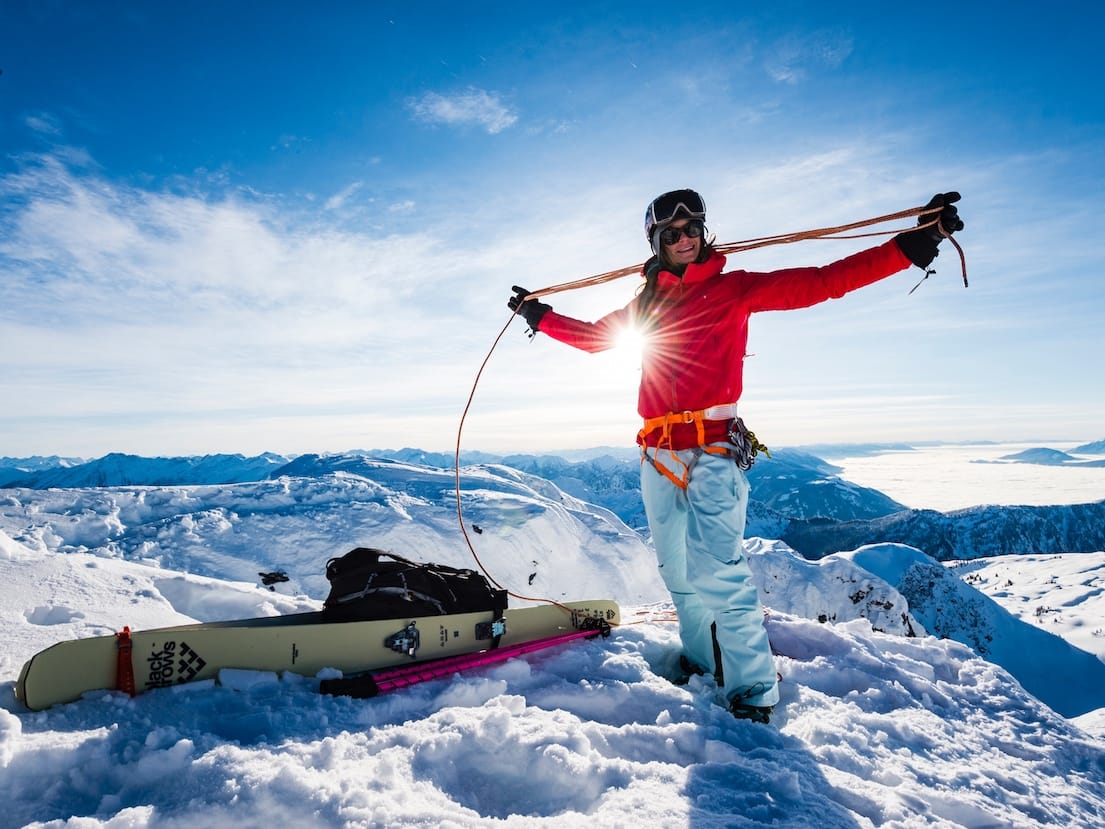 Touted as one of the best young guides in the ski industry, Christina “Lusti” Lustenberger is comfortable in a role that goes back almost to the cradle. Lusti was raised in Invermere, B.C., where her parents inculcated in her a strong passion for the mountains. By age two she was skiing Panorama Resort where her father Peter, a Swiss immigrant, ran the ski shop. She joined the ski-racing program, excelled, and put in six years on the Canadian Alpine Ski Team, achieving top-10 World Cup results and racing Giant Slalom at the 2006 Winter Olympic Games in Turin, Italy. At age 24, after a decade bashing gates and five knee surgeries, Lusti made a change. Turning to her true passion, she quietly became one of the continent’s most accomplished ski mountaineers, logging numerous impressive lines, notably a historic 2011 solo first descent of the south couloir of 3,345-metre Adamant Mountain. She spent this past winter working with Sherpas Cinema on something known only from the hashtag #columbiariverproject. “My love for the mountains has opened up a world of opportunity and incredible experiences,” she says. “Something I hope to be able to do the rest of my life.” —Leslie Anthony

Racer to mountaineer isn’t a typical ski industry path. How did you end up choosing it?

As a young girl, all I ever wanted to be was a ski racer. But once it became this super-strict lifestyle there was no freedom to explore, and I tried to push my coaches and rebel. I liked to race, but didn’t like training inside; dryland was never as interesting as time on snow, so I didn’t see backcountry skiing as ditching out on training. For a change—or complement—I liked walking up mountains. Every time I tore an ACL racing, recovery took about a year, so I started to feel I was missing out on other experiences. I wanted to ski for the rest of my life, not race another two years and keep wrecking myself. Racing also demanded gym time, while the best practice for ski mountaineering is ski mountaineering, and it leaves time for a social life, too.

How do you see your biggest accomplishments?

Soloing the south couloir of Mt. Adamant in 2011 was a big deal, but I returned to the Adamants a couple years ago on a different mission. After playing the waiting game with weather and snow, we managed the first descent on Black Friar, a line that had been on my mind since the 2011 trip. That felt good. I’ve heard people say that despite what I’ve been able to do, I haven’t tapped my full potential. I find that interesting because sure, I’d love to push myself all winter long, but is it sustainable? I take each winter for what it is, training for those days when conditions, weather, partners—and inspiration—line up.

What else has contributed to your success?

Guide training helped me move with more confidence in the mountains and was also a humbling experience, giving me much respect for the guiding community. Guiding slows down the pace, and lets you focus on different aspects of being in the mountains than when skiing with friends, filming, or on expeditions. I’ve also learned that on big trips it’s important to outwork each other. It’s not a competition, more like trying to be that helping step ahead for your partners—boiling water, shovelling snow, meal prep, being five minutes early so your teammates don’t wait outside in the cold. Big objectives take a lot of hard work and everyone contributing goes a long way towards success. // IG: @christinalusti