When Malcolm Sinclair started sending out resumes he was worried. The majority of them were for electrical engineering jobs in Toronto. But he didn’t want to live there. As an avid mountain biker and snowboarder, he wanted a job somewhere he could retain those passions and be more than a weekend warrior. He’d just spent six years at school getting a degree in electrical engineering. He’d gone from Cambrian College in Sudbury, to Lakehead in Thunder Bay. He’d got a taste of small town life; living in places where outdoor sport is a part of everyday life. Not wanting to leave the province because of family, he knew where he wanted to end up; a place where he could snowboard everyday of the week and ride some of the best trails in the province. And Collingwood is about the only town in Ontario where that’s possible.

“When I graduated, I didn’t have much experience so I thought I’d have to take a job in the city,” he says. “The opportunity arose here, and I was like, awesome! I don’t have to live in the city!”

That opportunity was at BTI. So in 2015, Sinclair moved to Collingwood and has been at BTI ever since. And while you’d probably never notice the building that houses BTI, what they’re doing in there is pretty incredible.

And on the factory floor, you’ll find some absolutely massive machines. Vehicles with names like Rockbreakers, Mine Runners, Underground Scalers, with attachments like Hydraulic Pulverizers. And with price tags in the $400,000 realm. With 150 employees, BTI employs four electrical engineers and nine mechanical engineers.

“My tasks typically entail the design and implementation of various electrical control systems,” he says. “In this process I have the opportunity to be very involved in everything from the quotation process to field commissioning of our equipment. It really is the perfect mix of desk work and the opportunity to get up and be involved in the field.”

He’s travelled to Chile and Mexico for work and the opportunity to travel is always present.

But most importantly, the 28-year-old Sinclair has managed to maintain an outdoor lifestyle while still working in the field he studied to be in. He regularly rides after work and on weekends.

“Three Stage and Kolapore are my top two favourite places to ride,” he says. “Then Mansfield in early season. I’ve met a lot of people since moving here and I have a lot of buddies within a two-hour radius that come here a lot.”

And when asked if moving to Collingwood was the right choice, there’s no hesitation. 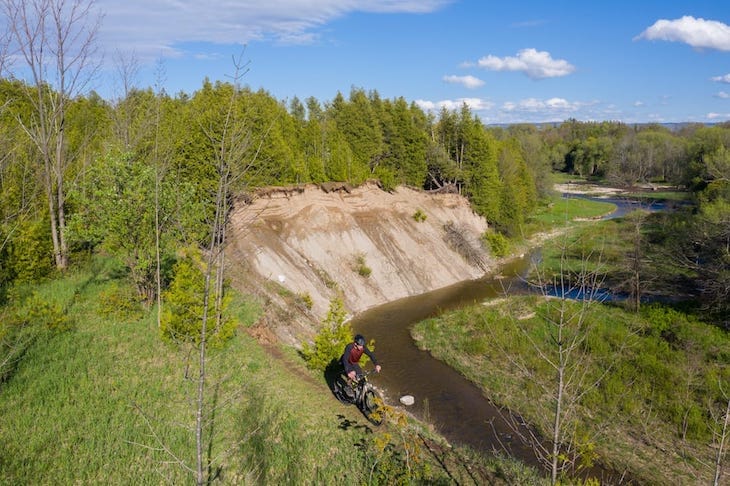 “After four years of being here I feel better than ever about my move,” he says. “My network of friends is continuously growing and although I was pretty familiar with some of what the outdoors here had to offer, I’m still always finding new gems. From the mountain to the water to the trails it really leaves you with no excuses not to pursue your interests.”—ML