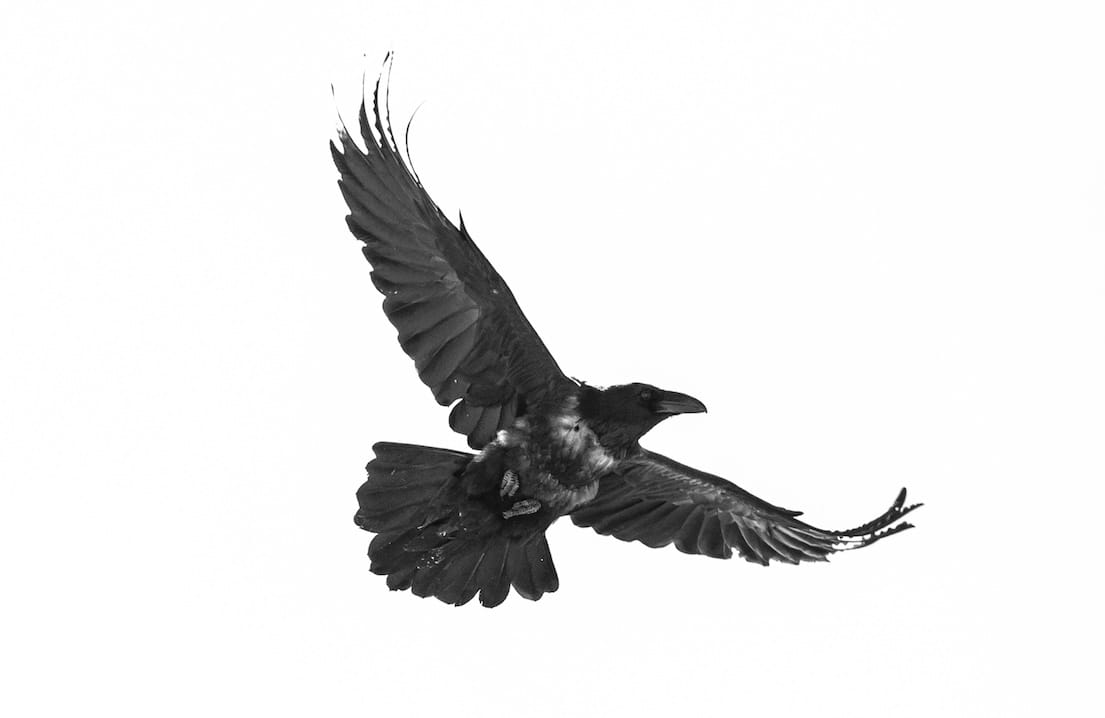 What’s So Special About Ravens?

Depending with which global culture or religion you inquire, the raven is cast as a symbol of life, death, or trickery. Revered but never maligned, the bird’s ubiquitous importance in folk circles—appearing as it does in the history and myths of dozens of countries—is upended only by its impressive range, which includes numerous habitats encircling the Northern Hemisphere as far north as the High Arctic.

Like other northern icons, the raven has adapted not only to latitude but altitude. No surprise then that it also holds special sway in mountain communities worldwide. The raven’s commanding presence and ability to thrive in alpine environments has garnered it a reputation as the reincarnated spirit of hikers, climbers, skiers, and others lost to the mountains. Spend enough time there, and you’ll find ravens’ odd intrusions at the most peaceful of moments to be both mysterious and inspiring. They remind us that we’re not alone in these aeries, while simultaneously leaving us in awe of their resourcefulness, pluck and intelligence.

Aside from ravens’ ability to thrive in challenging habitats, scientists have compiled a litany of impressive traits that further bond these animals to the outdoor community, such as the use of tools and ability to imitate almost any sound, including the human voice. Like primates, ravens also communicate with one another to plan for the future, joining an exclusive club in the biosphere. They not only cooperate effectively among themselves, but work together with other animals—even humans.

Given that the raven and its close relative the crow are both proficient scavengers around human habitations, we often overlook their talents as a force of nature, ranking them lower than more “noble” creatures like wolves, bears or cougars. But the Heiltsuk Nation on British Columbia’s Central Coast has not overlooked their status.

An important mythological figure, stories of “Raven” have been passed down for millennia. Also known as He’mask.as (Real Chief), Raven is a revered and benevolent figure who generally helps people, but at the same time comprises a trickster spirit. Many legends revolve around frivolous or poorly thought out behaviour that, like an intemperate child, gets Raven into trouble. While these cautionary tales remain instructive, the Heiltsuk’s modern relationship with Raven is equally important.

As with other creatures of the forest, the Heiltsuk respectfully observe ravens in order to learn how they speak, use body language, and conduct social dynamics. Cal Humchitt, a Heiltsuk forest technician and archeologist living in Bella Bella, has seen firsthand the raven’s ability to work with other species, and has forged a unique relationship with the birds. Growing up, Bella Bella’s abundant ravens drew a great deal of attention from young Cal. His grandfather instructed him to feed ravens passing through his backyard so they’d know he was wealthy enough to share.

“Ravens often follow us in part to warn other animals of our intrusion, but also just to share lunch,” he says. “I often offer some of my sandwich to them, hoping to gain favour so they’ll warn us if another predator approaches.”

“At times the raven doesn’t accept my food, suggesting he’s eating well as per the season,” notes Cal. “This is vital information, as I’ll know from the raven when to go out fishing or hunting.”

Cal isn’t alone in his unique relationship with the species. It’s also believed that ravens work in concert with coastal wolf populations in B.C., alerting them to the presence of a kill or live food with a signature low croak (as opposed to the crow’s trademark caw, one of many qualities differentiating the two). In return, wolves leave choice meat scraps to gain the ravens’ favour. Such symbiosis is both utilitarian and profound, but not localized.

Much as the Heiltsuk’s relationship with the land and its creatures runs deep, so do mountain communities’ relationships to the peaks. Here, humans spend countless hours climbing or following trails for no other reason than to access the heights. To the outside world, such decision-making is questionable: why hike six hours in the rain simply to walk back the way you came? At the most unpredictable times, however, often when we’re alone atop a mountain, these magical spirit birds will appear to draw similar queries. Why are they here? Why choose to live in such a volatile environment? For ravens, like us, there may be no answer more definitive than because they can.

They appear to want us to know that our seemingly peculiar choices mirror their own, and that whatever symbolism we choose to project on them is, well, possibly mutual. —ML