The Lynch sisters are always on the move. Naturally, it was impossible to nail them both down for a chat this winter leading up to Multiplicity 2019. Being the adventurous sisters they are, Zoya was away in the mountains while Izzy had a free moment, so we sat down to chat with her about her upbringing in the mountains, being a mother and a professional skier, and what it was like living with her younger sister for so many years.-ML

Hi, Izzy! Can you introduce yourself?

My names Izzy Lynch, I live in Revelstoke, BC. I wear many hats. I’m a professional skier, and last year I produced a film with my sister Zoya. I do some work in the production world, I work in marketing, project management. Basically all of it is linked to creative projects or the ski industry.

Since Zoya can’t make it, here’s a test: Describe her in a few sentences.

Zoya is my baby sister—she’s the youngest of four and I’m the oldest. She is a professional photographer who specializes in adventure and outdoor photography. And she’s a creative genius, I think. She is so artistic and has a really amazing eye.

Your parents started a backcountry lodge basically on a whim when you were young. How did that play into you and Zoya’s careers?

My parents built Amiskwi lodge in the early 90’s so we got an early taste of the backcountry. We were up there when we were really young. Basically because of that, we’ve created jobs and lifestyles where we get to be in the mountains as much as possible.

I heard you became a mother recently.

Any plans on getting him into the mountains as young as you did?

We’ve ski toured together a bunch. He’s been up to Amiswki, my parents lodge, 3 or 4 times now, and we spent Christmas at Blanket Glacier Chalet, and he loves skiing. I’ve ski toured with him in the backpack and it might be a bit before he gets on touring skis, but he loves skiing. We hit up the magic carpet this morning.

Where did they find a ski touring setup for you?

We had really terrible setups when we started. I ski raced so I had racing skis with trekkers on them, and alpine boots. And old skins that had been cut down to fit my skis. It was super heavy, but it was all we knew. Getting out touring at that age involved a lot of candy bribes, and my parents had some really good techniques for getting us up the mountain.

Being in the backcountry so much, what did that do for the family dynamic?

It definitely brought us closer together and gave us this awesome environment to connect and spend time together. Being up at Amiswki when we were kids, there were no distractions, no TV and no other kids so we were forced to play together and get creative and get outside a lot. I think it fostered our creative sides as well because we did a lot of colouring and made up plays and we just had to use our imaginations all the time. Now it’s so amazing because it’s the foundation of all of our relationships so family holidays are actually really enjoyable because we have a common love for skiing.

GET YOUR TICKETS TO MULTIPLICITY HERE! 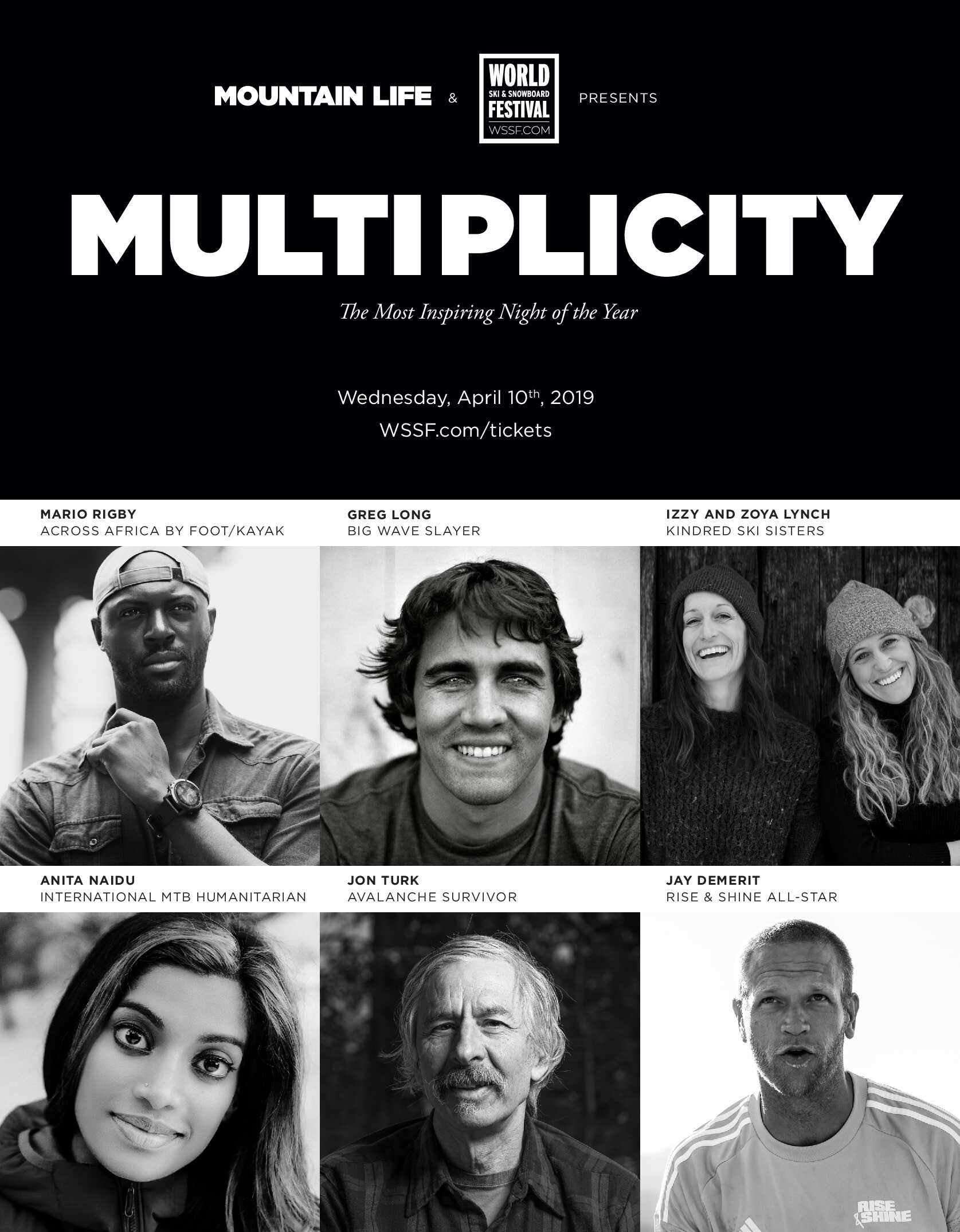 How did you and Zoya get to be so close?

It’s totally due to proximity, so we’ve just had this opportunity to spend tons of time together. Our other siblings are just as fanatical about the outdoors and the mountains as we are. My brother is super into the kayaking and skiing, and our other sister Lucy lives in Toronto and has a background in urban planning, but still really loves the outdoors and is always climbing and canoeing.

I’m sure your life has changed after having Knox. How has that changed your goals as a professional skier?

It’s changed things more than I could even imagine. This is the second winter with Knox. The first winter I was on maternity leave so I had lots of free time to spend with him, and when I wasn’t with him I had lots of time to ski. I went back to a day job life and it is a bit more of a challenging balance, and it’s really changed the amount of time I have to spend out in the mountains. There’s a whole lot more effort that goes into having a few days in the mountains. You have to organize child care and get help. It’s made me appreciate my days out more than ever. I used to have ample time and freedom to be out in the mountains, but it kind of makes it so all the days blend into one. Now, when I do get out and have an amazing day, it feels a lot more powerful.

How does Knox change your perspective on the dangers around your job?

I’m still skiing for Arcteryx and they’ve been amazing and supportive. I think your tolerance for risk is always changing and evolving. As you get older, certain things happen. We lose friends, and every time something big happens like that it makes you re-evaluate your risk tolerance. So, I would say I think twice about going out. I’ve always been pretty conscious but I definitely think more about the consequences of my actions. I don’t think my goals have necessarily changed, but maybe I’m just a bit more conscious of how I am approaching them and when the time is right.

You were at a backcountry lodge when you were a young kid, you moved to Revelstoke right when it opened, you’ve always been a step ahead. Is that a product of your upbringing?

I’ve just been lucky to be in the right place at the right time. My parents kind of stumbled into the Amiskwi Lodge opportunity, and same with moving to Revelstoke. My ski career definitely flourished because of the time I moved to Revy. It has granted me tons of amazing opportunities.

Did you and Zoya live together in Revelstoke?

We did. It was really good for the first few years. We realized after a bit we needed to live separately to have a bit of independence. I think Zoya needed to assert her independence a bit since she was the little sister, haha.

Even though she’s a younger sister has she inspired you? Do you like to think you’ve inspired her as well?

Zoya has totally inspired me. She has worked so hard and forged her own way in the photography world and the ski industry. Not only that, but also building her skill set in the mountains. She’s a very competent and efficient person to have in the backcountry and that’s been all her pushing herself, and it’s really inspiring. I think she would say the same about me—we’ve learned from each other doing what we love to do, pushing our boundaries, and building on our skillset. Because we are both independent contractors, that’s a whole other side of the story as far as building businesses and what we have learned from each other.

Can you give us a tease of what you and Zoya will talk about?

So many people don’t pursue their goals or projects they have because they don’t feel fully qualified, or they haven’t ticked all the boxes. Our talk is going to be about how you don’t need to have every box ticked. You should just go for it, because really amazing things can happen.

Thanks Izzy! Can’t wait to see the show. –ML