The co-owner of the independent film production company Wandering Fever, Dean Leslie is a South African adventure filmmaker. His work has taken him to all seven continents, and he has worked on both award-winning short and feature films, including Pumzi and 12 Mile Stone, and directed music videos for some of South Africa’s top bands and musicians. Since 2011, Leslie has worked on a series of short films for Redbull Media House and helping to establish Salomon Running TV. Leslie directed Kroger’s Kanteen (Mountainfilm 2016), profiling the highest aid station on Colorado’s Hardrock 100 ultramarathon. 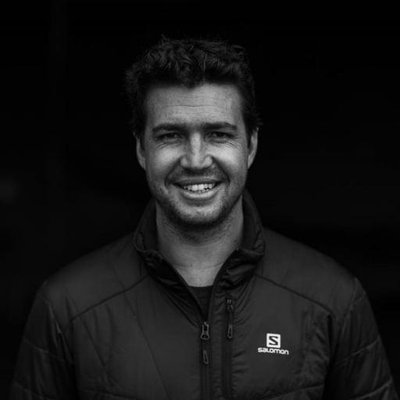 Hey Dean, thanks for taking some time with us.  Where are you from, where do you live now and how’d you get into filmmaking?

I live in Cape Town, South Africa. I was a photographer, did behind the scenes on film sets, and began dabbling in film around when I was 20. And then in terms of adventure films one of my friends from school, Ryan Sandes, started running and telling me about these big long ultra endurance events he was doing.  We started chatting and doing some fun stuff on the side, and he ended up becoming a pro athlete for Redbull. So we just started doing projects, someone saw some stuff and it just kinda took off from there. 10 years later I’ve been predominantly producing running content.

So you didn’t study it?

No I studied animation. Yeah my whole background is in post, so I kinda learned everything working backwards.

What things have you done with Redbull over the years?

In 2013 I did the first project with Redbull.  Ryan and another guy ran across the Southern African Plateau.  They did a 200km run self navigated, self supported which we produced a 30 minute film which went on Redbull TV called Travalien.  And then I was working on a bunch of other projects and got back in touch with Redbull in about 2015 and in the last 3 three years have been working pretty close with the Media House, working pretty close with the Dedicate Series and we’ve done the Great Himalayan Trail project, and a few others.

Yeah in the broader context I’ve been producing trail running content since 2011, before people were producing trail running content. So I’ve got almost 100 films around that subject.  So that’s where the Redbull connection came in when people were shopping around for mountain running stuff and invariably your name pops up. I’ve got a lot of ins in the community I know really well and know all the stories.

So you are here in Vancouver, BC teaching an Adventure Filmmaking workshop for VIMFF.  When teaching classes like that what question do you get the most?

Probably the most common question is how do you do what you do.

Yeah like we want to fast track this stuff.  But the reality is the only way to get someone to pay you to make stuff is to have a body of work behind you.  That’s probably the most common and the other one is what camera do you use. But yeah I think that it’s mostly just people who are starting and don’t understand the complexities behind the process, I wouldn’t um, yeah film is just brutal and takes so much time, so much effort, and you’ve got to have the right motivations before you start or else you’re not going to get too far.

Turning this real for a second.  If you were to be dropped off in Canada right now 2019, 20 years old, zero connections, $2k camera, laptop, nothing else, how would you go about working with film?

It’s 2019, two thousand dollar camera, which is a pretty legit body, what would I do?  I would take my interest and document that. I’m from a surfing background, not a running background, a lot of my influences growing up come from surfing.  So I would head up to the BC coast and make a surf film with some mates and camp out. Honestly the best way to learn is to get your hands dirty, make mistakes, do everything that your not meant to do so you know what you need to do.  Film has so many complexities and so many moving parts that the only real way to learn how to make a film is to go through that whole process. And just see what works for you and see what doesn’t. Just break all the rules, you know I learn most the rules after I made a bunch of films already, the rules come in handy down the line but first you just gotta make stuff.

Yeah, I think people will find that real helpful.  Because I find I get that question a lot, “how do I make it in the film/photo industry?”

Yeah there’s really no excuse now though.  There’s absolutely no excuse. Like 6 years ago you had excuses or even pre 2009 you had excuse.  The cameras were bigger, they were more expensive. You couldn’t shoot on a stills camera.

No I’ll never forget shooting on mini DV’s, encoding and all the time involved.

Yeah I was cutting VHS to VHS.

I luckily never did that!

Yeah I was sitting, stop, pause.  I was learning so much doing that stuff. And now it’s like you can cut a film on your phone that’s legit.  So there’s really excuse, like when people say that, I’m like come on.

I get a lot of people that are set in their ways and been in the industry for a long time and they’re annoyed, legitimate reason, but they’re frustrated about enthusiasts with full time jobs who just want their photo published and don’t care about money driving rates down.  It’s like well yes, understood, but it’s creative competition. You can’t just be an old guy who’s got all the gear, connections and just sit there. Maybe you’re not going to make it and you’re going to get cut, you got to be very creative. It’s kinda neat for filmmaking and photography as a whole.

Yeah totally, photography has really suffered even more so than film.  It’s even happening in film now, but what makes a good film is a good story.  And a good story is not reliant on fancy shots or slow motion or expensive camera gear, it’s just a good story.  And so that becomes your overriding element and you can only make better films. For sure, the technical stuff will come, but if we focus on telling good stories, and the outdoor industry could learn a lot from this, is focus on the story telling rather than a million phantom shots.

Exactly, rather than how big is your budget.  Changing it up here, What’s the best way you can explain the difference between photography and film?

I feel like film is more of a process, with photos it’s easier to capture quite a fleeting moment.  But with film from your initial idea through your execution and delivery you’ve usually gone through months and months of change.  And that’s creative or personal experiences, so films are much more like an average distillation of time over that period for you. It’s not instantaneous, where photography can be, and film is this long process of feelings and emotions and changing your mind.  From the initial vision to the end it’s usually not the same.

It’s just the process, film is a process, it is a long process and usually there’s a lot of creative heads in a single film. To be a director on a film as opposed to a photographer or even a director of photography you’ve got to have quite a strong singular vision and be able to dissect the information coming in and the different opinions and take what’s needed and throw away what’s not necessary with your vision.  Where as photography it is snap, you got it.

Do you plan on being a filmmaker forever or do you have other dreams or desires that might take precedent at some point?

Yeah so it’s an interesting question.  Because after Lessons from the Edge I was almost willing to quit.  I’ve been in a few experiences shooting film where the risks haven’t been acceptable for making a film where you have a lot of 50/50 calls.  I love making a film but I don’t want to die making a film. So yeah I’m ok now with not making film for the rest of my life. I love making stuff, and film is so complex that can’t ever master it so you’ll spend your whole life learning.  And I really like that and I really value that in the process. But I could also see myself creating as much value carving a wooden surfboard.

Is that what’s next?

Oh I don’t know, I made one at home recently in just a lathe so I’m kinda into it at the moment.  But it’s a tough way to make money. But yeah I just, nothing lasts forever and I think it makes you not take things for granted and really appreciate the things that you have.  I do love making film and I do really love being outside. But I don’t know what’s going to happen tomorrow.