While never full time “ski bums”, we had very little money and skiing has always been relatively expensive. So, on one side there was the challenge of deep snow and bumps. On the other side was thrift, which is never voluntary. Near Salt Lake City, Alta hosts deep snow with slopes steep enough to make a fabulous legend. The “Powder Bowls” of Alta were reached with the world’s second chairlift, which was built in 1938. The first was invented in Sun Valley in 1936.

In the 1960s, only about 20 percent of the skiers at Alta could handle the deep and for those who could it would take three days to carve up all the fresh stuff. And then it would snow again. Always deep and light, we called it “desert snow”. Nowadays, new snow on any mountain will be carved up in only a couple of hours, but the food services are outstanding. That’s up top as well as in the valley. And for any budget.

Back in the day, we stayed at low-priced motels and bought the cheapest groceries possible. One would go through a cafeteria line, pour a mug of hot water, put in some ketchup, one of the little things of milk and crumble in a package of crackers. As a French chef would say – “voila” – hot cream of tomato soup.

Carbohydrates were needed for energy and a “filler”. On the way to the mountain there was a donut factory and at the retail door, there would be boxes of rejects. We fondly called them “cripples” and a good top up would last for most of the day. Inexpensive, but drinkable wine, provided the evening entertainment. At $1.75, these were half the cost of a lift ticket. Famous for snow, Alta has avalanche problems. There were few places where accommodation and bars could be built, so there was little of the night life usually enjoyed in ski villages.

In Idaho, Sun Valley provided all, repeat all, of the amenities. It lives up to its name in weather and provides some of the best-groomed skiing in the world. On a budget or not, the village is marvelous. Picturesque and loaded with fashion. Going from the powder bowls of Alta to the fleshpots of Sun Valley was a “night and day” transition. Both in the style of skiing and in entertainments.

Particularly some years later when budgets had advanced beyond thrifty. Chicken wings and salad in the Roundhouse at the top of the lift system were outstanding for lunch, especially compared to a small bag of broken donuts.

Sun Valley gets sun and that implies moderate amounts of snow, particularly early in the season.

This was the sad condition going into one New Year. And a ski resort without snow has its own type of gloom, which hangs like a clinging fog – everywhere.

All day and all night, but one needs to go out so we booked at the Trail Creek Cabin. This is a rather nice restaurant and one can get to it by horse and sleigh. Not on that evening, but our window table had a nice view of the long brown grass on the banks of the creek. Inspired by the pall, the servers were at their best. 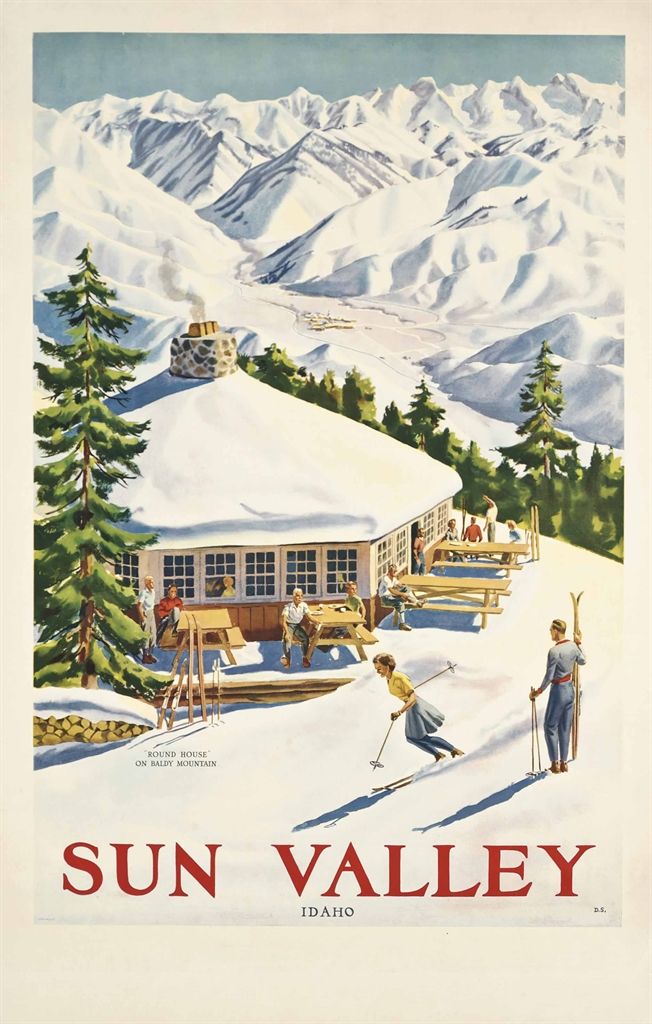 Hoping for our own inspiration, we started with a modest champagne, which picked us up a little. After careful study, I chose the rack of lamb with mustard and herb coating which was outstanding. Others at the table enjoyed their dishes as well. A rather nice Pinot Noir from the Russian River in California was helping, but in looking around the mood was generally downcast. The view of the old grass was not comforting but it was compelling to look out at the well-lit scene. And then, and it took only a glance, snowflakes were coming down. Not just ordinary ones, but huge and the air was thick with them.

In an instant, the thrill of discovery went around the room as did orders for more wine. We reached for a Margaux, which was slowly savored. In those days, it was only about twenty times the cost of a lift ticket, now it’s some seventy times. Up on Mount Baldy, more than a foot of fresh snow and sunshine provided one of the great days of skiing. Sigh.