Let’s not kid ourselves—outdoor adventure is an extraction industry. It’s nowhere near as bad for the world as Dollar Stores, gas fracking, industrial mining tailings or clear cutting old growth, but the fact remains that most of us take more than we give.

Whether its burning fossil fuels in sleds and helis, upgrading perfectly good gear each year to appease sponsors and style, or venturing into First Nations territory to shred lines and dip a toe in their culture before chasing the next storm to somewhere else—the question needs to be asked: are we doing enough?

As an outdoor cinematographer, I feel incredible lucky—my job is to spend time outside in beautiful locations—but it’s always struck me as a bit strange how disconnected I’ve been from the very people and issues tied to the places I’ve visited. Last winter, working on a film project called The Radicals, I went deeper into the story behind an area I had passed over often—the Bridge River Valley. 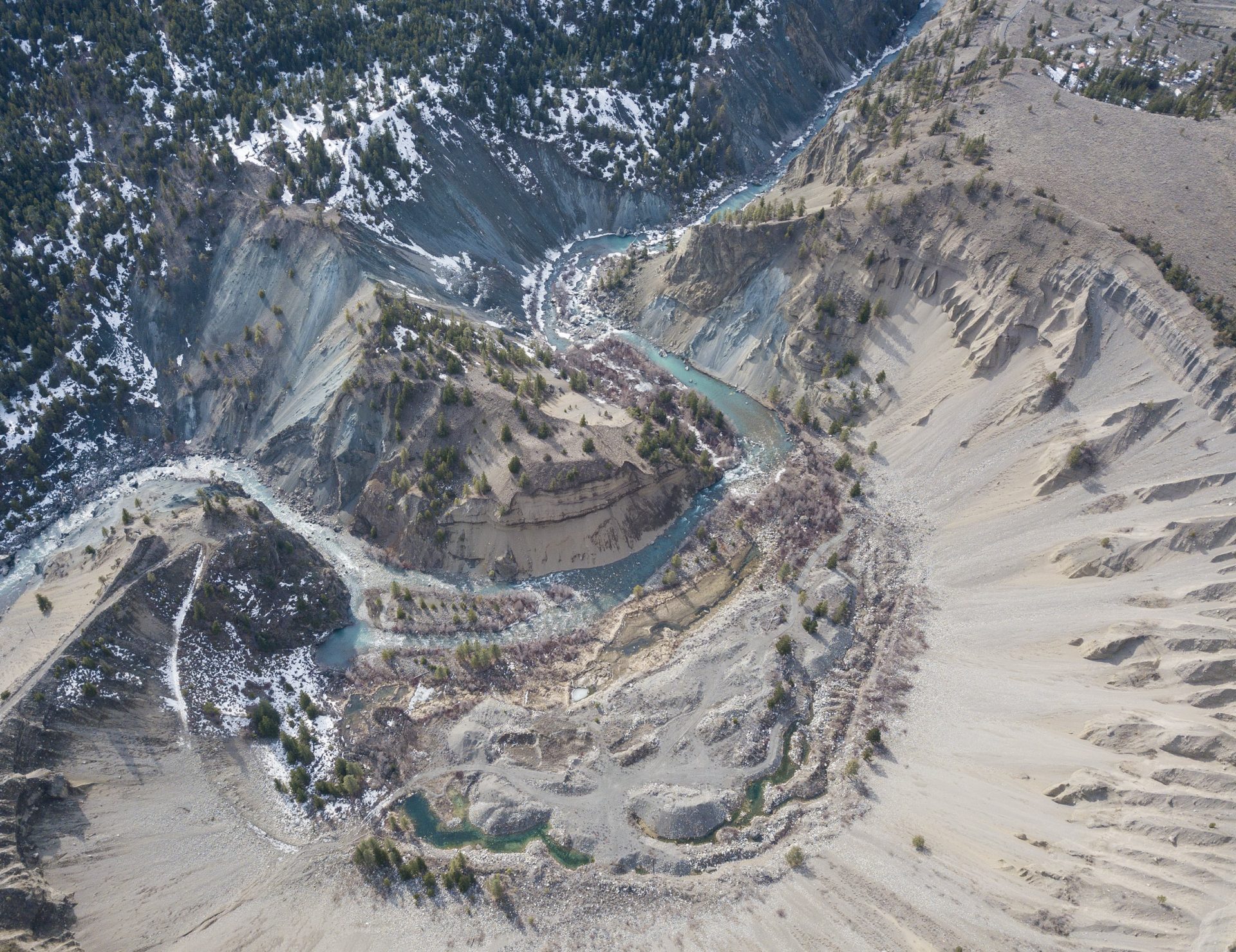 To me, the Bridge River Valley has always been just a place we pass through on our way to the backcountry playground of Bralorne. But it’s also home to the Xwisten Nation, a small community outside of Lillooet, BC (just an hour and a half north of Whistler). The Xwisten have inhabited the region for more than 10,000 years and the river has always sustained their culture, primarily through the migrations of wild Pacific salmon.

Little did I know those salmon—three species—are under threat of extinction in the Bridge River by the hydroelectric power I had always considered ‘green energy.’ Back in the 1950s, BC Hydro dammed the river in two places, flooding it to create water reservoirs that then travel through pipes burrowing two kilometres through a mountain into a third lake where the power is generated.

The flooded areas destroyed nearly 70 per cent of the river and surrounding riverbank. That in itself is worrying for salmon stocks, but the Xwisten have chosen to focus on the remaining portions of the river, working and negotiating with BC Hydro over the past 20 years to ensure that water flows being released into what’s left of the Bridge River remain at levels that safely allow salmon return to the river and spawn each year.

Unfortunately, as these things often go, BC Hydro broke the water level agreements and began releasing catastrophic amounts of water out of the lower dam. Nearly all suitable fish-rearing habitats were wiped out.

“We’re supposed to be co-managing the system, says Xwisten leader Bradley Jack. “To me, it really failed in that aspect.”

Taking matters into their own hands, the Xwisten employed the services of Coldstream Ecology, an environmental research and consulting company, to help identify and create suitable fish-rearing habitats that will provide places for fish to escape the high flows.

“Unfortunately, since they’ve started having to spill the water in the summer, we’re seeing the population decline by 70 to 80 per cent,” says lead biologist Alyson McHugh. “We are very concerned that these three species of Pacific salmon may not be in this river valley in, say, five years’ time.”

McHugh adds that the focus on river restoration efforts might be the only thing that can prevent an extinction event in the Bridge River. The effects of such a loss would spiral far beyond the Xwisten community. The area’s wildlife, forests and vegetation rely on the nutrients of spawning salmon, and a barren salmon river means many less salmon spawning and returning to the ocean to sustain that ecosystem (and commercial fisheries).

Professional snowboarder Marie-France Roy spent a lot of time with the Xwisten community during filming for The Radicals. She spent a day on the Bridge River helping McHugh and members of the Xwisten shovel out a side cannel/refuge area for juvenile salmon (and other species such as rainbow trout and Dolly Varden).

“I used to think hydro was a somewhat better option, like the green way to generate power,” Roy says. “I’ve come to realize it’s not the case at all. Still, the majority of the public thinks hydropower is green. The main takeaways for me are that we need to respect First Nations rights and implement strict ecological and social accountability measures to any development, energy or resource extraction project.”

After learning about the issues facing the watershed downstream, Roy and the rest of the crew of The Radicals headed into the mountains and glaciers that feed the Bridge River watershed to lay down some serious snowboard tracks—reinforcing that connection between the snow and ice we’d all ridden numerous times before and what was happening downstream.

“It sure does make you appreciate snowboarding in these mountains a lot more,” Roy says. “We take so much for granted. The mountains, the rivers, the forests, the oceans and the soil—it is all connected, and it gives us everything. I think we all need to make it a priority to protect and restore the land in exchange for what we extract.”

After a winter of filming The Radicals and witnessing some of BC’s First Nations share their communities, culture and challenges with forward-thinking athletes like Roy, it’s become apparent to me that a little bit of engagement goes a long way.

“I believe our most valuable tool is communication,” Roy says. “The first step to change in any movement is awareness. We need to listen and talk to each other to find solutions towards change. Then we all need to stand up and take action. Every relationship has a responsibility.”