My current life only exists because of social media. I use it to make money, support the lifestyle I want to live and it has frequently served as the spark that has pushed me down paths I would have otherwise never known about. Over the last 8 years it has been one of the tools that I have used to change myself from a 300lb couch potato to someone who now knows how to backpack, navigate, ski, ice climb… basically look out the window at the mountains and get after it. So I’m aware that the opinion that follows is biased.

Social media is not ruining the outdoors. It’s not blowing up your spot. It’s not the devil incarnate out to ruin your winter of entire mountain ranges filled with untracked powder snow.

The problem is we sold fitness and active outdoor lifestyles as a desirable way of life to the west and then we gave ourselves the tools to go get it. Remember fitness is a recent invention, the first Health Club chains only began to open in the 1960’s. Up until as recently as 1972 it was illegal for women to run in the Boston Marathon, it was believed that women were physiologically incapable of running 26.2 miles. That was 1972.

Then as our diets exploded with fat-free, sugar-full cardboard our waistlines began to explode in North America. Rather than alter the chain of food, we altered the rate at which we burned energy by selling an active lifestyle that would burn off all these cheap, energy rich foods that we were now consuming.

Enter the neon spandex of the 80’s, fitness VHS’s and we were off to the races on our treadmills.

Fast forward a few decades and here we are. We have a population that sees fitness outdoors as a desirable quality. We won! Why are we doing it? Who cares! Just get after it, move your body up and down that mountain, apres at the bar, rinse, repeat.

I often jest that in outdoor culture the greeting du jour is no longer “Hello” but rather “What have you been doing?” because we always need to be doing something right?

So now imagine you have this pyramid diagram, like the food pyramid, but that diagram ends at the top with a throng of fresh faced AST-1 ski-tour beginners tomahawking down the guts of your favourite powder stash and ruining your half-day ski tour away from the kids and the lift lines of Whistler.

At the bottom of that pyramid you have “Motivation”. The next level is “Means”, these beginners have their leased Tacoma or co-op car filled with all the latest cheap, reliable and light ski touring equipment ready to drive to your secret stash. They have all their avalanche gear but do they all know how to use it? Who knows.

The final tier is “Information”, they have a printed guidebook telling them about your spot and they have forums detailing other experiences in and around that spot.

They have GPS tracks and coordinates and multiple GPS devices with them, whether it be their PLB that has replaced the 10 Essentials in their pack, their GPS watch or the GPS contained within all of their smartphones. They also have all the apps to view the tracks from others that were unknowingly uploaded and made public for everyone to see and use.

Finally, they have an Instagram glory shot showing just how deep the powder is right now. Sure the image could be 5 years old but it was posted today so they’re just going to send it!

Are there huge problems with this diagram? Sure, I’m not arguing that. I don’t believe anyone imagined the world we’d be in today back in the 80’s when this outdoor fitness train began to leave the station. The issue is that there should be an “Education” step in the pyramid before “Information”.

The internet age has given us the “What” without first educating us on the “How and Why”. The issue is that wisdom is assumed when we distribute knowledge in our era.  Prior to this, a real breathing human needed to dispense the information and test for wisdom in the recipient along the way.

This chain has been broken and the floodgates have been opened. We can all see it out there in the mountains. People following their phones into places they don’t yet know are dangerous. We blame the visible tip of this iceberg, the social media glory shots, but the issue goes much deeper and isn’t going away anytime soon.

The freshies are still out there, you just need to go deeper to find them, and maybe turn off that tracking app next time.  That is if you don’t want to be standing at the top of your favourite line looking down at new skiers coming up your old descent tracks right underneath all those overhead hazards you thought were common sense for everyone to avoid. 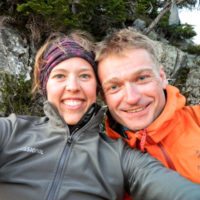 Leigh and Spring McClurg are storytellers, outdoorsy nuts, photographers, happy campers, wanderers and sometimes adrenalin seekers. They believe in moving softly across the Earth with a respect for wild places and their future protection. They’re driven by curiosity and personal growth and feel all warm and fuzzy when they stand on top of a new Mountain summit with friends.