June 28, 2011, I wrote in my journal: When you’re trying to drag a 250-pound boat over a dune of ice and snow, and you’re sinking crotch deep into frigid slush, don’t try to preserve your dignity. Dignity is a foreign concept from another cosmos. Crawl.

Erik Boomer and I were on the sea ice along the north coast of Ellesmere Island, about halfway to our goal of circumnavigation. When you’re crawling through daiquiri-slush ice water with 750 miles to go, you could think bad thoughts if you wanted to. But that’s not good style because bad thoughts can lead to giving up, and giving up can lead to dying. And that’s bad style. Yeah, I know that Scott and so many other Polar explorers eventually reached their limits, wrote inspiring notes in their journals, lay down in their sleeping bags, and gently passed over to the Other Side. Well, they faced harsher conditions than this and their gear wasn’t as good. So for now, I embrace the crawl. 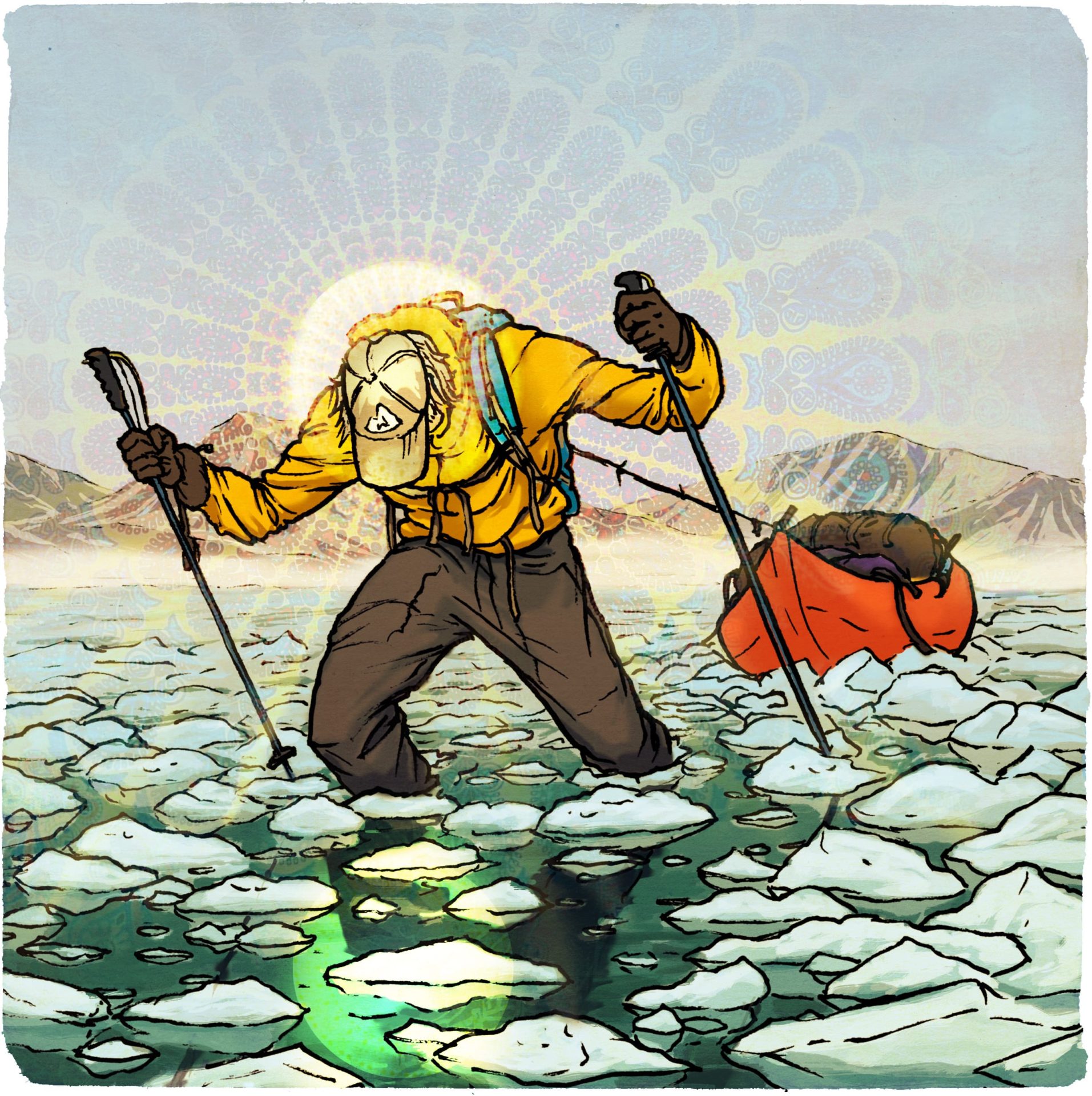 The sea ice smoothed out enough so we gradually straightened and stood upright, like those sequences of human evolution from the knuckle-walking ape to the modern business man with an alligator-skin briefcase. But walking had its own problems, because the skin was worn off my little toe and the meat was scrubbed away halfway to the bone.

July 2, 2011: “I make a conscious decision today not to pretend that I am above the pain. Just suffer. Endure. I am good at enduring; I’ve done it before. Count the miles. Open your heart to this pain. Accept it. Embrace it. My only rule is not to get so grumpy that I say something unpleasant to Boomer that I would later regret and have to apologize for. I’ve done that already and don’t need to repeat it.”

In many sports, if you screw up, you could die in the following five seconds; but we were on flat ice and no worries–we had the next five seconds solidly sewn up. The first of the Four Noble Truths in Buddhism starts with the observation that in life, pain is unavoidable. No one escapes this reality. But suffering, which is an emotional response to pain, is a decision we allow ourselves to make, and is absolutely and unequivocally avoidable.

I’m not a Buddhist acolyte or scholar. But, from my own experience, suffering occurs when that pesky think-too-much-know-it-all brain takes a simple event—which started out maybe slightly negative, or maybe even positive or neutral—it doesn’t matter—and twists that event up into knots, invents side-plots and intrigue, runs it around and around in feedback loops, like a puppy chasing its tail, until it grows, explodes, matures, overruns the castle, and emerges triumphant as true misery. Suffering. We’ve all done it. But out there on the ice, there is no room for that bullshit. No energy. Life is on too thin a line to allow the brain to indulge in its favorite pastime—the luxury of extraneous emotional misery. So a sore toe is just a sore toe. It hurts. Nothing more and nothing less. So simple. So liberating.

In his groundbreaking book, Behave: The Biology of Humans at Our Best and Worst, Stanford neurobiologist Robert Sapolsky writes that in our Paleolithic past (or while crawling across the icepack), we had lives of privation with occasional reward. But, within that privation, our bodies excreted more dopamine (a hormone associated with pleasure) than when we are constantly rewarded with luxuries.

I was skinning up Fish Bowl ridge the other day. The snow was crusty, it was way-cold, and the sun was setting. Why did my pals insist on another run, in marginal conditions, in the dark? Okay, yup, I was feeling distinctly grumpy, but for one-more-time in a lifetime of one-more-times, trying not to complain out loud. If some wise-ass had lectured me that I was actually full of dopamine, happy as a clam, like an 18-year-old dancing the night away on the party drug, Ecstasy, my grumpiness would have spilled out over the top, into some choice words. No, I wasn’t happy–that’s a cheap emotion, easy-come-easy-go, like chaff on the surface. The word ecstasy – the real kind not the party drug – is derived, in part, from the Latin extasis, for “terror.” Of all the many definitions of ecstasy, one that seems to fit is: “It is a subjective experience of total involvement.” Escape from everything, especially myself. The next five seconds are a slam-dunk: all I have to do is put one ski in front of the other, and not complain out loud.

Jon Turk is a skier from Fernie, BC. This story was adapted from a section of his last book, Crocodiles and Ice.