Every year some of us look forward to fall and winter.  Tacky single track, no tourists, days slowing down and cozy evenings with friends, hunting… the list goes on.  But do you behave differently now that there might be an extra dose of bullets in the air?

Just last month in France a mountain biker was struck by a stray bullet from a nearby hunting party.  The biker was killed while the hunter was admitted to the hospital in a state of shock.  Does this ever cross your mind while out on a ride?  Are you aware of nearby areas that are actively hunted?

As a little tour-de-rifle, we’ll look at some past incidents and how to avoid gettin’ shot.

“I turned my head and these hunters were right there. I was terrified,” Soroka said. Two camouflaged hunters hiding behind a tree had wild turkeys in their sights and waited quietly for the hikers to pass before taking their shot.

Lory State Park ranger Dustin Childress said. “Most of the time, no, you won’t cross paths with a hunter. … But, being a metro, Front Range State Park, I’m surprised we don’t have more issues.”

When authorities are surprised there are not more accidental shootings, perhaps it’s time to reevaluate how your park is being used. 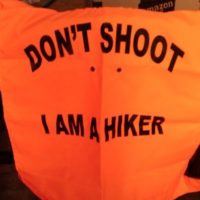 A 14-year-old is being tried with manslaughter after killing a hiker with his stray bullet.  Currently, people under 18 years old are not required to accompany an adult while hunting in Washington State.  Waaaahhh??

Pamela Almi was shot from a distance of 120 yards while she was on a marked trail.  The 14-year-old boy said he thought she was a bear.  The boy and his 16-year-old brother were dropped off by their grandfather.

“We have tried all different kinds of ideas to educate people,” Snohomish County sheriff’s Deputy Greg Rasar said, “but none of them were idiot-proof or bulletproof … it was just a matter of time until somebody was accidentally shot.”  Hmm Sherif Rasar, besides making punny jokes at the expense of the dead hiker perhaps you could start with mandating that minors must be accompanied by an adult?

Rasar continues, “Forest Service personnel don’t like to make judgments about what kind of recreational uses is acceptable. The land is there for people to enjoy and use and protect”.

Sorry, what?  Last time I checked they were making judgements whether I park legally, paid my camping fees, and make sure I don’t throw litter into the outhouse.  But making sure hiker’s aren’t shot by hunters?  We “don’t like to make judgments about what kind of recreational use is acceptable.”  Next time I’m on Washington Forest Service land I’ll just remind them I like to recreate freely without worrying about fees and regulations impacting my outdoor experience.

Lesson: Avoid the entire State of Washington in in hunting season, and if you see a minor with a gun, well, it’s probably too late. 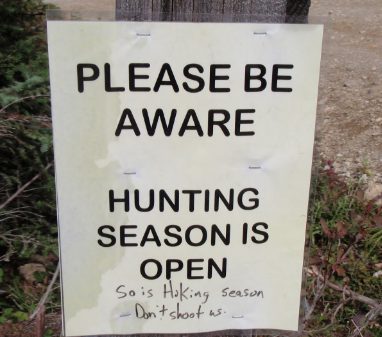 “According to reports in the local press the hunter was alerted by the barking of his dog. He turned to see a shadow moving through the bushes and pulled the trigger.”  This literally gives me chills, the poor man had no chance.

There are much worse ways to go of course, at least his friends will retell this tale at all their bridge games for the next decade.  Apparently, France is the only country in Europe where you can hunt all year round, and because of this they are marred by many hunting accidents year round.

Then of course there are the American politicians.  Always got to watch out for them.

Lesson:  If a Republican invites you on a friendly Qual hunt, politely decline.