The four-year-old Inuit kid rolls up to us on an adult-sized snowmobile, his hands high up on the bars like he’s riding a Harley Davidson chopper. Twenty minutes earlier, my buddy John and I had been speaking with the kid’s grandfather at their house in the hamlet of Qikiqtuarjuaq. We were picking up a parcel of food we’d sent ahead and the boy had pointed at a Skidoo in front of their home and said, “Mine.” We gave a patronizing laugh, but soon enough learned it was indeed his as he rolled into our camp on the sea ice to show off his ride. They raise their children differently in ‘Qik’.

The advances of science and technology have radically changed the North. Adaptation is key to the success of any species, human or otherwise, and the Inuit have had to adapt to the advances of our modern world perhaps more quickly than any group of people on earth. As recently as the 1970s, they lived nomadically in skin tents and igloos, completely in rhythm with the land. Everything they needed to feed, clothe and equip themselves in order to survive the rigours of the Arctic came from seals and other prey. It was a hard life, so the enticements of living in a permanent settlement with easy access to food and medical aid were too great to resist.

Today the Inuit straddle the ancient and the modern, isolated by geography in fly-in communities like Qik, while at the same time connected to the outside world by technology. You can see kids here head-down in their cellphones like Vancouver hipsters, but also find yourself in someone’s kitchen as they butcher a beluga and divvy up the muktuk (blubber) to members of their family with everyone speaking the traditional Inuktitut language. Most northerners may no longer be able to build a kayak and spear a walrus like their forefathers could, but why should they when a motorboat and rifle make the task so much easier?

The next morning, Dave (the third member of our party) flies into Qik, the three of us finally uniting after a milk run of plane connections from Vancouver and Calgary. Our mission here is a 230-kilometre town-to-town, sea-to-sea crossing of Baffin Island via the Coronation Glacier, Penny Ice Cap, and Akshayuk Pass. Most of our time will be spent in Auyuittuq National Park. Auyuittuq means “The Land that Never Melts,” and this frozen world will be our home for the next two weeks.

We notice fresh tracks in the snow, passing only 100 metres from where we slept on the sea ice the second night of our traverse. The monstrous polar bear tracks come out from Coronation Fjord, which is exactly where we’re headed to gain access to the glaciers of Auyuittuq. The end of April is an active time of year for the bears, as females emerge from their inland dens and head out to the frozen sea with their cubs to hunt for the abundant ringed seals in the area. The tracks of this particular polar bear–nanook in Inuktitut–is most likely a lone male as there are no cub tracks to be seen.

Back in Qik, days earlier, I’d walked by a young boy joyfully swinging on a beam beside a gigantic white hide hung to dry. The sight would likely elicit a PETA protest anywhere else but here in the North a strung-up pelt is as common as laundry on a clothesline. The Inuit have been harvesting polar bears for millennia, although nowadays each community has a limited quota of bears they can hunt. They still use every part of the animal for food while also bringing in crucial money to the community by selling the fur to folks in the south.

In any case, global warming and melting polar ice is a far greater threat to polar bear populations than the Inuit are. Dave is a bear biologist who works in Banff National Park. He also moonlights as an interpreter during the November polar bear-watching season in Churchill, Manitoba. He tells us these roaming bears often work the edges of the fjords, searching for hollows in the fractured ice for easy-pickings seal pups that have been hidden away while parents fish. As the ice disappears, so do the bears’ hunting areas and food sources.

Though the fella who made tracks through our former camp passed by us peacefully, I’m still glad we’re sleeping inside a perimeter fence, armed with 12-gauge blanks designed to alert us and hopefully scare away any curious beasts that may wander too close. Having a bit more seal-like fat on their bodies than I do, I’m reassured that a nanook would select Dave or John as a meal over me anyways.

The shattered wall of the Coronation Glacier’s toe rises 200 feet straight up from the frozen sea. It’s one of the crux points of our journey–in order to get on top and continue to the Penny Ice Cap, we need to find a route up and around this behemoth with our loaded pulks (gear sleds we tow behind us). A lumpy band of moraine along the north edge looks like our best bet. Our first attempt involves removing our skis and trying to walk up while hauling our sleds, but after about 30 metres of repeatedly punching crotch-deep through snow-hidden holes between rock debris, we settle on lightening the loads, putting our skis back on, and shuttling back and forth.

A couple hours later we’re atop the toe. The glacier is framed by dark walls, swooping in a flowing, alabaster line to its junction with the Penny Ice Cap somewhere out of sight. We have to be careful in these first kilometres–a few years ago, an ill-prepared skier (no rope) fell into one of the crevasses along this same edge. Injured and cold, he had to wait a couple of days in the chasm before being extracted by local Inuit fetched by his partner. I imagine the locals who helped that day shaking their heads, wondering what these “tourists” were doing way up here.

The danger of falling into a crevasse is one thing, but from an Inuit perspective the fact that no game exists in this windswept zone of rock and ice makes it a very impractical place to be. Why go up on a glacier where there’s no hunting? If they can’t harvest “country food” in an area, they see no point in going there. The seal, narwhal and polar bears hang out on the sea ice, not up here. However, the three of us are travelers, not hunters. We seek out the new, the fresh, the wild–and there’s no place fresher and wilder than this raked and raw terrain.

I wake up to our tent wall flattened against my knees and pressing over Dave and John’s faces. It was dead calm when we set camp halfway up the Coronation. But around 3:00 a.m. the windstorm hit, and it hit hard. John and I lose the ubiquitous rock-paper-scissors match to Dave, who remains inside as ballast while we venture out into the icy blast and eternal spring light. We work quickly, fingers numbing in the minus 30 degrees Celcius wind chill. We anchor guy lines to shovels, snow stakes, and sleds until the tent stands firm again and we can scramble back inside with hopes of returning to dreamland. Dave grins at us when we step back inside. “What took you guys so long?” he asks, then proceeds to fill his pee bottle in front of us. As with the Inuit families of yore living in igloos, no privacy exists in this tent.

The next day, we take turns breaking trail, fighting through pinning headwinds to top out on our high point on the Penny Ice Cap. Named after William Penny, a whaling captain from Scotland who pioneered over-wintering with native Inuit in the area during the 19th century, the expansive ice field stretches away from us forever to the north. There’s a brief pause for a photo, but not much else as the biting wind reminds us that movement is paramount to staying warm. From here it’s all downhill to Akshayuk Pass and we ski onward with the help of gravity for the first time in nine days and 115 kilometres.

With blue skies and good spirits, we drop through a slot in the Baffin Mountains that leads from the Penny Ice Cap to the Turner Glacier, our pulks gliding easily over a skiff of wind-drifted snow. As we flatten out onto the Turner, we’re stunned by views of the backside of Mount Asgard. The twin, flat-topped summit is aptly named after the home of the gods in Norse mythology. Thousand-foot walls gleam in the dipping sun and it’s easy to imagine a few deities kicking back and looking down upon the earth from up there.

All three of us come to a full stop and stare slack-jawed for a few minutes. The scale is mind-boggling, like something crafted for the wistful fantasy of a Wes Anderson film–it hardly seems real. We want to linger for the evening and bask in the mountain’s splendour, so we set up camp right at the base. Over freeze-dried food and beef jerky we watch the light play on the walls of Mount Asgard as the sun circles around us in a tantric springtime dance.

On day 14 of our journey we ski into Pangnirtung. In order to spare ourselves the baggage overages on the flight out, we decide to strip all the hardware from our pulks and give the bare orange sleds to some worthy recipients. As it happens, a group of kids have been spending the entire day sledding on a small hill in front of the house we’re staying at. Their sled mimics the ubiquitous snowmobiles of their elders–a homemade, steerable three-ski contraption that they battle each other to use.

I offer them one of our plastic sleds and all four kids excitedly hop in and glide twice as far as their other ride. They quickly abandon the old sled in favour of the superior pulk. Like their forefathers choosing a rifle over a spear, these young Inuit adapt easily to this new technology. In this case though, it isn’t for survival–it’s simply for fun. 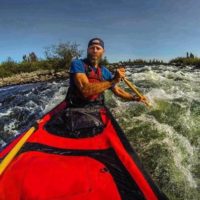 Frank Wolf recently released his first book, Lines on a Map. He lives in North Vancouver, BC and can be found on his site, Twitter and Instagram.