It’s that time of year when you might find yourself accidentally oversleeping due to prolonged morning darkness and missing your evening rides. The dark, snowy days of winter are coming and they can be gloomy sight for singletrack lovers. The bright side of winter is exploring places further South! Personally, I try to plan a winter mountain bike getaway each winter. Utah is one of my favorite spots and is known to have a gold star on any mountain biker’s map. The state has incredibly dynamic terrain to satisfy all flavors of mountain bike styles. From the aspen lined trails and roller coaster mountainous climbs to the ledgy, rocky desert trails down South, Utah has something to offer every day of the year.

The Southwest is a great place to visit in the winter for abundant sunshine, crystal clear blue skies, and crunchy dirt. Lately, I’ve been exploring some of the paths less traveled. I’ve done my fair share of racing in Utah, and St. George has been one of my favorite spots. I wanted to go back and see what else I was missing in the quiet corner of Utah.

I’m originally from New Mexico, but I live with my husband in Kelowna, BC. Our winters aren’t insanely cold, but it’s cloudy the whole winter and we can’t mountain bike outside. I did a scouting trip last time I was in Utah for our next winter getaway, and it’s definitely going to include some new spots! We hopped on a plane and flew into Las Vegas, NV. A lot of times, people think you need to fly to Salt Lake to access Utah’s finest playgrounds, but Las Vegas gives you easy access to the southern portions of Utah.

In just a quick 2 hour drive, we were in St. George. St. George has been growing and is one of the fastest expanding metropolitan areas in the United States. It’s home of the March endurance race, True Grit, but also St. George and the surrounding area is home to 296 miles of trail (154 trails to be precise). It also is the gateway to the stunning national parks of Bryce Canyon and Zion. A huge bonus is St. George is 20 minutes away from Hurricane where even more trails are sought after such as Gooseberry Mesa.

The biggest buzz in St. George is the new municipal bike park. It will be the only year-round bike park in Utah. Before it’s official grand opening, Mayor Jon Pike said, “We haven’t even opened the park yet and the hundreds of riders that are there on a daily basis leads us to believe that it is going to be an enormous success! We may need to start planning for the second bike park sooner that we thought.”  The city of St. George has been instrumental for increasing mountain bike culture and a lot of the city employees are avid mountain bikers themselves. The bike park is the icing on the singletrack cake. Mayor Pike said “We have seen the mountain bike scene explode in St. George over the past decade. As a city we realize that it’s a big reason people are moving to and visiting our area. Creating a legitimate bike park to compliment what we already have was a no-brainer.”  Snake Hollow St. George Bike Park offers obstacles for anyone. From the smallest bumpy sections to learn bike handling to massive jump lines, anyone can have fun.

St. George is well known for its Zen and Barrel Ride sections of trails and the popular Gooseberry Mesa in Hurricane, UT is listed as one of the top rides in America. However, what happens if you happen to catch St. George or Hurricane on one of its few rainy days? That was the case with our last visit. A common rainy ride are the cowboy trails, but after we stopped in to see Quentin at Over the Edge Sports, he took us on a trail system he built himself. Quentin said, “If you like technical, you’ll like these.” Our eyes lit up. The trails we rode were the Boy Scout Trails. The trails consist of varying levels of rocky technical moves that require full attention to where you put your tires. Make sure to have the shocks open on your bike! 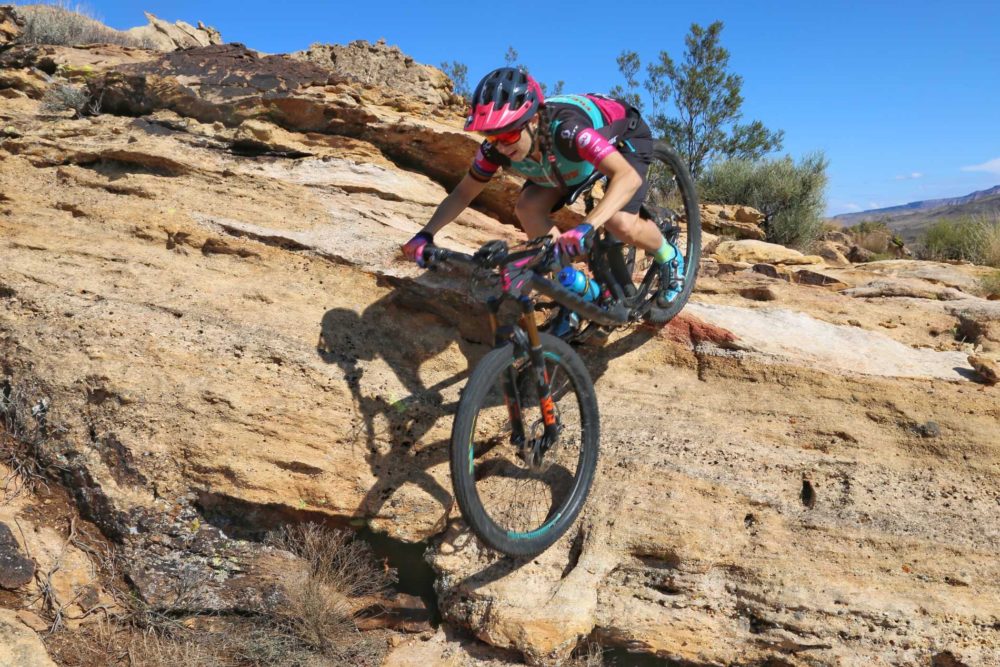 Our next stop was in Cedar City just 52 miles past St. George. I was pleasantly surprised with the sandstone and purpose-built trails and even a shuttle ride on the C-Trail. What’s more is that Cedar City has a proposed 100 miles of trail to be built in the future. The locals are very involved with their Dixie Mountain Bike Association (DMBA) which is a local chapter of IMBA. The city was originally named due to all the trees in the area that were mistakenly thought to be cedars. In reality, Cedar City is surrounded by evergreen Juniper trees.

There was a lot of riding to be had with over 50 miles of existing trails. First, we were shuttled up to 8500’ to rip down the C-Trail. The C-Trail itself is about 4.5 miles and drops down 2300 ft. It’s not a beginner ride and has some fun features. Note: You could elect to climb up the trail as well, but it’s more fun coming down! The trail starts with some fun corners and became more rocky the lower we dropped. We cut off the C trail to Highlands and Green Hollow to see some other sections. The Lava Flow section is guaranteed to get your attention! It waits for you with jagged lava rocks. It is visually intimidating, but the line is easy to spot and is built really well. It’s rated as a double black diamond trail and was handcut by friendly locals from the Dixie Mountain Bike Association. There are some technical moves through rock gardens and some fun, rollable boulders. We linked up the trail: C-Trail, Highlands, Green Hollow, Boulder Dash, Lava Flow.

Another fun place to ride without a shuttle in Cedar City is the Three Peaks Trail System. There’s a variety of small wood bridges, boulders of varying level of difficulty and flowy sections. There are also some nicely developed camp sites. The Twilight Zone and Whale Trails are popular loops. There is also a practice loop with small features of rocks and bridges. It’s a great place to develop your skills! If the trails in Brianhead are not under snow, you can take a quick drive up the canyon to ride the mountains! 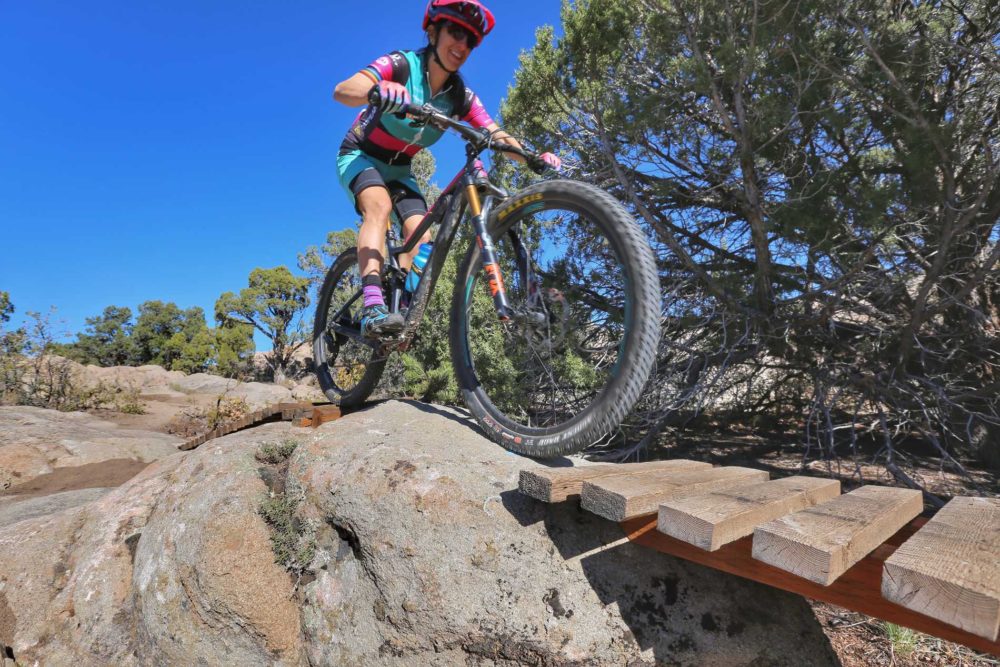 And if you want to extend your road trip to a hidden gem that even some of the locals don’t know about, check out Good Water Rim outside Green River. The people that know about it absolutely love its grand views as it is also dubbed the “Mini Grand Canyon.” It’s rated as a beginner to intermediate trail so most people can enjoy it. With chunky white rock and orange dirt, you’ll feel the earthy desert textures right underneath you. There are no tough climbs or long descents. You can wind along the rim of this spectacular canyon and there will be plenty of photo opportunities! If you love to camp out after your bike ride, there are numerous BLM camping spots if you want to treat yourself to a crisp night under the stars. If you want to fly home from Salt Lake and stop by some of the breweries on your way home, the airport is less than 3 hours from Green River.

Utah has incredible amounts of singletrack to ride and a lot of variety. It’s a great winter riding spot with hundreds of miles of trail nestled into the Southwest corner for riders of all abilities. And if you want to add more onto your trip, you can check out the picturesque neighboring national parks of Zion, Bryce, and more for hiking and camping!

Sonya Looney is a Professional Mountain Biker, host of the popular podcast The Sonya Looney Show, a sought after keynote speaker, a writer, and an entrepreneur.  She founded her sock ad apparel brand, Moxy & Grit.  She has raced her mountain bike in the Sahara Desert, Himalayas, tropical jungles, and mountain ranges all over the world. Her spirit for adventure, personal growth, and taking on new challenges has driven her to over 25 race wins during her career, including four 24-Hour national titles and the 2015 world champion title.  For more on mountain bike travel, check out Sonya’s Instagram and Website.