Even when nothing really goes wrong, scaling the world’s biggest mountain is no small feat. 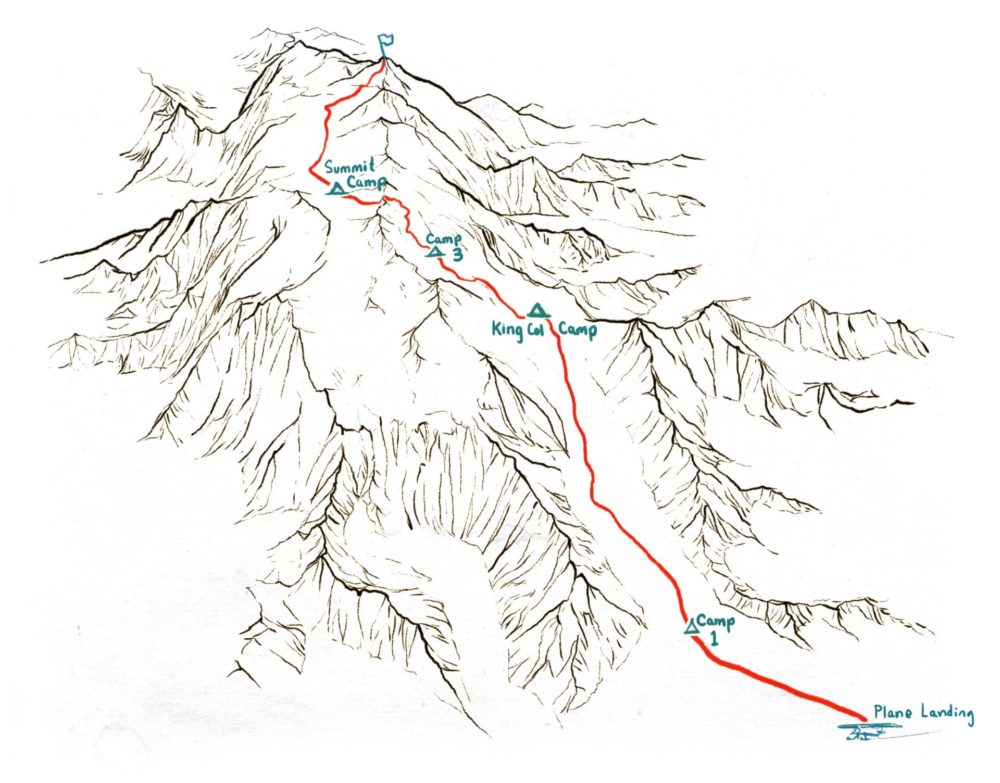 “If anyone’s up on the ridge, they’re dead.”

“What?!” mimes my tent-mate Chad Sayers.

A deafening roar overtakes our so-called conversation. This time I yell.

“I said, if anyone’s up on the ridge—they’re dead!”

Sayers doesn’t respond, digging frantically around the outside of our four-season tent—a descriptor that leaves me wondering if there might be a fifth season I’m not aware of. It’s May 2nd on Canada’s highest peak and the birds aren’t singing. There isn’t a tulip in sight. In fact, I can barely see Sayers for the blowing snow.

We’re bungling around at Camp 1 on Mount Logan’s standard King’s Trench route. High above on the mountain’s flanks, gale-force winds whip over rock features, roaring in locomotive-like chaos. The death zone I referred to is higher still, on Logan’s notorious East Ridge, where the brunt of the storm is focused.

Sayers grimaces through a Gandalfesque ice beard that has fused together his hair, goggles and jacket zipper. He’s desperately trying to tie a granny knot to our tent with a 2-millimetre cord, with what effectively amount to oven mitts.

Despite being relatively low on the mountain’s easiest route (“cake-walk,” I was told), we’re acutely aware of previous expeditions who’ve had tents—even people—vanish into the abyss in hurricane winds. So this cord could literally be the fine line separating us from a mere fitful night’s sleep, or a terrifying fate. While we hope for the less nightmarish option, elsewhere on the mountain Natalia Martinez has crossed that line.

Nearly a vertical kilometre above us, at 3,700 metres on the East Ridge, the 37-year-old Whistler-based Argentine climber is defying my prediction. Outside of our five-man team, she’s the only other climber on Logan, attempting to become the first woman to solo it. Fighting alone against a Pacific low-pressure system, in desperation Martinez has set her alarm to a two-hour schedule, repeatedly digging out her tent in a sort of nightmarish version of Groundhog Day until, after a day and a half, the wind intensifies to the point that she can no longer emerge from the hole.

Like a de facto human guy-wire, she’ll forego food, drink and sleep for an additional 14 hours, pushing with her arms against the tent’s nylon walls and delicate poles, bracing against the battering of a 130-kilometre-per-hour wind. When her arms lose strength, she’ll use her head, then her back. Her mental strength will not flag.

“The storm was long… I was tired… and the wind was really strong,” recounts Martinez. After hearing of the incoming storm via her phone, she too had been trepidatious about her fragile shelter, and initially planned to dig a snow cave just like she’d learned on expeditions to Patagonia. Then the unpredictable happened. “Everything changed after the earthquake.”

In the early hours of May 1st, two huge tremors—6.2 and 6.3 in magnitude respectively—rocked the Yukon close to Mount Logan, knocking boxes off store shelves in Whitehorse and launching seracs dangerously close to Martinez’ tent. Critical snow bridges on the East Ridge collapsed, forcing her to retreat to a compromising spot that was more exposed to wind. She’d already requested a rescue, but the larger-than-expected storm had other ideas.

In a strange twist, while Martinez battled, the international news had picked up on the story of a female climber stranded near the top of Mount Logan, awaiting rescue after the mountain shook her route apart. The world and Martinez alike hoped she wouldn’t be whisked away by hurricane-force winds, but rather an incoming Parks Canada helicopter….

The full story and many others come from the pages of the 2018/19 Mountain Life Annual.  Support independent, award-winning media—Order Today and receive this issue hot off the press.