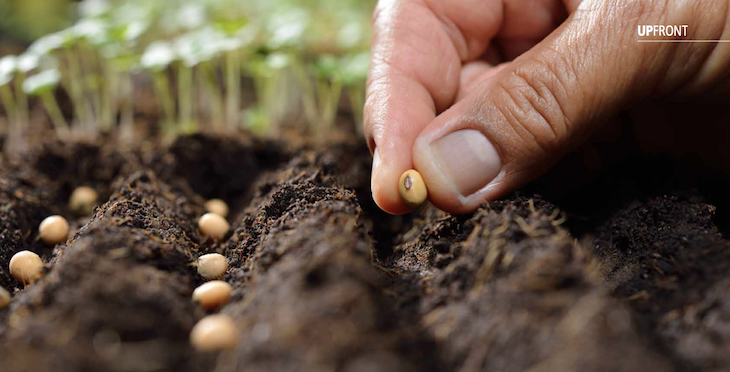 “My way to change the world, since I started gardening, is to encourage people to start being self-sufficient,” said cook, gardener, and freegan-hippie Erin Baumeister, who initiated Pemberton’s first Seed Swap in 2016.

Baumeister is part of a growing movement of community activists dedicated to ensuring all people have access to open-pollinated seeds. These self-proclaimed “feed ‘em fighters” and “peas keepers,” are trying to protect the foundation of the food system from a corporate-driven, worldwide seed patent campaign. (Currently, four companies own 70 per cent of the world’s seed stocks.)

At the Sea to Sky’s initial “Seedy Saturday,” under the shelter of Pemberton’s downtown community barn, I traded in the sunflower, dill, and cosmos flower seeds that my three-year-old son and I had shaken into brown paper bags earlier in the fall (ya, it really was that easy). In exchange, we scored little seed envelopes of peas, squash, rutabaga, and black tomatoes, all for free! We tasted sunchokes, and I bought a few sad-looking canes that would later turn out to be particularly robust at growing in our microclimate and deliver a veritable motherlode of raspberries.

Excess seeds left over from Pemberton’s first seed swap were combined with seeds donated by West Coast Seeds, to become Pemberton’s new Seed Library, a treasure hoard that has now found a home in the Pemberton & District Public Library.

Originally conceived back in 1999 by Sascha DuBrul, a UCal student and activist interning on a BC farm, the Seed Library idea is simple, accessible and experimental. The point is not to bank the seeds for preservation, but to disseminate seeds to as many people as possible and make the lost art of seed saving and seed sharing a mainstream activity that can connect communities and promote an affordable way to try growing your own food. A library in New York State first picked up on DuBrul’s idea and it has since “gone fungal” (the slower more sustainable version of going viral). There are now at least 24 seed libraries across British Columbia alone, with most based out of public libraries. Squamish established theirs in 2017 and this spring saw Pemberton follow suit.

The process is library-familiar: you select a packet, fill in the form and pledge to bring some new seeds back in the fall when you collect your harvest. (And don’t panic if you muck it up like I did, and accidentally tear out your runty, under-watered seed library peas in an aggressive fit of weeding and/or gardening ineptitude.)

“We won’t fine you if you don’t bring them back!” says Pemberton’s library director Emma Gillis, who adds that food literacy and life literacy are not so far removed from each other.

Escapism, optimism, a tweak in perspective: Libraries have always been the first port of call for anyone looking for a solution, or a new way of looking at the world. And they’re radically accessible to anyone. What better place to hide the seeds of resistance and sow the possibility of an alternative, non-corporate, monopoly-free future – in plain sight, among the stacks. Your next dinner, and a better world, await. -ML