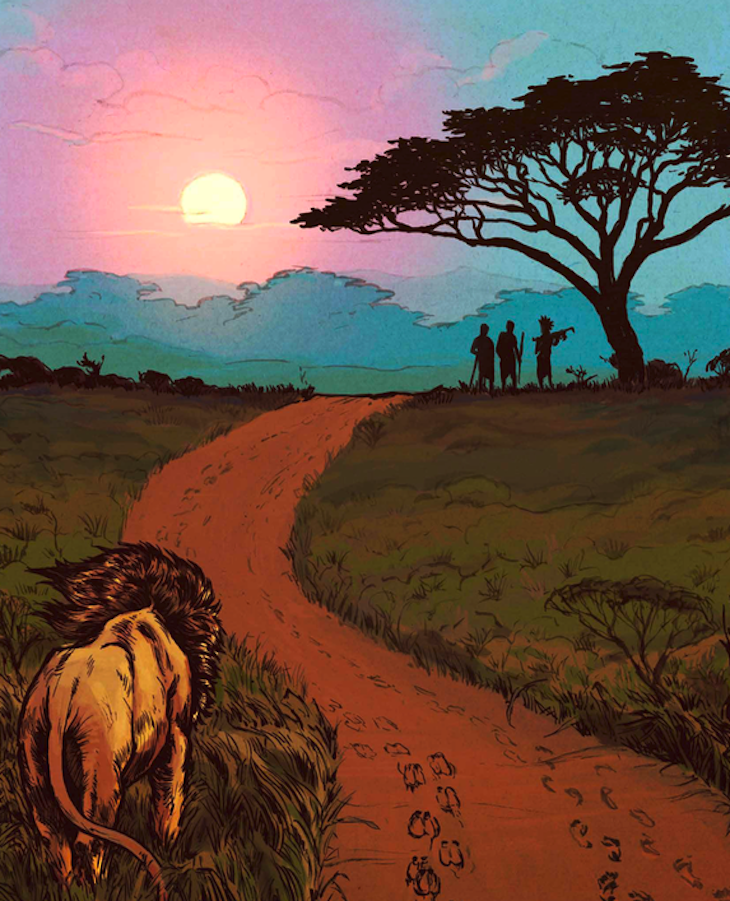 Tina spoke casually and out of context, as if discussing the weather, “If the camp comes under attack, and you have to escape into the desert, and survive out there for some time, go with Jawas. He’s your best chance to come home alive.”

“Right, of course, Jawas,” I mused. “The quietest, most unassuming of the young men, with a shy, almost feminine smile, always in the background. I should have guessed that he is the real warrior of the bunch.”

I was hanging out in northeast Kenya with Samburu herders, relatives of the Masai. It hadn’t rained here in three years and every living thing was just hanging on, parched and dusty, browned and withered under the tropical sun. I already knew that if an attack materialized, it might come from Chinese-backed government soldiers to steal land that contained
oil, or alternatively, from Somali road pirates on a raid, reminiscent of Sioux horse-stealing parties in the Wild West days of North America. The government troops are dangerous because they have helicopters, but the Somali pirates are dangerous because they are very good at what they do.

The next day I gave Jawas one of my precious solar-powered flashlights, and another to Tiepe who always carried the AK-47. You make alliances where they are most critical.

A few days later, Tina announced, also casually – it seems that everything is casual, matter-of-fact, out here, where survival hangs on the slimmest margins – that one of our camels had wandered off. Would I mind tracking the camel with Jawas? It probably wasn’t far and shouldn’t take long. Right. I tossed two litres of water into my daypack and picked up my club and my walking stick. When I had first arrived in camp, Jawas instructed me that if attacked by a black mamba snake I should flick it away with the walking stick, but if charged by a lion, I needed to rely on my club. I thought he was joking, but then again, warriors don’t joke about dangers on land.

“I understand,” I replied, without really understanding. “So… How do you stop a charging lion with a club?”

“Ah, yesiree,” replied Jawas in his slow, soft drawl. “You need to know. White men think to hit the lion on the forehead. Ah, but you cannot stop an angry lion that way. Nosiree. Do you understand? You step sideways quick, leap, and hit the lion on the side of the neck. Right on the backbone. Hard.” And then he demonstrated, leaping and twisting with the speed, agility, and power of an NFL running back. Jawas had a more lethal club than mine because he had stolen a lug nut off a long-haul truck that had been running freight to Ethiopia, and threaded it onto the end of his stick, just to up the ante in the lion-human arms race.

The camel’s tracks ran straight out of the canyon and then veered north when it had reached the broad savannah. On alert for lions and black mambas, I followed the footprints, and then stopped to wait when Jawas uncharacteristically lagged behind. When he caught up, my friend pointed south and said, “The camel is that way.”

Jawas instructed me that if attacked by a black mamba snake I should flick it away with the walking stick, but if charged by a lion, I needed to rely on my club.

“And how do you know that?” I asked, suspecting some tidbit of aboriginal wisdom.

“My cell phone,” he replied. “Someone from the next village saw the camel south of here. It is far away and moving fast.”

At noon we sat under an acacia tree and shared my water. I’m an old man, I was tired, and we had a long way to go. Dumb camel. But you know, for all the commotion about lions and black mambas, snake-flicking walking sticks and lug-nut-tipped clubs, I felt safe out here in the solitude, and relaxed. People, myself included, are way too complicated. And dangerous.

The cell phone rang a cheery little jingle so unlike an African drumbeat. A five-year-old boy herding his camels alone in the desert with his walking stick and club, had found our camel. We just had to go down and pick it up.

If I had an extra solar-powered flashlight, I would have given it to the kid. But I don’t think he would have understood. He was afraid of me, a strange white-skinned, white-haired apparition stepping out of the bush. He knew, even at an early age, that human beings are way too complicated. And dangerous.

Jon Turk is the author of four travel books including The Raven’s Gift and Crocodiles and Ice. He was honoured as a National Geographic Adventurer of the Year in 2012 and was the keynote speaker at Mountain Life Multiplicity 2017. jonturk.net