To be a successful surf photographer in the Northwest takes a heavy dose of grit and a true passion for the wild BC coastline. Marcus Paladino has both of those in spades. Born and raised in British Columbia, Marcus’ passion for the coast was uncovered through his time away from it– but that hasn’t hindered his ability to channel the character of the coast through his work.

After winning People’s Choice Award in the Capturing the Coast photo contest put on by the Raincoast Education Society, we caught up with Marcus to chat about Canadas surf scene, the BC coast, and more. Check out his winning slideshow here, and for more of his work visit his website at www.marcuspaladino.com —Ben Osborne

So….who is Marcus Paladino?
I’m originally from Nanaimo, BC on the east side of Vancouver Island. Now, I live in Tofino on the west side. I’m a professional surf photographer—whatever that means. I’ve been doing that full time for the last few years now.

Was there a specific moment when you could say, “This is it—my full time job”?
Well, It definitely happened consciously. I quit my job to go on a trip to France with some friends and when I got back I just said, “You know what—I don’t want to get another job. I’ll just keep shooting photos.”. All of a sudden, a year passed and it was a full-time gig.

“I quit my job to go on a trip to France with some friends and when I got back I just said, “You know what—I don’t want to get another job. I’ll just keep shooting photos.” All of a sudden, a year passed and it was a full-time gig.”

Why do you shoot primarily in the northwest? Is it purely coincidental because of where you live, or is that a specific goal of yours?
I like capturing what I see on a day-to-day basis. It’s where I spend most of my time—Tofino is my home. Even when I’m not here (in Tofino), I’m always homesick for it. I shoot a little bit on other parts of Vancouver Island, but mostly here.

Did you grow up surfing?
I’m 27 years old—there is no surf in Nanaimo and as a kid I always thought it would be so cool to be a surfer. I always thought since I was from Canada, it couldn’t be a “thing”. In my teenage years, I was a huge snowboarder and I loved the mountain lifestyle. I had big aspirations to become a snowboard photographer. I was living in Sun Peaks and I was introduced to Tofino as somewhere to go in the “off-season”. I spent the summer there and it changed everything. That was in 2011.

How was it adjusting to the Pacific Ocean from the mountains?
I grew up around the ocean even though I started as a snowboard photographer. A lot of my childhood memories are from the ocean. I didn’t even think how connected I was to the ocean. When I lived up at Sun Peaks, I had this weird, eery feeling. There was no breeze, no ocean, no salt, no “end” to this—it’s just land. I felt a bit trapped.

Does that connection to the coast drive a lot of your creativity?
Yeah, I just love the coastline. Epecially the BC coastline. Its so vast and unexplored, there is so much potential for untapped waves from here to Alaska and no way to access it….unless you had a helicopter and lots of money.

“He surfs like it’s the last turn of his life, and I think that’s really cool.”

The BC coast is gnarly. Any times it has taught you a lesson?
I got a good ass kicking when my housing (for my camera) broke. I got swept around a point and into a river. I was trying to crawl out, I fell and hit a rock and I lost thousands of dollar of camera equipment. I ruined my camera. The ironic thing was, the surf was so bad and I lost it all for nothing. Definitely a learning experience there.

How did you start shooting surfing? What was it like getting in the water your first time?
I have been surfing since I moved to Tofino, but I was so dead broke I didn’t have any money for a housing to shoot in the water with. All I had was my camera and a little telephoto lens. I shot with that setup for a couple years. But I had been surfing every day and taking so many mental images while I was out surfing. Finally I had a bit of money and someone was selling their old, used housing –and I could finally capture all the things I had seen in my head for years.

I bet it opens up a whole new world.
For sure. Some photographers are totally landlocked, some only shoot from the water. I love shooting from the water because it is way more of a challenge and you get some interesting shots. On land, you get to work on your composition and work on angles. You have to think how something is going to look depending on where the sun is, and it is a bit more strategic. Shooting from water is a lot more hard work, and a bit of luck. With surfing, you can’t really control what is happening. You can’t tell a surfer to do a specific move—you just have to find an angle, post up, and hope something happens. There are so many times I’ve lined up a shot, I think it’s gonna be a cover, and then no waves come. But I try to keep those situations and specific angles in the back of mind for later dates.

Explain the process of shooting in the water with surfers.
It depends on the conditions. A lot of the time, if I have a certain angle in mind, I can express what I’m wanting to do before the session. Pete Devries is an awesome guy to shoot with because he looks at everything as if he is a photographer. He knows when to focus on airs, and so on. It’s awesome to shoot with guys who are as in to getting the shot, as I am of taking it.

“I love shooting those moments that most people don’t know exist. If there is one thing I want people to take away from my work, I want them to look at a photo so deeply that they can almost forget that there is someone taking a picture—I like to make it as if the photographer is not even there.”

Whats your favorite place to shoot?
Well, I cant quite tell you because it’s secret. It’s a bit of a ways out there and requires an early morning wakeup and a drive from home in the dark. It’s so fickle and we have gotten skunked so many times—but it’s worth it for that one time you go and it’s firing. It’s just a matter of being keen for an adventure without guarantees of even surfing.

Does that give you more fulfillment?
For sure. Surfing in general is a little different from snowboarding or skateboarding, photography-wise. You can’t set as many things up. It’s so condition dependent, and especially in Canada—the good spots here are super fickle. We usually have small windows of good tide and weather, so that plays a big role in it.

Any good run-ins with ocean animals?
Nothing too significant, actually. At that one secret spot, there are tons of sea lions. The last time we were there, actually, there was a pod of 10-15 sea lions sitting in a circle and barking at us. It didn’t bother me as they were pretty far away. But as I was shooting I could see them swimming through the waves towards me. One ended up charging me and barking, so I got out of there pretty quick.?

Where do you see the direction of the surf scene going? Will surf exploration be at the centre? Where does Canada fit in?
Well, I think cold water is becoming cool. That has not been the case in the past. It used to be a novelty, but now the wetsuits have gotten so much better. Now, you can surf normally and you’re not frozen stiff. Mason Ho and Mick Fanning with went on one trip with Rip Curl to Alaska and it was such a rad video. They didn’t score the greatest waves, but the whole experience was awesome. They could take that trip and do it in Canada and probably get better waves. Maybe less ice chunks in the water—but still lots of good scenery.

You work with a tight group of surfers in the Northwest. Are there any surfers that you would especially want to work with?
Anyone who inspires me I am keen to capture. If I Had to choose one, it would be John John Florence because he is hands down the best surfer in the world. I know saying I want to do a trip with him is shooting for the stars—but that is the truth. Dane Reynolds as well. He’s insane and his surfing is so radical—he surfs like hes mad at the wave and I dig that. You can really capture that in photos and videos. He surfs like it’s the last turn of his life and I think that’s really cool.

You probably suffer a lot getting these photos. What do you suffer for? What do you want people who look at your work to take away?
That’s an insane question. I’ve never thought about that. I’ve always been fascinated with taking that moment out of something that is really quick. As a kid, I remember playing with my moms’ camera and getting my friends to jump off a dumpster just because I loved capturing them mid-air. I love those little moments that you don’t get to really witness. That’s why I was so drawn to shooting snowboarding and now surfing. I love shooting those moments that most people don’t know exist. If there is one thing I want people to take away from my work, I want them to look at a photo so deeply that they can almost forget that there is someone taking a picture—I like to make it as if the photographer is almost not even there. 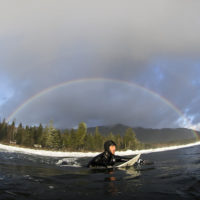 CAPTURING THE COAST: MARCUS PALADINO’S AWARD WINNING SLIDESHOW
You don’t know until you go. The west coast of British Columbia epitomizes unpredictability with its constantly shifting forecasts, unexplored coastline, and harsh conditions. Lucky for us, there are a few hearty souls who choose to capture the unmatched beauty of the coast, no matter the weather. Watch Marcus Paladino’s People’s Award winning show from the Capturing the Coast slideshow competition, put on by the Raincoast Education Society…. Read more