Recently I was told a story about a group of guys who had gone to Mexico with their wives. While the men went fishing, the women – who didn’t know each other – were left poolside to bond. I can’t recall what the point of the story was because I fixated on the detail about the women. It struck a familiar cord of anxiety within me. It was the same gut reaction that I have experienced since I was a child, being forced to socialize based on my genitals, rather than my personality, interests or abilities.

I was seven the first time I was introduced to this stigma. I remember being sat next to a girl while both our moms watched expectantly for our friendship to instantly blossom. I took one look at the bows in her hair and her pink tights under her frilly dress compared to my dirty fingernails, gumboots, and bowl cut and realized it was not going to work. Nope. No way. I got the hell out of there. High school only served to reinforce the insanity and I have been running from the stereotype that all vaginas are the same ever since.

Well into my twenties I came up against the expectation that I should automatically be friends with women again and again. The Girlfriend Couch was what I called it when, at parties, the women would all sit together gossiping and talking about shopping. Again, here I was with my dirty fingernails (maybe I had a hygiene problem) wishing I were hanging out with the guys talking about anything other than designer brands. This situation would create a no man’s land where I often found myself – trapped between wanting to have fun and fearing the wrath that would be brought down on me by the women if I shirked my feminine responsibilities.

When I first started working in the mountain bike industry I was constantly asked to write about women’s topics – the problem was that I don’t believe this to be a genre, no more than I believe women-specific bikes to be a sound investment.

Similar situations have followed me throughout my career – including writing. When I first started working in the mountain bike industry I was constantly asked to write about women’s topics – the problem was that I don’t believe this to be a genre, no more than I believe women-specific bikes to be a sound investment. Even when it came to learning how to mountain bike, I tried the traditional women’s only classes – but it simply reinforced the fact that just because we all have innies doesn’t mean we learn the same way or even have the same goals. Taking a mixed-gender class based around my ability gave me confidence on my bike and the ability to be myself (read: terribly sarcastic). And it allowed the men in my class to feel comfortable riding with women right from the start. How can we expect men to be inclusive of women in sport if they aren’t given the opportunity to see us as equals? Expecting us to travel in packs only serves to create a more polarizing social situation. One dog is cute; a pack of dogs is terrifying.

When I am on a backpacking trip, how capable a person is is more important than whether we can talk about our periods. Out on the trails being able to change a flat – and laugh at yourself – are qualities that matter most to me. In the wilderness we have to be judged by who we are and not what we are; our gender becomes as irrelevant as our Tinder matches or Instagram likes. The friendships I have made with men and women through these types of experiences are the ones I have sought intuitively since I was seven years old. They are built on who we are, what we like, what we laugh at, and what we want to do. They are defined by freewill and choice. They are not defined by something I was born with – we wouldn’t judge a camel by its toe would we? 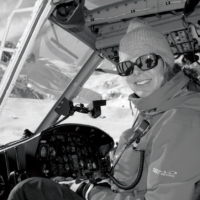 RECLAIMING THE F WORD: RAISING A LITTLE MOUNTAIN PERSON TO BE FEMINIST AND FUN
There comes a point where living the dream often translates into having the chance to introduce your kids to the things you live for. You don’t want any put-em-in-boxes gender stereotyping crap undermining the passion that you managed to cultivate and nurture through the early morning battles to get their gear on or all the powder day laps you forfeited snowplowing down the bunny hill until they found their feet…. Read more