In February 2017, I attended the Home Horizon “Coldest Night of the Year” in Collingwood, Ontario. It was an event to raise funds for homeless women, children and youth. Leaders of Home Horizon were joined by hundreds of supporters including families with young children. The morning was unseasonably warm and spring-like but by late afternoon when the walk began, the weather turned appropriately cold and snowy and the marchers had to wear parkas, scarves, toques and mitts. Inside the United Church was a figure bundled up in a sleeping bag. At first glance it appeared to be a person, but it turned out to be a dummy, dressed up with great realism to dramatize the plight of those without homes. 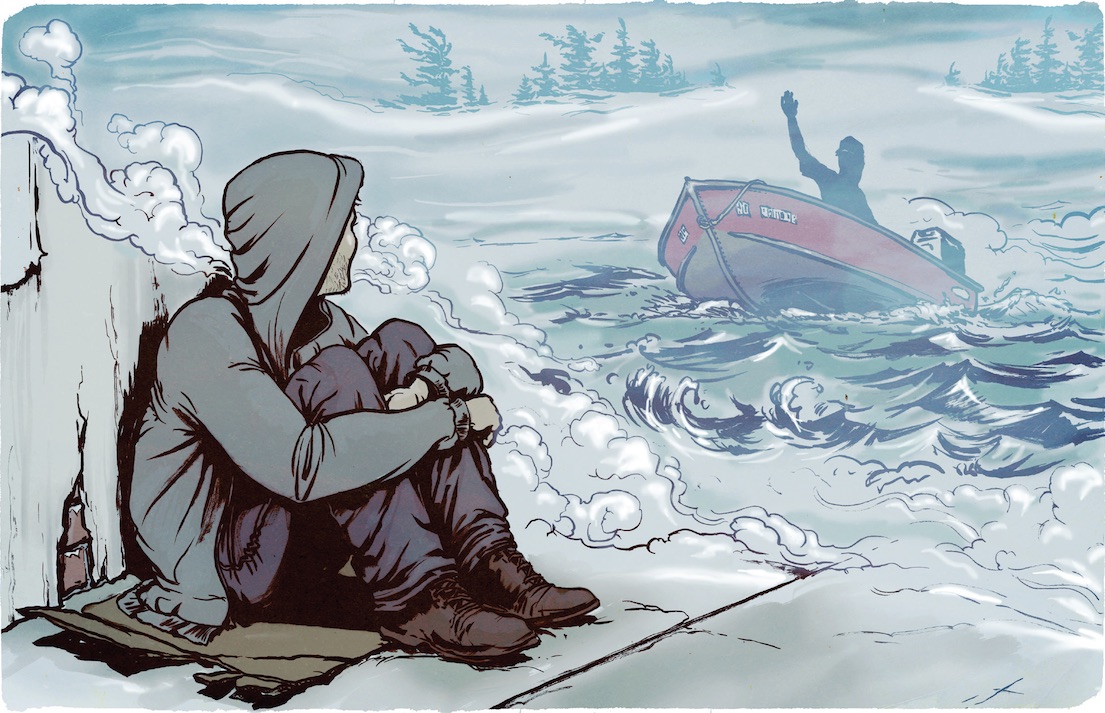 Homelessness is a serious problem in Canada and our community. At least 50 young people have been identified as homeless in our area, and there may be many more whose plight is unknown. The “coldest night” was meant to highlight the suffering and was a strong and vivid effort that succeeded. One has to remember that most of those who turn up to help at such events have warm homes to return to, and their ordeal is temporary.

A wealthy friend participated in what was supposed to be an overnight sleep-out on a Toronto street and only lasted until 2am, upon which she returned to her Porsche and drove home at high speed.  She was so shocked by the cold and discomfort that she doubled the size of her donation to the charity that organized the event.

The event in Collingwood reminded me of my own ordeal on a bleak shore of an island in northern Ontario in 1980 where I nearly lost my life. I was with a close friend, George Czerny, then publisher of the Collingwood Enterprise Bulletin. In those years George organized an annual fishing expedition in May to Lake Kashbogama, a remote and large body of water in a forested area north of Sudbury. I was with the group organized by George, fishing with canoes and small boats powered by outboard motors. Even well into spring, northern waters can be forbidding. The day started mild and sunny like the day of the “Coldest Night” in Collingwood but by late afternoon it turned cold and started to snow.

George had given me the assignment of picking up two of our party who were fishing from one of the islands. Darkness and fog were setting in, and I lost my way and started to run low on gas. I landed on one of the islands to try to get my bearings, but found myself without sufficiently warm clothing and started to shake and shiver. I had no matches or food. It soon set in that I was in deep trouble and might not make it out of there. I started to have morbid thoughts about my plight and about the embarrassment of a pointless death, leaving a wife and two small children and a sad story in local media. My thoughts also turned to a night in February 1954, when I had been a teenaged member of a search party that retrieved a lost skier from an avalanche at Blue Mountain. Yes, we did have an avalanche, and if called on to prove it I have a hand-crafted plaque inscribed by the near-victim, George Bornet, who had been buried by a snow slide near the top of the Escarpment.

This story had a happy ending. We got the lost skier into Collingwood Hospital where he was treated for hypothermia and released the next day to go home to Toronto.

I started to have morbid thoughts about my plight and about the embarrassment of a pointless death, leaving a wife and two small children and a sad story in local media.

My ordeal on Lake Kashbogama also had a happy ending, thanks to George Czerny, who was a great leader for our little party. Realizing that I had been gone too long, he found the other two fishermen and found me, gathered brush, and started a fire to warm us up.

Returning to camp we got help from another experienced outdoorsman in our party. Ted MacAteer was a survival expert and had the skills and equipment to make us comfortable. Out of his Chevy Suburban he dragged a huge and sturdy tent, which he set up and warmed up with camp stoves. He went to neighbouring campers and traded pancake batter for cakes, so we even had eggs and bacon for breakfast in the morning. That night I shook and shivered in my sleeping bag, even though clad in all the clothing I had brought with me.

I often reflect on my good fortune in being rescued by George and Ted, who enabled me to have a long life. I was able to participate in the growth of a great ski resort and its development into a year-round resort destination and village.

I enjoyed watching my children and grandchildren grow and flourish.  I had the opportunity of writing a book and some articles, including one describing the rescue from the avalanche.

Many do not enjoy the benefits of family, friends and good luck. Not until recently did I learn that George Czerny himself had experienced an episode of homelessness. He told me that when he was a teenager a friend got his family to take him in.

George Czerny’s two children Steve and Doug accompanied us on many of our fishing trips.  They continue to live in the Collingwood and now have children of their own.  George lives nearby and writes books, promotes Georgian Bay tourism and enjoys his extended family with his wife Nancy.

By another coincidence, my son Mike and his family have been supporters of a youth program in Ottawa, where they organize events to publicize homelessness and raise funds for programs, including the building of an apartment complex to house these unfortunate young people.  In August 2016 they were honoured at halftime in a game between the Ottawa Red Blacks and the Toronto Argonauts. The Red Blacks lost that game, but went on to win the Grey Cup later that year. Mike and the organization are winning in their attempt to reduce homelessness.

I am always struck by coincidences and the way they can make up a chain that seems to have importance and meaning. Here was George Czerny, rescued from homelessness by a kind family and then going on to rescue me, after I had helped rescue the avalanche victim George Bornet. Major religions have a saying that if you save one life you save the world. This is, of course, an exaggeration, but as a metaphor, it underscores the power of charitable actions and deeds.

The world was horrified on June 5, 2017 when a terrorist attack killed seven people in London, England.  The deaths included that of a Canadian woman, Chrissy Archibald, who had been a volunteer with shelters for the homeless. Trying to find solace from the loss of their lovely daughter, the parents had this message: “Volunteer your time and labour or donate to a homeless shelter. Tell them that Chrissy sent you.”

I greatly admire the work of organizations such as Home Horizon, and I am helping Home Horizon with their latest project, a transitional shelter for homeless youth. After receiving my donation they named the building for my dear wife Barbara. The Home Horizon Barbara Weider House was built by Ray, George and Van Smith on Campbell Street and is now in use. Home Horizon has raised about half of the $850,000 required, but needs more contributions. Together with George Czerny, I encourage the community to provide support for this important cause.

George Weider—son of Blue Mountain Resort founder Jozo Weider—is the former BMR Chairman and President. For more info on Home Horizon and how to donate, telephone 705-445-5478, or visit homehorizon.ca. Coldest Night of the Year: cnoy.org