He was among the first to snowboard at Sunshine and Blackcomb (at the time two of the only places you could in Canada), he’s competed in over 25 World Cup events and represented Canada on the National Team in Snowboardcross and Giant Slalom. But Brett Tippie is most recognized for two things: 1. His larger than life personality, and 2. Pioneering freeride mountain biking.

As one of the respected “Godfathers of Freeride”, Tippie starred in the breakout film, “Pulp Traction” and went on to star in the Kranked Series, graced the covers of numerous magazines, competed in the landmark Redbull Rampage and traveled the globe introducing freeride to the world.

The Mountain Bike Hall of Famer, TV personality and Director of Good Times hit the stage at MULTIPLICITY last year to tell his inspiring story. Tickets for this year’s event at the World Ski & Snowboard Fest are on sale now. They sell out fast, so don’t wait. 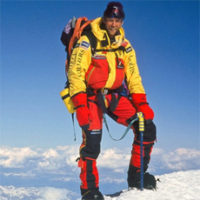 MULTIPLICITY 2016: BRUCE KIRKBY ON LIVING FREE FROM THE STATUS QUO
Recognized for connecting wild places with contemporary issues, wilderness writer and adventure photographer, Bruce Kirkby will be presenting at this year’s MULTIPLICITY event on April 10th at the World Ski & Snowboard Festival. Bruce’s journeys have taken him through more than 80 countries. From crossing Arabia’s Empty Quarter by camel, rafting Ethiopia’s Blue Nile Gorge, traversing Borneo’s northern coast by kayak, or a coast-to-coast Icelandic trek, his adventures read like a bucket list of the most ardent adventurer… Read more