Step. Breath. Repeat. I keep telling myself it’s a simple as that, but for some unknown reason my body and mind refuse to accept it. It could have been the previous eight weeks of mostly sedentary living, but that’s neither here nor there. What’s important to remember here is when given an opportunity to feast on your own private powder playground, you make the most of it– no matter how much pain that may cause when it’s all over. And boy, did I pay.

After a an incredible month in Haida Gwaii working on our documentary film The Radicals, myself, Tamo Campos and Jasper Snow Rosen found ourselves at the Larsen Ridge Cabin above Terrace, BC along with our good friend Malcolm Graham. Our timing could not have been more perfect. It was Malcolm, a long-time Terrace local himself, who had brought up the idea of this trip two months ago and low-and behold, everything lined up just right. We ended up bumping up to the cabin with Canadian Helicopters after rushing down from a morning tour near Shames Mountain. After ferrying over from Haida Gwaii a few days prior, we had somehow found ourselves sneaking into town just before they closed the highway for two days because of over 100 cms of snow in 48 hours. A pretty good sign if there ever was one. So we weren’t gonna waste a centie. We bided our time in the Shames backcountry while we waiting for the heli’s to be done avalanche control. As soon as we got the word, we scrambled back to town, grabbed our packed bags and found ourselves back up in the alpine not two hours later–except this time we had a cozy little cabin to call our own, and nobody around for miles.

This is what I call heaven.

If there’s any better feeling than waking up on top of mountain knowing that there’s three feet of fresh outside just waiting to be ripped to shreds, I don’t want to know. After a mellow night of shirtless cribbage – that stove can pump some heat! – and stargazing, the crew was amping to go. Before I had even finished my breakfast Tamo was out the door and racing the sun for a tasty line on Mount Hipp, about an hour tour from the cabin at what I call “Tamo-speed”. So, probably a good 50% longer for the rest of us. Again, timing was on our side and Tamo managed to send the pretty burly big-mountain line with not more than ten minutes of sunlight to spare. After that it was a quick sandwich on the go and the crew was back at it, touring up the opposite ridge for multiple afternoon glory laps that saw everyone getting their sweat on as we skinned up under perfect blue skies and endless face shots of that sweet cold smoke.

We went into this trip pretty much blind. With absolutely no idea what the terrain up there held for us, we were pleasantly surprised to find a virtually perfect mix of epic tree runs and easily-manageable alpine and sub-alpine laps on all aspects, perfect for days when there might be a bit less snow. All in all, I’d say this is one of the better huts I’ve seen and the best part of it is that it only fits 5-6 people max, so whoever books it first gets it all to themselves. Hats off to the Mount Remo Backcountry Society for building and maintaining the hut. It was loaded with a three-burner stove with propane and pretty much everything you need so all you have to do is bring a sleeping bag and your gear. Too easy. 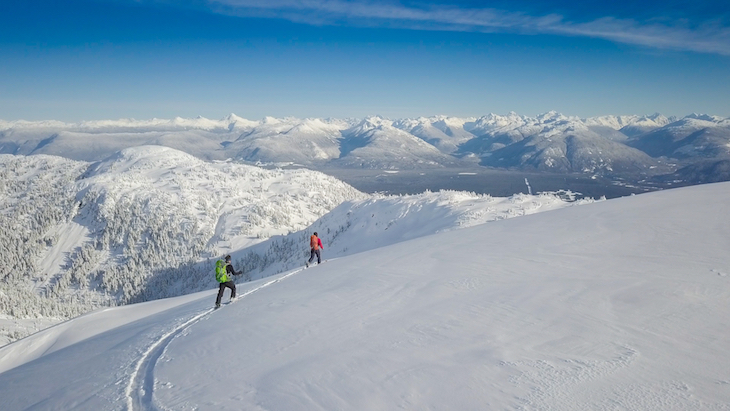 Now to deal with those incredibly sore muscles….when the f*%k did I get so old!?

And book your flight out with the good people at Canadian Helicopters here: www.canadianhelicopters.com/ 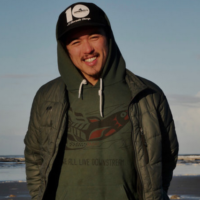 MULTIPLICITY 2017: TAMO CAMPOS AND THE FIGHT FOR WILD SALMON
Tamo Campos is a snowboarder, environmental activist and filmmaker. A founder of Beyond Boarding, a non-profit group of snowboarders, surfers, artists and friends that strive to stand up against environmental and social injustices, Tamo has been spreading his love of the mountains and coast through documentaries such as A Last Stand for Lelu and Northern Grease, as well as writing features for outdoor magazines on the subject of protecting wild salmon… Read more