Phyllis Munday and her husband Don set the standard for Coast Mountain exploration. Almost a century later, another driven lady of the mountains leads a team to retrace the Munday’s steps towards their most sought after peak.

Mystery Mountain. It’s a story of the ultimate adventure: the allure of the unknown, and of testing the limits of physical skill and mental capacity in pursuit of exploration. It’s the story of an arcing trajectory of destiny connected by an idea taking hold in two minds a century apart.

In 1925 on her honeymoon on Vancouver Island, explorer and mountaineer Phyllis Munday caught her first glimpse of the mountain that would become her obsession. It towered above the rest of the formidable coast range in a pillar of remote ruggedness. She named it “Mystery Mountain.” That glimpse sparked a lifelong love affair for exploring the Coast Mountains with the deep-seated peak as the prize, and it secured for Munday a legacy as one of Canada’s most badass adventurers. But while she summited neighbouring Mount Munday and the northwest peak of Mystery Mountain, she never reached the true summit tower of the peak that defined so much of her life.

Generations later in 2016, BC ski mountaineer Christina Lustenberger, already a legend in her own right, would follow the path blazed by Munday for an attempt at the peak that had eluded her predecessor.

This modern mission was the brain child of Justin Sweeny, Arc’teryx North American Athlete Manager. In this era of helicopter access, Google Earth, and disappearing frontiers, Sweeny had been searching for the next true coastal adventure. His quest brought him to the book The Unknown Mountain, the story of the Munday’s “relentless pursuit of a particular objective,” according to Sweeny. The idea of re-creating that pursuit to pay homage to the explorers who set the bar for coastal exploration began to coalesce in Sweeny’s mind, taking hold with the same power that Mystery Mountain had over Munday.

The mission represented adventure in its purest form. Known today as Mount Waddington, “Mystery Mountain” is the tallest peak in the Coast Range. Accessing it requires sailing through the Georgia Strait up the Inside Passage, navigating tides and notoriously volatile weather. This is followed by days of bushwhacking and unholy elevation gain through some of the most rugged country that defines the British Columbian coast. And that’s just to reach the snowline, which then calls for glacial travel and mountaineering—if conditions permit.

Sweeny aimed to achieve it all via human-propelled means, exactly as the Mundays had. He spent two years poring over maps, laying plans, and assembling the Arc’teryx team that would undertake the epic: photographer Jimmy Martinello; videographer and maritime captain Bradford Arthur; pro skier Eric Hjorleifson; and the last member of the team, Christina Lustenberger (Lusti), a reincarnation of Phyllis Munday’s drive, leadership, sense of adventure—and penchant for crushing it.

As a pro skier, ACMG certified ski guide, and former World Cup racer known for pushing limits in the backcountry and massive first descents, Lusti has quickly become one of the foremost, big mountain skiers in the world. And just like Munday and Sweeny, she couldn’t resist the draw of Mystery Mountain.

“The Waddington Range is like the Chamonix of the coastal mountains,” Lusti says. “There’s so much history there that goes way back. As a skier, I’m drawn to these deeply-enriched skiing locations because you hear about them when you’re growing up.”

Known today as Mount Waddington, “Mystery Mountain” is the tallest peak in the Coast Range. Accessing it requires sailing through the Georgia Strait up the Inside Passage, navigating tides and notoriously volatile weather. This is followed by days of bushwhacking and unholy elevation gain through some of the most rugged country that defines the British Columbian coast.

Lusti’s grandmother told her stories about the legend of Phyllis Munday. By the time Mystery Mountain began dominating her ambitions in 1925, Munday was already an accomplished mountaineer, having become the first woman to summit Mount Robson the year before. Her husband Don was no slouch of an alpinist either. In fact, the two met on an expedition with the BC Mountaineering Club, a trip on which Phyllis saved Don from slipping into a crevasse on glacial moraine. The incident sealed their fate as soulmates and expedition partners for life. But as Don wrestled with the PTSD that haunted so many soldiers after World War I, Phyllis became the driving force for their exploratory missions—including their decade-long pursuit of Mystery Mountain. The couple spent two months of every year heading deep into the wild, repeatedly drawn to the elusive peak.

In late spring 2016, the Arc’teryx team set sail from Squamish up the Georgia Strait. They spent three days graced with good weather on the water, navigating tidal channels and tight

timelines without incident. They spent the next three days backpacking up the wild country that embodies the phrase “Sea to Sky,” often using ropes, while carrying all of their gear for the subsequent alpine mission. Known for her almost inhuman ability to charge, Lusti led most of the way.

On the fourth day, low on food with a technical route ahead and a weather change on the horizon, Lusti urged a helicopter pickup to complete the leg to base camp in favour of prioritizing time and food for the objective of summiting Mount Waddington. The crew eventually agreed, although it represented a fork in the path from following the Munday’s completely human-powered route.

By the time the team made it to their camp on the Waddington Glacier, temperatures had started to rise quickly, dramatically decreasing the stability of the conditions. Crevasses were beginning to open and sag. The snowpack was isothermic. As they made their first attempt for the northwest summit of Mount Waddington via the Angel Glacier, it became clear on the ascent up the Dais Glacier on the south side of the mountain that conditions would shut them down. While the team did summit Mount Munday and skied around the area for nine days, Mystery Mountain dealt the same challenges it had dealt the Mundays all those years before.

“Mountain conditions trump anything, and that’s just how it rolls out,” Sweeny says pragmatically. “There’s a reason the Mundays pursued this for ten years. We were naïve in a way, to think our first year would be a success.”

Mystery Mountain isn’t done with Sweeny yet. He sees the intervention of the helicopter as a deviation from the true intention and value of the adventure and intends to go back for the peak. He is already laying the groundwork for a return in May 2018—all human-powered, in homage to the great legacy of Phyllis Munday.

“I appreciate her perseverance,” says Lusti. “Now people don’t have the patience for what the Mundays did because there are so many other options, like flying in with a fixed wing or a heli rather than coming from the ocean and gaining so much elevation. It’s incredibly inspiring what they were able to achieve.” 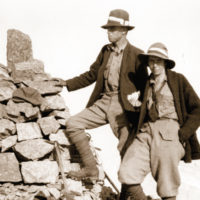 TRAILBLAZERS: DON & PHYLLIS MUNDAY
Next time your parents complain that you are wasting your life playing in the mountains, tell them about Don & Phyllis Munday’s lifelong love affair with British Columbia’s mountains and how it’s as celebrated as any chapter in our province’s mountain lore, including the second ascent (and first female ascent) of Mount Robson on their honeymoon in 1924…. Read more