There comes a point where living the dream often translates into having the chance to introduce your kids to the things you live for. You don’t want any put-em-in-boxes gender stereotyping crap undermining the passion that you managed to cultivate and nurture through the early morning battles to get their gear on or all the powder day laps you forfeited snowplowing down the bunny hill until they found their feet.

Today’s kids have enough working against them as it is, without someone telling them they shouldn’t take up space in the mountains because they’re a girl…

When Paige Bell’s about-to-be 10-year-old daughter asked to spend her birthday skiing, the request felt like a small parenting win.

All the early morning battles and missed pow days trying to pass her passion on to the next generation were finally paying off for Bell, a ski guide and 25-year volunteer with Whistler Search and Rescue.

“There were literally years skiing around with her yelling at my back, ‘I hate you, you are the worst mummy in the world,’” says Bell, drily.

At the end of the birthday ski party, the pre-tween guests gathered at Bell’s mountain cabin in Pemberton and watched one of the year’s newest shred films, a 40-minute opus to their home hill’s bigness, featuring a superstar cast of local athletes.

“Where are all the girls?” one young guest asked. Watching the ski action unfold, the children became perplexed. “Yeah, we want to see more girls.”

While a lack of female athletes is fairly synonymous with big mountain action sports films, an over-representation of male skiers doesn’t represent reality to these girls—not when they look around at their mothers, their neighbours, their babysitters, their friends, or each other.

Although she was often one of the only girls skiing with a posse of guys, what shocked her the most was that so many of the independent, adventurous women she would meet were in total denial of the word feminist.

And that matters to Bell, an ACMG (Association of Canadian Mountain Guides) ski guide, who at age 47 is among the most proficient mountain people in the corridor. “Having a daughter and seeing little girls that rip around is so much fun,” she says. “They don’t have to be the best out there, they just have the psych. To play in snow or in the mud, even. I don’t want to see that knocked out of them. I want them to see strong female athletes represented.”

Bell grew up with her mom, a woman who moved three energetic, mud-playing toddlers into the backwoods of the Ottawa Valley after her marriage dissolved. The family started again in a mobile home on an old, 300-acre farm. Despite the constant presence of a strong, independent role model, Paige was too shy to be a fierce and feisty child, but she was always a feminist.

After procuring a degree in Film Studies, travelling to India, and spending one summer tree planting, Bell arrived in Whistler at age 23. Whistler felt like university without the school work and Paige picked up work at McConkey’s, an infamous Whistler retail ski shop named after Whistler Mountain Ski School pioneer, Jim McConkey. Naturally, she soon became hooked on the idea of becoming a local ski bum and quickly fell in with whoever was the hardest skier on the mountain, keen to elevate her childhood skiing skills into west coast mountain chops.

Although she was often one of the only girls skiing with a posse of guys, what shocked her the most was that so many of the independent, adventurous women she would meet were in total denial of the word feminist.

“It was a bit shocking to come out from that intellectual world of studying women in film at university to coming out here, where feminist was a dirty word. Women that were so strong and doing all these things would outright deny that they were feminist. I was like, what do you mean you’re not? Men are feminists! Women are feminists! If you believe that women are capable and should live that way, then you’re a feminist. It’s not a bad thing!”

But it was as forbidden as a four-letter word.

“It just killed me.”

Paige’s journey to take her skiing from passion to profession came after almost a decade of tearing around the Coast Mountains by day, and a nighttime gig serving food and beers at Citta’, a legendary Whistler watering hole. Clearing away dishes finally wore thin.

Perhaps the mountains brought it out, but somewhere along her journey, Paige found her fierceness and feistiness, but now that she’s a mother, it’s accompanied by a tenderness.

Passing her ski guide exams was harder than getting her university degree. But she did, and went on to guide at Selkirk Wilderness Skiing, CMH Nakusp, and Whistler Heliskiing. She taught at Outward Bound and continued with Whistler Search and Rescue, a position she began in 1995 after being part of an extensive seven-day search for a friend who was lost on the mountain.

Perhaps the mountains brought it out, but somewhere along her journey, Paige found her fierceness and feistiness, but now that she’s a mother, it’s accompanied by a tenderness.

“Me, my mom’s generation— we’ve all been saddled with this idea of not being too aggressive and being pretty and being likable. And I don’t want my daughter to be stuck with that. You can be aggressive. Not everyone is going to like it. But say it like you feel it is. It’s not equal right now. It’s not all good. And we need to still keep working on it, instead of being okay with just seeing the token women in the ski movie.” 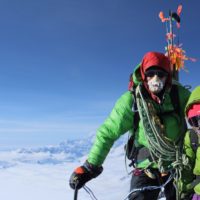