Art has always been a grounding force for Lan Yao. For the first eight and a half years of her life, Lan lived in Beijing, China, where the rigid communist government largely controlled the actions of its citizens. Art offered an escape.

In Beijing, everything was so manicured. School children would march home after school in organized lines emanating outward from the school to their respective neighbourhoods. Stepping in unison down concrete streets, Lan recalls passing small squares of green grass guarded by signs saying, “Stay off! You will be fined.”

“I would sit for hours,” Lan says. “I had to study every subject, every day. It looked like I was doing homework but I really wasn’t.” She laughs. “I used to just draw creatures all the time, on the edges of my notebooks. I drew these numbers that were also people, and they kind of hung out with one another… Breaking the rules without breaking the rules… Anarchy sitting still.” 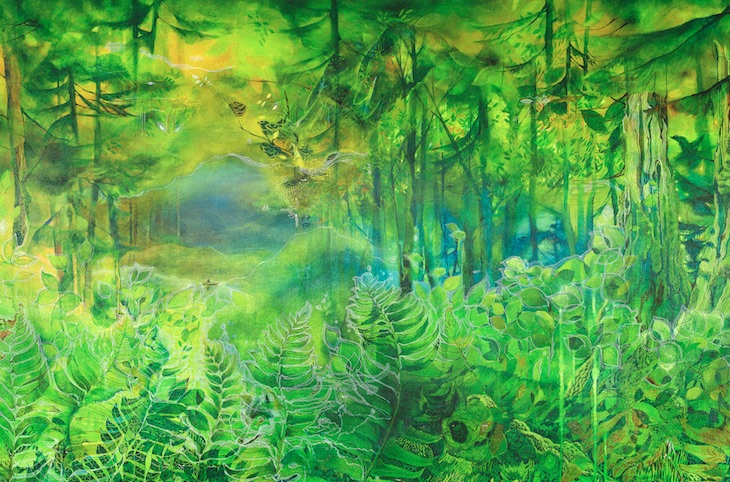 With a stressful school system and strict parents with high expectations, Lan says her salvation came when her parents enrolled her in traditional Chinese watercolour painting. “I’m really glad they put me in,” she says. “Even though it has a lot of rules, the one thing it teaches you is to be very free with your line flow. It was the only class I felt free to move.”

Chinese watercolour is an artform where the actual physical movement of the arm is expressed in the painting. “The feeling of the line is part of the painting. This style is still in my work, I always start with a wash, and line flow is very important to me. I love Rodin for this, even though he is known as a sculptor, he has the ability to translate feeling and motion into a simple line. Leaving it open to interpretation.” 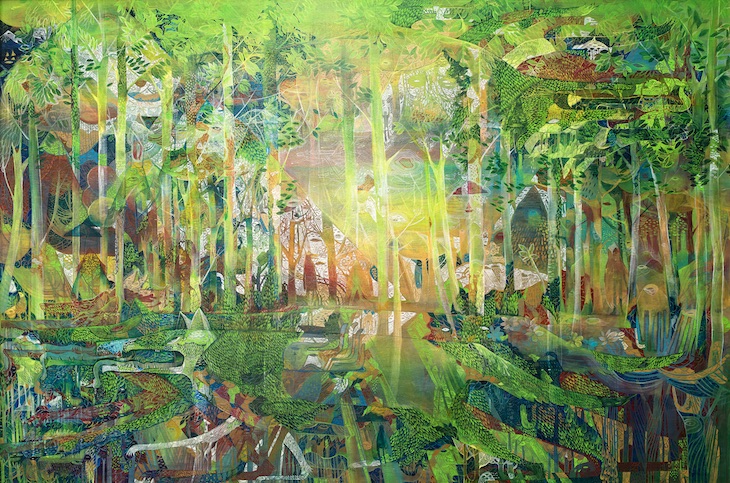 When she was nine years old, Lan’s family moved to Canada. It was a sudden and surprising change of scenery. “We moved to Edmonton originally. The flight landed in Vancouver, so we caught a bus to Alberta and driving through the Rockies was unlike anything I had ever seen before, everything was so wild. It was almost kind of terrifying, but exhilarating, exciting.”

“The struggle of balance,” she continues, “the underlying challenge to not overdo it. I have to forget that there will be an audience and remember just to paint the things I want to.

Lan’s new Canadian art teachers supported her painting, and by the time she entered high school, they had elevated her curriculum to equal the first year of art school. “I was asked to consider how and why I painted.”

This led to the Emily Carr University of Art + Design in Vancouver. After graduation, Lan returned to school and pursued 3D animation after a friend spoke highly of the paycheques. “I hated the projects,” she says, “but I liked the people. And I made a lot of money, but I wasn’t really happy… I was so burnt out and beat down from scraping by in Vancouver. Trying to pay my rent, I was so focussed on that. I left art school thinking I wouldn’t be an artist. I didn’t realize there were people living in their cars.”

This is when she met Ben (her now partner) who lived in a Toyota Tercel with a tiny wood stove (yes, a subcompact car with a chimney). “I didn’t know there was a way to do it differently,” Lan says, “but of course there is.”

Lan left the animation company she had worked at for seven years and moved to Squamish, picking up odd jobs around town and spending her free time running and climbing. The physical freedom created a space for Lan to gravitate back to painting. “I just like observing and taking in details and what’s going on around me—anything, a certain colour, or a certain shape of a building or a person’s face. Inspiration from tiny details, moments, all put together.”Lan’s relationship with Ben and his life of simplicity has helped her find her happy place, a place that allows for artistic growth. Not that it is always an easy path, but it is hers. “As a full-time artist, it’s been hard,” she admits. “I still enjoy painting, but it’s hard not to think about the money… You gotta live, after all.”

“The struggle of balance,” she continues, “the underlying challenge to not overdo it. I have to forget that there will be an audience and remember just to paint the things I want to. Wake up and say ‘oh, I want to paint this.’ Because it’s the process that I have fun with, it’s not about the finished product. Sure, that’s evidence of the process, but I think it’s more about the experience of the process… I get kind of sad when a project is over. It’s like ‘oh what was the big deal, that wasn’t that hard.’”