Jorge’s Disclaimer: Ace’s brother knocked up my sister twice, so we are kind of related – our gene pools have joined forces. I have also known her for 30 years. This doesn’t count as one of the facts.

FACT #1 AS A CHILD, ACE SKI RACED AGAINST WHISTLER AND CANADIAN DOWNHILL LEGEND ROB BOYD.
Ace: “No. Not really. I raced against his sister, Sandra. But yes, my dad and Rob’s dad knew each other and I remember as kids when our parents go, “hey you have to meet so-and-so’s kids” and I remember meeting those guys. I was the only girl on my ski team, and I felt like I was kinda shy, but I think it was because all the ski racer girls seemed so… tough. I didn’t have padded race pants for a while so I would race in jeans with fashion magazines tucked into them as padding to protect my hips and elbows from bruising on the bamboo gates. I remember the teams from Kelowna were all these girls with fancy gear and I always felt like a real loser at the top of those races, but Sandra Boyd was always nice to me. Now I have ski jeans, but the waterproof version.” 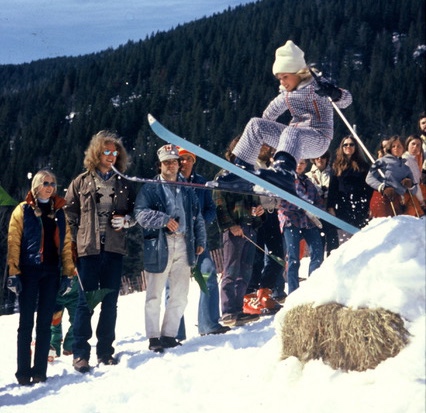 FACT #2 ACE’S DAD WAS THE BOSS OF TOD MOUNTAIN, AND THEY GAVE AWAY A CAR TO THE BEST FREESTYLER.
Ace: “Yes, kind of. My dad was originally from Ottawa, the only one of his family who came out west. And he met my mom in Lake Louise. I was born in Calgary because there was no hospital nearby. My dad was a ski school director at a couple hills, then he got a job at Tod Mountain outside of Kamloops (now Sun Peaks) and ended up managing the mountain. He’d throw this annual party, Wonder Weekend that was a family fun weekend on the mountain with obstacle courses, gully-skiing contests, costumes, jousting on skis, and a bum jump and other antics. It was awesome, my favourite weekend. But my dad did also host a freestyle contest called the Labatt’s Datsun Freestyle Classic, it was the hotdoggin’ era, and one year the grand prize was a Datsun 280Z. Another year, they gave $10,000 to the winner. In the 70s! I think our house only cost $15,000 back then.”

FACT #3 ACE ONCE PLAYED CHARADES WITH KEITH RICHARDS (AND CO-WROTE A SONG FOR BILLY IDOL BUT THAT’S ANOTHER STORY).
Ace: “I was in Antigua. My boyfriend was friends with Keith Richards, who also used to go there with his wife Patty and their two daughters. Another musician friend owned “Pizzas in Paradise.” On the menu it had drink prices just for Keith because his drinks were stronger. 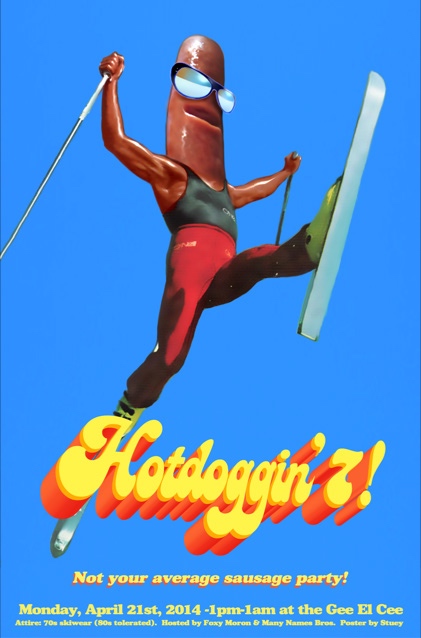 He drank Jack & Jills (Jack Daniels and ginger ale). Anyhow, we were invited up for a dinner party at their place and after dinner we played Pictionary and charades. Someone put his name into the hat and, unluckily, I pulled out his name. I was about 20 at the time and I had to act out Keith Richards to Keith Richards. It was the worst. At first I was playing air guitar, probably so lame and everyone was yelling out every other guitarist in the world. So then I tried acting out his way of drawing at Pictionary and he yelled out, ‘Me!’ Ha!”

FACT #4 EVERYTHING ACE KNOWS SHE HAS TAUGHT HERSELF, BECAUSE SHE COMES FROM BEFORE “HOW-TO” YOUTUBE VIDEOS WERE A THING.
Jorge: “You have had photography published in the New York Times and also extensive cinematography (on film and video) for a number of Greg Stump ski films, commercials, short movies and music videos. You are a DJ, accomplished seamstress, decorator, writer, radio host, event organizer, graphic designer, a really good skier, go-go dancer, and four hundred other rad things.” 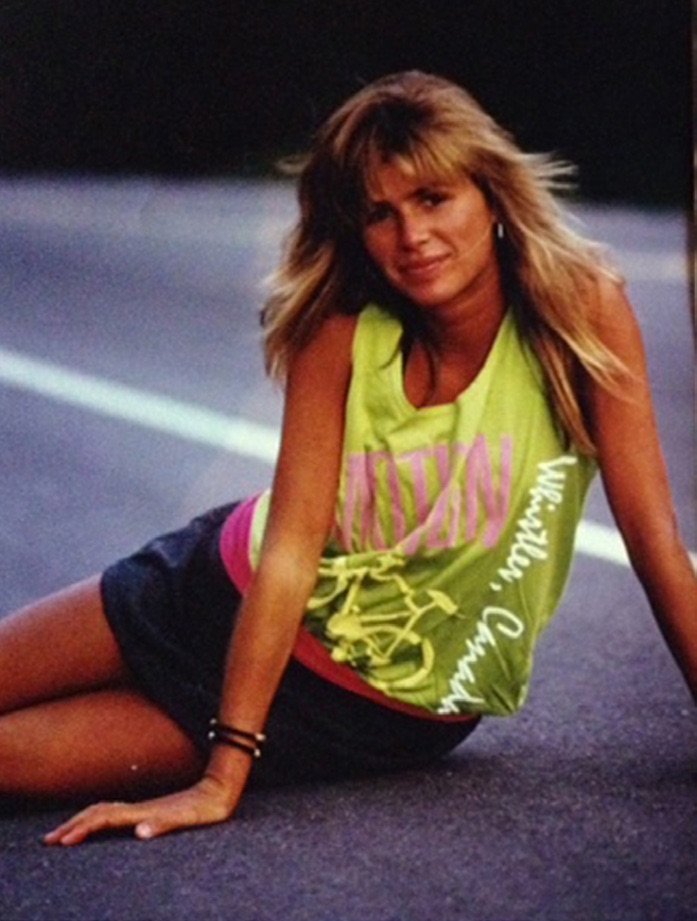 Ace: “I was also a waitress, that’s what I did when I moved to Whistler in 1987. I kind of miss it sometimes because it gives you a reason to go up and talk to people you don’t know. And figure out how much you can joke with these people, when to back off, etc. I think Whistler is funny that way, if you want to stay here, especially if you are not in a career job, then you have to have multiple jobs. For me, I didn’t go to university because I didn’t know what I wanted to do, so I used my saved money to travel around Europe for a year. I came home to work at Expo 86 and then ended up in Whistler. Back then, there weren’t all the businesses there are now so if someone needed decorating for a party they’d ask, ‘can you do this?’ I would say, sure. Then other things would come up and I’d say yes, and then figure out how to do it. Whenever something in my house stops working, I always take it apart and try to fix it. And if I can’t fix them I turn them into a costume. That’s how ‘ToasterHead’ was born.”

FACT # 5 ACE IS NOT A FEMINIST.
Ace: “A humanist, that’s what I am. I would describe myself as a humanist, not a feminist. Although I am a feminist as well (all good men are too), but humanist is more inclusive. When I ride the chairlift with someone I always want to be welcoming, so I don’t actually ever ask people ‘where are you from?’ I ask, ‘do you live here?’ I’m assuming they’re local instead of making them feel like a tourist right off the bat. It works.” 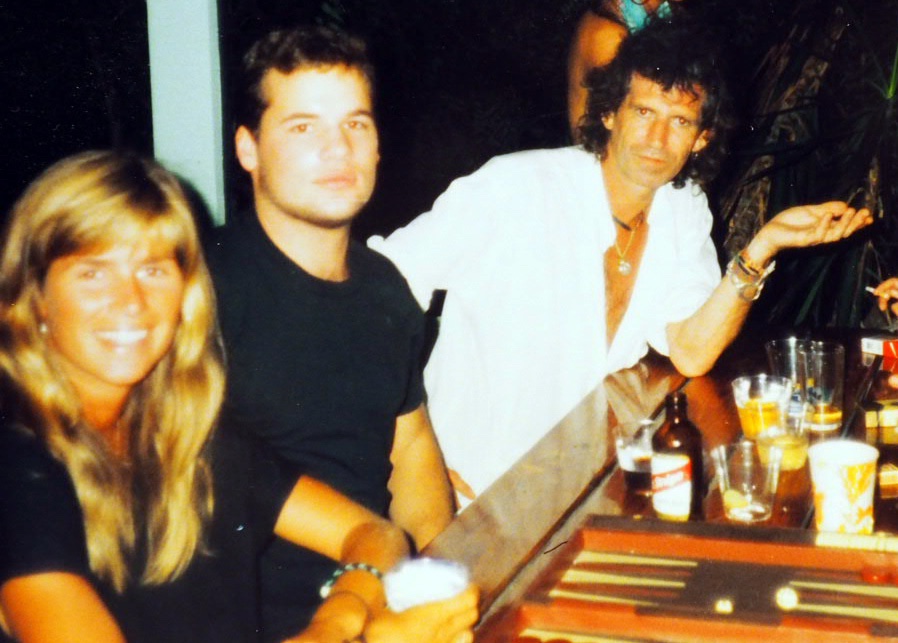 FACT # 6.9 ACE IS AN AQUARIAN FIRE HORSE, ALWAYS THE LAST PERSON STANDING AT PARTIES, AND HER LEGENDARY, ANNUAL HOTDOGGIN’ PARTY RIVALS RIO’S CARNIVAL, BURNING MAN AND MUNICH’S BEER FEST IN POPULARITY. PEOPLE COME FROM OTHER GALAXIES TO ATTEND, WEAR RETRO SKI GEAR, AND COMPETE IN SKI BALLET.
Ace: “You have never come though, Jorge. You should come. It comes from growing up on a ski hill and ‘cause my dad isn’t around anymore, it’s carrying on his tradition of a fun ski party. This year is the tenth anniversary, so we might have to give away a car.”