Before Roger Bannister famously ran a sub-four-minute mile in 1954, the feat was thought to be impossible. Yet in the years following his record-breaking run, a flood of athletes was suddenly capable of the same accomplishment.

“When a young girl sees an athlete they can identify with, such as a woman in her favourite sport, something is triggered in the brain,” explains Vancouver-based sports psychologist Michelle Newton. “What may have previously seemed difficult or impossible suddenly seems accessible and achievable. That’s why you need to find your champion as a girl. Just find that person who has your back. It could be a coach or another athlete.”

And the proof is on the podium. Teigen Pascual is a 14-year-old Squamish BMX racer who recently took home the gold at the 2017 Race of Champions in Tulsa, Oklahoma. She also snagged fourth at the American Grand National that same weekend, enroute to finishing third in North America in her age group for the season.

“It felt awesome,” Teigen says of the victory, adding that performing that well in front of coach/mentor/ex-US National Team BMXer Arielle Martin was extra amazing. “I never thought I was going to win, so it just means all that training has paid off.”

“Teigen has so much fire,” says Arielle, who lives in Virginia, USA and coaches Teigen primarily through real-time video analysis combined with Skype, text, and phone calls. “She’s very receptive to feedback and coaching, it’s really cool to see her get these results and know that I am getting through to her.”

Beyond her work with Arielle, Teigen’s local Sea to Sky training regimen includes practicing fast starts in a race gate her parents built in their garage, regular strength and conditioning work with coach Jayde Quilty, and riding bikes with gymnast-turned-downhill-mountain-bike-racer Jaime Hill. Both women call Squamish home and, like Arielle, understand the value of mentoring young, local athletes.

“All young athletes can benefit from that mentorship with someone they can relate to. And the lessons they learn – overcoming obstacles, achieving goals, breaking barriers – these skills will translate to other aspects of their lives.”

Working out of CrossFit Squamish, Jayde Quilty coaches a number of athletes, including groups of girls aged 9 to 17 with a focus on teaching skills to improve performance in sport while also building confidence and bonding with other athletes. Jaime Hill is also involved with Ride Like a Girl, a BC-based program that pairs young athletes with a mentor. They go for a couple rides in a year, and the athlete can talk to their mentor about race strategy or get help writing sponsorship proposals.

She points to Santa Cruz’s women-focused bike line, Juliana, as an example. The bikes are basically the same as the men’s version, but a quick visit to julianabicycles.com instantly reveals a key difference: all female athletes – not models – repping the brand. 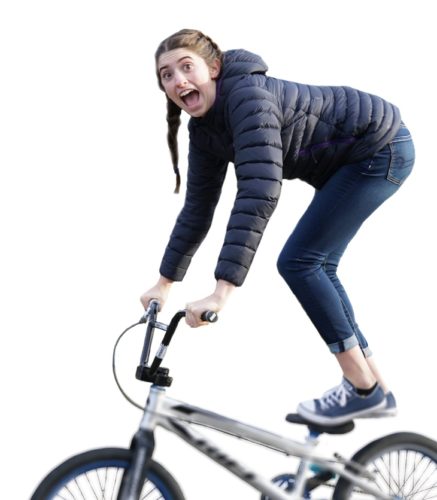 “Just girls shredding and doing rad things,” Jaime says, “and you don’t see that with most cycling brands. It’s building a sense of community.”

Put simply, young girls are more likely to join up and stay with a sport if they can relate to someone who has already paved the way – the Bannister Effect. “In my career, most of my coaches were men,” says Arielle Martin, adding that BMX is still a male-dominated sport. “They were great coaches, but I always yearned for that female perspective within my sport. All young athletes can benefit from that mentorship with someone they can relate to. And the lessons they learn – overcoming obstacles, achieving goals, breaking barriers – these skills will translate to other aspects of their lives.”

And while Teigen’s parents have always raised her to be awesome not just as a girl but as a person, her efforts and success on her bike have begun to position her as a role model to some of the younger riders on her team and around town. Other parents already approach her and say that their daughters, and sons, look up to her.

Asked if that makes her nervous, Teigen doesn’t hesitate. “No,” she says. “It makes me feel pretty good because I have had my role models and I look up to them a lot, so if I can be that for someone else, that is really cool.”

A mentor in the making, one pedal stroke at a time.