For over a week I was obsessed with the data from the weather apps Windyty and Windfinder. In particular I was stoked about the potential of high north winds and large waves projected to develop along the eastern Lake Huron coast. From the various sources it appeared that the highest winds would hit around Southampton. 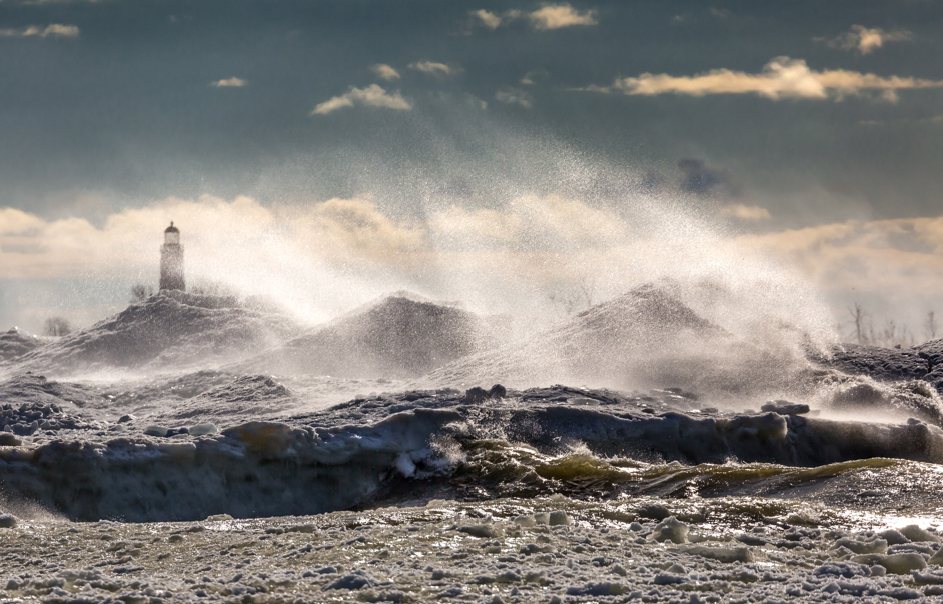 What fellow photographer Steve Biro and I didn’t know as we left Windsor was that the shoreline around Southampton contained a large number of huge ice “volcanoes”. Known as cryovolcanoes, they form along the shore throughout the Great Lakes, and can range in size from one metre to eight or more. They occur in high wind areas where ground-level temperatures are slightly below freezing and develop as a result of large waves crashing into an ice shelf. The dynamic energy involved creates cracks and hollows in the leading edge of the shelf while building up the ice in layers as more water breaks over and freezes onto a hollow cone of hardened ice. The end result is an ice volcano which spews plumes of water and ice instead of lava.

Steve and I arrived at the Southampton pier around 4pm and the conditions were insane. The 60kph-plus winds were being driven right into the concave centre of the eight-metre ice volcanoes at which point the force of the wind and water would explode high into the air, sending a blizzard of water and ice chunks flying…

I’m a cold-weather guy. I thrive in cold environments which I prefer over warm climes. Despite this fact, when Steve and I arrived in Southampton on the afternoon of March 22, 2017, I was worried about my hands. Too many times over the years I had disregarded the cold to get the shot. I’ve tried various gloves and mitts but usually end up taking them off periodically in order to fire the shutter or make small camera adjustments. Many times my hands would suffer as a consequence and this day was no exception. The day was cold by most standards. With an air temperature of -7°C, it warmed to a high of -3°C. Factor in the 25-40kph NNW wind and 60kph gusts and the wind chill temp was around -16°C (historical average 4°C). 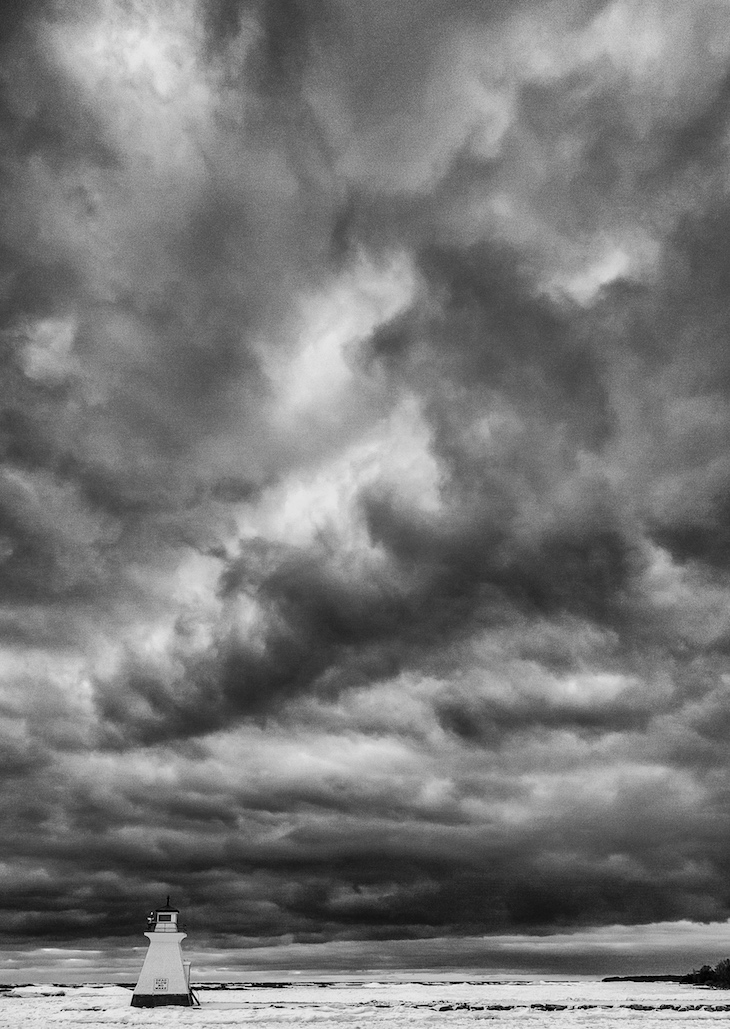 Steve and I arrived at the Southampton pier around 4pm and the conditions were insane. The 60kph-plus winds were being driven right into the concave centre of the eight-metre ice volcanoes at which point the force of the wind and water would explode high into the air, sending a blizzard of water and ice chunks flying 100 metres across the shore. The Chantry Island lighthouse (completed in 1859) provided the backdrop to a scene straight out of storm-swept Atlantic Canada.

Steve and I donned our snowsuits and headed out into the maelstrom. On the pier we held on to the metal range light ladder while attempting to seek shelter for our gear from sudden breaking waves that swept over the length of the pier at intervals between shooting.

Our exhilaration at being in such an extraordinary place facing the forces of nature in all her beauty and fury was beyond words. I forgot all about my hands again and paid the price later that night. We ended up on the pier and surrounding shore for over four hours as we observed and recorded the sunset that followed at 7.47 p.m.

In an age where cellphones, video games and other distractions are all-pervasive, it is imperative that we cultivate strong connections to the natural world. What better way than to get outside and experience the natural world right at our doorstep on the shores of mighty Lake Huron? 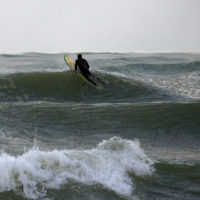 DEADLY TEMPS, ICE BOULDERS AND BLOW-HOLES: SURFING GEORGIAN BAY IN WINTER
On January 9, 2015, the mean temperature was -9C. That’s a cold day. Some would argue that’s too cold for skiing. But for Jim Schorer, Josh Madryga and Aaron Phillips, the perfect conditions on Georgian Bay meant it was a day made for surfing… Read more