In the arena of elite ice climbing, Gord McArthur needs no introduction. As a member of Team Canada, he placed fourth in the 2014 World Cup and is currently ranked 13th in the world. He is the 2015 North American Ice/Mixed Climbing champion, and is ranked 1st in Canada for World Cup Competitions. Last year, McArthur climbed a world-first D16.

The cave route, named Storm Giant is 80 metres, tracing the overhang of a massive cave. Between cleaning, bolting and working the line, McArthur spent three years on the project. Having established the most difficult dry-tooling climb in the world, and reaching what he calls the “pinnacle” of his climbing, McArthur sat down with us to tackle the inevitable question—what now?

Last time we spoke was just after you’d completed the Cave Route, what’s been happening lately?
I just got back from my World Cup tour. I compete with the Canadian national team for mixed climbing, so we went to Switzerland, Italy, France, and Inner Mongolia, which was wild, and harsh at the same time.

Do you have any big climbs on your radar?
I think after this last tour, I want to put all my attention into rock climbing for one year. That’s sort of my big project right now. I’ve been so focused on mixed climbing, and competitive climbing, and here we are 10 years later, I’ve completed the Cave Route, and I feel I’ve sort of reached that pinnacle. I’ve decided now that I’ve accomplished that, I’d like to step away from the ice axes for a year and actually see what I’m capable of doing in rock climbing.

Is it a case of boredom, burning out or personal progression?
Every year, I’ve come back from World Cup ice climbing in March, then rock climb for a couple of months, then start training again in June for ice climbing season. I’ve never really given myself the opportunity to see what I’m capable of in rock climbing. I don’t want to use the term “burnt out,” but after you’ve been competing for 10 years, and every single year, all the effort that goes into that—whether it’s the eight months of training, or the two months of traveling and living out of a suitcase—not to mention the money you spend, and the energy it takes. The Cave Route—that was like three years of dedication—maybe it’s just needing a break from that world.

“I’d like to step away from the ice axes for a year and actually see what I’m capable of doing in rock climbing.”

What is it that’s drawing you to rock climbing and not something completely different?
I’ll always be a climber. The thing about rock climbing and stepping back from the ice axes, is there isn’t that world of pressure of trying to being the best. Going into the rock climbing world—not to say that there’s no way—but really, there’s no way I’ll rise to the level I have in ice climbing. I’m not about to be the best at rock climbing, so it takes away a lot of the pressure of having to be the best and gives me the opportunity to really have fun with it. My goals are pretty lofty about what I want to achieve, but not lofty in the world of rock climbing, which is really freeing.

You’re also a coach. How does that outlook help you when you’re working with others?
I love coaching, and I feel that I’m pretty good at it, only because I have so much experience training and putting pressure on myself. And to answer the question directly, to be given the opportunity to share with these kids what it’s like, and what the actual focus should be. The focus should be on your climbing, and not ‘who can I get sponsored by.’ It’s a bit about protecting kids—not holding them back, but protecting them until they’re ready, by sharing what I know.

It must be rewarding to pass on that knowledge from experience.
For sure. I work with kids, like this one kid who’s the future of climbing in Canada, and you hear talk about sponsorship and what not. He’s 13, and you just want to stress, “Just wait. Enjoy what you have now before you get overwhelmed with the politics of it all.” I also try to stress that we aren’t our accomplishments.

“Our identities aren’t based on our performance; it’s just a part of us, not who we are. It’s a concept that takes a lot of work, and something I still struggle with.”

You touched on something I don’t think we like to talk about. We celebrate high achievers and glorify performance and accomplishments, but if. or when, it falls away, how do athletes deal with that?
It’s a great question. It’s something I’ve felt myself. Coming back from World Cups, in a sport I’m pretty specialized in, it’s like, ‘What’s left?’ It’s like you need to really dig deep to answer that, because you do really deeply attach yourself to that world [of competition]. Our identities aren’t based on our performance; it’s just a part of us, not who we are. It’s a concept that takes a lot of work, and something I still struggle with.

So how do you stay grounded?
First of all, it’s family. I’ve got a wife and two kids, and that takes work—it takes a lot of work. Especially with my girls right now, who are 12 and 11. They are full-on. You have to separate yourself from your own desires, because they have to get to their sports, and their school things, so you have to put yourself aside, and that has to come first. But I think what keeps me most grounded is trying to be a better person. And then going into my climbing gym, being a business owner—yes, it’s climbing and in that industry—but it just demands so much respect, and commitment as a person. If you want your business to succeed, you have to put your whole heart into it. It’s been challenging for me. In the past, it’s been all about the climbing—it’s about you, and you go do it, and that’s great, but it’s all very self-based. Being a father and a husband, and a business owner, it’s not all about you.

“In the past, it’s been all about the climbing—it’s about you, and you go do it, and that’s great, but it’s all very self-based. Being a father and a husband, and a business owner, it’s not all about you.”

Tell us about the “Machine”
Also known as the backyard? It’s a 30-foot arch wall with 60 feet of bouldering cave. It was, uh…yeah, it was awesome. Sometimes at night time, you could go four blocks away and see it shining above my house, kinda like the bat signal. It became world renowned, which is kind of funny, but it sort of set the bar of what you can do on a personal level—if you don’t have the resources naturally, you can build it yourself. It gave me so many opportunities to go out and perform on so many levels. I mean, the reason I built it is so that I didn’t have to leave home so often. I could be home with my kids after school, I could be with them for dinner, put them to bed, then go outside and train. I had people from all over the world coming here to train. Because it was so specific, and there really wasn’t much else in the world like it, especially in North America. It’s kind of a sore spot right now, because we just sold the house, and we need to take it down. It’s interesting, because with me stepping away from ice climbing for a while, and having built it for that very reason, it’s sort of fitting in a sense.

“Sometimes at night time, you could go four blocks away and see it shining above my house, kinda like the bat signal.”

I understand you climbed 24 hours straight for charity.
I did. That was probably five years ago now. Friends of our family, their daughter had brain cancer and was living in Ronald McDonald House, which is an amazing organization. The parents couldn’t work, but had all these bills to pay. A close friend of mine, Will Gadd, did a similar thing where he climbed for 24 hours for an organization in Nepal. I was sort of inspired by that. I built a climbing wall by a local café and set out to climb it for 24 hours. I think the amount I climbed was just shy of the height of Everest, like 25,000 metres.

“I’d been throwing up and cramped for the last hour, but all of a sudden I had this super human power to continue what I set out to do, because I could see what I was doing it for.”

Damn.
It was crazy, and we raised over $20,000. We gave $10,000 to the family, and $10,000 to Ronald McDonald House. It was tough, but everyone came out from the community, like massage therapists to help me move after so many hours of climbing. During the last hour, the family came out. I’d been throwing up and cramped for the last hour, but all of a sudden I had this super human power to continue what I set out to do, because I could see what I was doing it for.

Finally, what feeds your need for adventure?
I think having a pretty rough upbringing, and never having the chance to explore what I was capable of. I think climbing, as a sport, has always given me that opportunity. I’ve competed in downhill mountain biking and tennis, and other sports at a high level, but there’s something about climbing that opened a door and said, it’s not over yet. Is it about being a better person, or pushing me in sport, or exploring what my body can do? I’m not actually sure what that means, but it keeps going through my head— it’s not over yet.  It’s those words that keep going through my head —it’s not over yet—and climbing seems to be my outlet to explore that.

“There’s something about climbing that opened a door and said, it’s not over yet. Is it about being a better person, or pushing me in sport, or exploring what my body can do? I’m not actually sure what that means, but it keeps going through my head— it’s not over yet.”

For more on Gord McArthur check out http://gordmcarthurclimbing.com 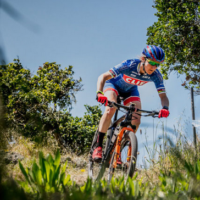 CATHARINE PENDREL ON CONSISTENT PERFORMANCE AND AVOIDING BURNOUT
Three-time Olympian and 2016 Bronze medalist Catharine Pendrelgrew up riding horses in New Brunswick, Canada. At a young age she discovered mountain biking and the rest, as they say, is history. She has two World Championship titles for Canada and 40 World Cup podium finishes under her belt… Read more 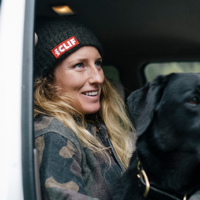 CASEY BROWN ON SAYING YES TO OPPORTUNITY, THEN FIGURING IT OUT
Casey Brown isn’t your typical mountain girl turned mountain biker. Growing up the youngest of five on a 300-plus acre farm in New Zealand, Casey was quick to take to an outdoor lifestyle that included wrangling sheep and riding horses. Her family moved to Revelstoke, BC when Casey was 11, and that’s when she began pursuing competitive skiing and snowboarding. Mountain biking was more of a hobby, something she enjoyed doing with her family… Read more