Ever wonder what it’d be like to do laps at Blue all night long? The 24h Blue Mountain relay can help make that happen. The fundraising event is new to Blue Mountain, taking place February 24-25. Geared towards providing financial aid to causes directly committed to improving health and well-being, this relay-style race gives adult teams of 6-12 the opportunity to suit up and give’r for 24 hours of downhill. This year, the event is presented by Freedom 55 Financial and funds will be raised for Special Olympics Ontario and the Collingwood General & Marine Hospital Foundation.

The idea got its start at Mont Tremblant and has grown spectacularly; the 2017 edition saw enrolment of over 300 teams and raised $3.8 million. Racers can register a ski club team, a company team, or an open team, and individuals are also encouraged to sign up. The target for Blue Mountain’s first year of 24h is $400,000—25 percent more than Tremblant recorded in their year one.

In the old days, race laps were recorded by hand on paper, but now racers are outfitted with the same types of transponders used on F1 racetracks. At the top of the hill, the pass over a mat files each team’s lap time and frequency.

The target for Blue Mountain’s first year of 24h is $400,000—25 percent more than Tremblant recorded in its year one.

Event organizer Michael Ney tried to bring the event to Blue about 10 years ago, but the stars failed to align at that time. Then some years later over a coffee, Ney and Blue Mountain President Dan Skelton agreed to move forward with the project while chatting in the Village Starbucks. The first 24h Blue relay was supposed to run in 2017, but time constraints pushed it to 2018. That turned out to be a good thing when big sponsors and industry support came knocking to help lend a hand to make the inaugural event happen. 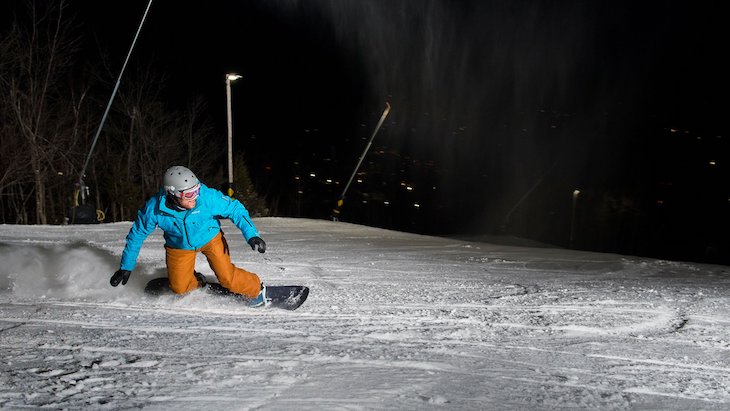 “That’s really what made it pull together,” says Ney. “My partner Frank Abel and I had a kind of heart-to-heart budget meeting and said ‘We have to do the event one way or another. If we have X amount of sponsorship and our budget is Y—well, we have to make up the difference somehow… even out of our own pockets.”

With Smart Alec as the designated relay course, Ney estimates that teams should expect to complete about 250 laps during the course of the relay. “We have a separate challenge for each of the private clubs. The whole thing is about participation. The clubs are very competitive from a social standpoint, and they will try to outdo each other at every single turn,” laughs Ney. “We’re hoping the same thing happens with the brokerage houses. Yes, there’s some friendly competition, you get two guys going down the hill together and suddenly there’s a race going on—but it’s all about the charities.”

The race isn’t all there is to do, either. Racers and visitors can expect live music, great food, complimentary hot chocolate and participant breakfasts, a killer après scene, and inspiring opening and closing ceremonies. Interested parties are invited to register at 24hbluemtn.ca. 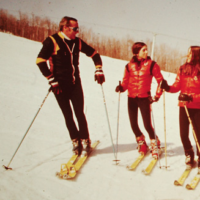 FROM THE VAULT: CELEBRATING 75 YEARS OF BLUE MOUNTAIN RESORT—PART 5
After 14 years of publishing Mountain Life in Ontario, we finally gained access to The Vault—Blue Mountain Resort’s historical archive stretching back to 1941, the year Jozo Weider founded the resort. For this 75th anniversary issue tribute we’ve searched through many boxes of unseen material and conducted interviews with BMR insiders. We’ve selected these 75 images and anecdotes—in no particular order—that commemorate life at Blue since that long-ago first winter season of ‘41/’42… Read more